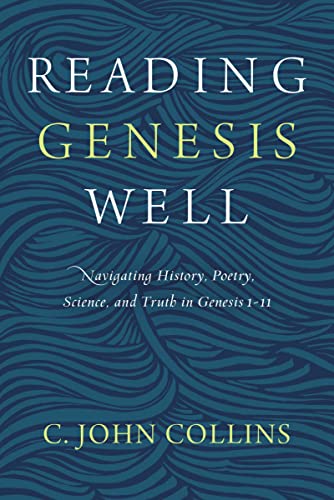 I have a very clever Catholic friend who once told me that an evangelical is someone who takes everything in the Bible literally—except when Jesus tells the crowd that unless they eat of his flesh and drink of his blood, they can have no life in themselves (John 6:53–58). The point is a fair one, and should stand as a reminder to all evangelicals that biblical inerrancy should not mean that every statement in the Bible must be taken in a narrowly literal, scientific way.

I myself believe in a historical Job, but I also believe that a good case can be made, from an orthodox, inerrant position, that Job is not history but a parable writ large. I also believe, despite my more literalist bent, that a strong case can be made, within the purview of inerrancy, that Genesis 1 is to be taken poetically, with the word “day” being used to connote eras of time. I am, in sharp contrast, unwilling to empty Genesis 2–3 of historical content, but more on that below.

Reading Genesis Well: Navigating History, Poetry, Science, and Truth in Genesis 1–11 is a provocative but carefully argued book. C. John Collins, professor of Old Testament at Covenant Theological Seminary in St. Louis and chair of the Old Testament translation committee for the ESV, does a masterful job sorting out, not only the literary genres of Genesis 1–11, but the specific kinds of language that it employs and the particular audience to which it is directed. Before he even touches on Genesis, Collins devotes a third of his book to surveying how language works, considering closely such elements as linguistics, rhetoric, and genre.

As I expected, Collins discusses different literary genres and how they should be read, but he goes much deeper than that. When reading passages in Scripture, whether Genesis 1–11 or the Sermon on the Mount, it is not enough merely to decide on the genre being employed. The careful reader must distinguish between the passage’s locution, “the actual form of words spoken,” and its illocution, “the intended effect of those words (on beliefs, actions, attitudes)” (p. 51). Often, as is the case with rhetorical questions (“Do I have to tell you that again?”) the focus is not on the words themselves as a propositional statement (locution), but on a certain behavior the question is intended to provoke (illocution).

Collins suggests, convincingly, that “probably most questions in the Bible are of this sort: ‘For if you love those who love you, what reward do you have? Do not even the tax collectors do the same?’ (Matt 5:46) is not a request for information but a device to shape the disciples’ way of leaning into their world, to define their community identity with a certain set of likes and dislikes” (p. 52). The same, he further suggests, is likely the case with most of the questions that God asks in Genesis: they “intend to offer the hearers an opportunity to do something, more than they express actual ignorance” (p. 52).

For communication to be carried out properly, whether face-to-face or through a book, speaker and hearer alike must be able to discern between locution and illocution. “To do this well requires both a social and cultural awareness … and a cooperation between speaker and hearer. In this cooperation the speaker must provide enough clues to his intentions, and the audience should be willing to go beyond the mere form of words, and to do so with enough sympathy with the speaker to perceive what he or she wants—compliance with the speaker’s intentions, of course, is another matter” (p. 60).

Collins insists that the Bible provides those clues, then calls on us as readers to do the hard work of coming into sync with the linguistic intent of the passage being considered. Most of the Bible, he argues, is written in ordinary or phenomenological language—“in terms of what things look like, without making much of a claim about the inner workings of the referents” (p. 63). Ordinary language can be distinguished from scientific (analytical) language and poetic (imagistic) language. The former has gained much prestige because it seems to speak a universal language, but that universality is achieved by “abstracting away everything that makes for particular cases, that is, for real experiences” (p. 67).

Now, lest Collins seem to be taking us back to Rudolph Bultmann and the demythologizing of Scripture, he does make it clear that “the biblical material speaks largely in terms of historical matters and of a worldview and asserts that these are true” (p. 84). In no way does he empty Genesis 1–11 of all historical content; the point of his book is not to write off Adam and Eve as mere myths. Nevertheless, he argues that the biblical authors were not so much concerned with scientific language as “with shaping the worldview of the people of God and thus equipping the faithful to play their part in the unfolding story of God’s work in the world” (p. 89).

That last sentence gets to the heart of Collins’s thesis. The literary-rhetorical-illocutionary goal of the Bible, including and especially the opening chapters of Genesis, is not to supply scientific information but to shape the covenant people, most of whom were farmers who were already aware of the different kinds of animals and the basic laws of nature that they needed to be in tune with if they were to feed themselves and their families. What sets Genesis 1–11 apart from Genesis 12–50 is that the latter chapters focus on the covenant God of Israel while the former reveal that that covenant God is the God of all the nations and that Israel was meant to proclaim that message to the pagan world around them.

Whatever evangelical readers take away from Collins’s book, they should pay careful attention to the way Genesis 1–11 would have functioned in the life and ministry of the people of Israel. When Genesis 12–50 is read in the context of 1–11, Collins explains, it becomes clear that “God’s calling of Abram [was] not simply for his own benefit but also for the rest of the world” (p. 113).

Once we grant that argument, and any close reader of Genesis 12:3 cannot help but do so, we are compelled to take seriously what Collins goes on to argue:

One of the chief themes of Old Testament messianic hope is the expectation that under the leadership of the Messiah, the people of God will succeed in bringing God’s light to the gentile world. The shape of this biblical story assumes that all human beings have a common origin, a common predicament, and a common need to know God and have God’s image restored in them. This assumption comes from including Genesis 1–11 in the story with some version of the conventional reading of the fall of the whole human family. (p. 113)

Note that Collins does not here reject an actual, historical fall; he merely seeks to emphasize the core of what Genesis 3 is trying to teach its original audience: namely, that the redemption story that the Bible recounts concerns all people and not just the Jews.

The various analyses that Collins performs in his book are too wide and diverse to summarize here; however, if the reader will (at least temporarily) concede to Collins his focus on illocution and on the kind of covenant history Genesis is trying to tell, he will learn much of value. He will likely disagree on many points, as I did myself with a number of Collins’s conclusions, but he will have his understanding of Genesis 1–11 expanded in many ways.

Collins’s style is, for the most part, lucid and accessible, though it bogs down at times and is a bit hard to slog through. I would have found it easier to slog through myself had Collins’s editor not made repeated use of the word “humankind” as a euphemism for man. I found this quite distracting, especially given that the ESV correctly translates the Hebrew “adam” as “Man” in Genesis 5:2: “Male and female he created them, and he blessed them and named them Man.” Still, Collins is to be commended for conveying his analysis with as little jargon as possible.