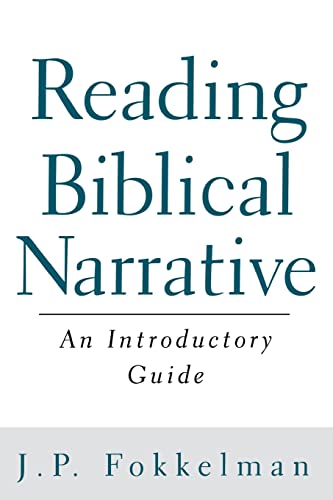 This is a clear and well-written introduction to the many aspects of reading narrative, and it has a particular merit in its focus on the biblical text rather than secondary literature. Indeed, almost no other scholars are mentioned in the book until the final suggestions for further reading, and the focus throughout is on capturing the experience of reading biblical narrative itself.

Fokkelman begins with a trial run on the brief story of Elisha’s miraculous provision of oil for a widow (2 Kgs 4:1–7) which he uses to introduce several of his general points. He then introduces ‘the art of reading’ under two rubrics: language and time. He suggests that the Bible presents itself for ‘plain reading’: without preconceptions and without any necessary theological prejudice which will make us squeeze the text into our own boxes. Biblical language then ‘redescribes reality’, and narrators construct their stories into certain temporal patterns. This last point is deftly introduced and allows Fokkelman to explore how stories speed up and slow down, present parallel events consecutively, and so forth, and thus construct and emphasise the world they wish to talk about. This makes for one of the best and most engaging presentations of what is essentially Paul Ricoeur’s thesis in Time and Narrative, taking the wary student of the Bible through something of a phenomenological minefield without dropping them in the jargon even once. The scholarship is worn lightly, and all manner of interesting insights into the biblical text are brought forth.

This is the great strength of the book. The author achieves similar clarity on a whole variety of narratological topics, along the way defining narratology as ‘largely a form of rhetorical analysis’. The idea of a ‘narrator’ is explored, suitably differentiated from God, but nevertheless possessed of a similarly omniscient perspective. Fokkelman rightly, in my view, defers from Sternberg’s view that the narrator’s voice is the voice of God, again without reference to other scholars. He also discusses the notion of ‘action’ through a look at how to identify a hero, a plot and a quest in a biblical story. Senders and receivers loom into view, but the student is once again guided to interpretive insight through this model without a single structuralist (‘actantial’) diagram, and without even hearing the word ‘structuralist’. Further chapters discuss repetition, point of view and the organisation of stories into acts and cycles.

Early on Fokkelman introduces a ‘practice arena’ of 12 stories which he revisits time and again to deliver examples of how it all works. These are drawn mainly from Genesis, Judges, and Samuel–Kings, reflecting his particular knowledge of the Samuel stories, on which he has written a 4-volume study of ‘Narrative Art and Poetry’. It is a pity that there is no index to the discussion of these stories, since I could imagine this book being a great aid to sermon and study preparation. Concluding chapters peer over the fence into a poetry-prose comparison (illuminating) and into the world of the NT, where he offers tantalising instances of similar narratological insights into Luke’s gospel. One might only wish for a book in which he would develop the NT material in further detail. He closes with some helpful questions to bear in mind when reading a story.

The book as a whole is very reminiscent of Robert Alter’s, The Art of Biblical Narrative (1981), perhaps containing more detail and more wide-ranging examples. It compares favourably to what should have been a similar work, David Gunn’s and Danna Nolan Fewell’s, Narrative in the Hebrew Bible (1993), lacking entirely the polemical bite of that work and handling issues of theological sensitivity irenically and, on the whole, fairly. It would make an excellent introduction to this most fruitful and refreshing of avenues into biblical narrative for a student who has already mastered the basic historical contexts of the biblical books. Questions remain, about how such an approach is best allied to a view of the Bible as Christian scripture, and thus to what end readers would engage with these stories in the first place, but while such questions must follow from such a study. Fokkelman will admirably guide the student to the point where they are raised.