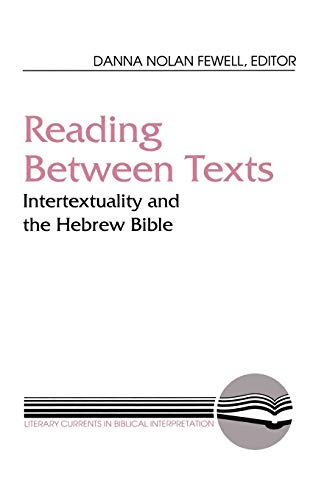 Reading Between Texts: Intertextuality and the Hebrew Bible (Literary Currents in Biblical Interpretation)

What is intertextuality? That is a question that until recently would not have been asked by many biblical scholars. Now, however, amidst the great upsurge of literary studies of the Bible, intertextuality is one of the key concepts for many practitioners. This latest collection of essays, all devoted to the theme, is a good opportunity to explore the meaning and implications of the concept.

In most general terms, ‘ “intertextuality” is a covering term for all the possible relations that can be established between texts’ (p. 44). This of course includes the familiar historically-oriented activity of tracing deliberate links between texts (citations, allusions, etc.), but it goes way beyond that. The basic assumption is that ‘all texts are embedded in a larger web of related texts, bounded only by human culture and language itself, (p. 17), and the corollary of this is that in principle any text may help interpret any other text. The linkage between texts ‘occurs without regard to chronology; that is, exchanged information moves backwards and forwards in time. It also occurs without regard to genesis; for example, the text credited as the source of others can and often is transformed through its contact with other, more derivative texts’ (p. 77). The abandonment of historically-oriented perspectives is deliberate. ‘Such a shift of perspective allows literary critics to rethink literature and literary history in terms of space instead of time, conditions of possibility instead of permanent structures, and “networks” or “webs” instead of chronological lines of influence. This novel perspective, in turn, proves very valuable to the critic who is interested in discussing—unimpeded by questions of historical development and influence—the various elements within one text that derive an extra dash of significance from their allusion to another text’ (p. 182).

What is the basis for this essentially revolutionary approach? ‘According to Thais Morgan, “the notion of intertextuality emerges from the cross-fertilization among several major European intellectual movements during the 1960s and 1970s, including Russian formalism, structural linguistics, psycho-analysis, Marxism, and deconstruction, at the least.” With its roots in the ideological battleground of Paris in the sixties and seventies, intertextuality is no neutral term’ (p. 181). Key theoreticians are Jacques Derrida, Roland Barthes and Julia Kristeva.

Since the approach implies an endless plurality of interpretations, the obvious question is what is the basis on which one may distinguish between better and worse interpretations. In general terms the potential indeterminacy of any text can only be reduced (or ‘contained’) by decisions on the part of the reader, and the crucial factor that motivates a reader’s decision is ideology. ‘It is in this way that intertextuality opens to ideological criticism. If ideology is a strategy of containment, then the interpretive rules in biblical studies which … legitimize certain intertextual relationships are certainly ideological’ (p. 32). Biblical interpretation reflects the interests of the interpreters and is in no sense a neutral, objective activity. As interpreters we are invited ‘to reflect on why we make the connections that we do’ (p. 20) and relate them to our social and ethical responsibilities.

I have concentrated on expounding the theory of intertextuality because the book presents it so clearly. I conclude with three brief comments. First, if the application of contemporary literary theory to the Bible is to be other than a passing fad of no enduring significance, then it must surely in some way attempt to take seriously the distinctive characteristics of the Bible, which must include its historical and religious dimensions, and its special relationship with Jews and Christians. Secondly, despite the problematic nature of many aspects of intertextuality, it is important to realize that in some respects it is much closer to ancient and medieval biblical interpretation than is conventional modern grammatico-historical exegesis; if links between texts are not historically conditioned and if the controlling ideology is a desire to witness to, and explore tire riches of, Jesus Christ in relation to living the life of faith, then you have the hermeneutical key to patristic biblical interpretation. So there are issues at stake that we neglect at our peril. Thirdly, the actual essays in the book are mostly fairly moderate outworkings of the theory; usually interesting, often suggestive; but all too often, to my rather old-fashioned mind, more or less implausible.