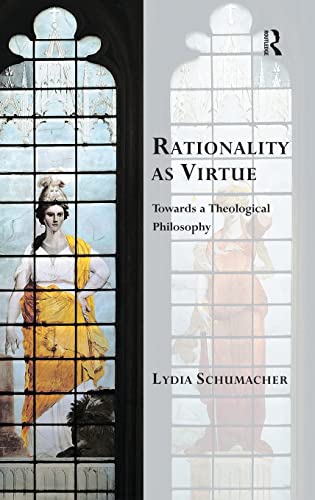 Rationality as Virtue: Towards a Theological Philosophy

The question of the Christian faith’s rationality is often treated in isolation from the equally pressing question of what, if anything, makes rationality theological. Naturally, the danger in asking the first question without the second is that the terms of inquiry are so easily prejudiced against critical analysis of what constitutes “rationality” in the first place. In this ambitious, two-volume work, Lydia Schumacher laudably refuses to separate these questions and attempts to answer them both. To this end, the author pursues two tasks. The first attempts nothing less than “a full-scale re-configuration of philosophy … to obtain a definition of rationality that is both amenable to faith and intrinsically more plausible than the definitions that tend to undermine faith” (Rationality as Virtue, p. 2). This “pro-theology philosophy” defines rationality in terms of a personal commitment to the summum bonum, which is upheld by the presence of certain intellectual and moral virtues. Equipped with this conception of rationality, the second task is to show how belief in the God of Christian faith in particular excels at—is even “arguably necessary” for—maintaining and fulfilling this conception of rationality (Theological Philosophy, p. 16).

From the outset Schumacher eschews “rationalist” and “fideist” approaches to demonstrating the rationality of faith, associating the former with natural theology. Voicing sympathies with projects like Reformed Epistemology and communitarian ethics, Schumacher desires to show how arguments for God’s existence must acquire a moral determination with material distinctiveness. Hence, she pursues an account of rationality that finds its ultimate exemplification in the life of the church, which is “the truest and most persuasive evidence of the reality of the Triune, Incarnate God” (Theological Philosophy, p. 173). This in turn tills the ground for a future project aimed at cultivating a “Trinitarian philosophy,” which seeks to demonstrate the “Trinitarian structure of all things” and its relevance for life (p. 192).

Rationality as Virtue sketches the “pro-theology philosophy” that becomes a “theological philosophy” in the second volume. The exposition hews closely to the thought of Aquinas and Aristotle, with varying degrees of proximity. She sets the stage by advancing a participatory ontology in which all creatures naturally develop or actualize their given potential and aptitudes over time. As rational creatures humans actualize this potential through acquiring knowledge, at which point Schumacher invokes Polanyi’s account of “tacit knowledge” to underscore the developmental character of knowledge itself, which includes an irreducible if general element of “faith.” Thus construed, knowledge progresses from expectant to fulfilled, and ultimately to informed “faith” (pp. 91–115). Since knowledge changes in this way, its progress or otherwise means a large role for the will, especially as one encounters reality through the passions. In order to maintain an objective encounter with reality, the cooperation of the intellect and will, along with the passions, must be regulated by intellectual virtues. Without such virtues, we are easily led to mistake the truth with our own predilections and ideologies. Intellectual virtues are for the sake of moral virtues, and the latter ensure the proper functioning of the former: the end of self-actualization is promoted only to the extent that we are committed to serving the highest good, which in turn leads us to serve the common good. So while it may be possible for someone to be “rational” without moral virtue, they cannot remain so consistently. In this first volume, Schumacher essentially asks what reason is for and concludes that its intrinsic ordination as well as only context for flourishing is in a virtuous way of life.

Theological Philosophy seeks to show how “belief in God … is needed to explain the very possibility” of the foregoing account of rationality (p. 189). Fundamentally, there are three “necessary conditions for theological philosophy”: transcendence, Trinity, and Incarnation. First, the existence of a single summum bonum that is not reducible to any of the finite goods we encounter in our experience is secured by divine transcendence in a classical sense alone (not its alternatives in pantheism, panentheism, polytheism, onto-theology, etc.). Here Schumacher invokes Aquinas’s teaching on divine simplicity (pp. 72–75). Second, the Trinity affirms “to the fullest possible extent God’s ability to express himself as the simple and indeed self-communicating God” (p. 80). Through a certain (Franciscan?) reading of the psychological analogy, and the necessity of the highest good being a self-communicating good, Schumacher argues that the Trinity discloses God’s ability to know, express, and will himself as the highest good. Third, the doctrine of the Incarnation reveals God as the Trinity and how “a rational life in accordance with the highest or common good is strictly speaking a life that involves imitating God’s Son by expressing the spirit received through his creative work to the glory of God the Father” (pp. 88–89). So construed, the Christian faith offers a “rationale for rationality”.

Schumacher proceeds to offer more detail about how faith in the Trinity revealed in Christ promotes the intellectually and morally virtuous life, which is, under the auspices of faith, synonymous with “life in God” (Theological Philosophy, p. 190). She devotes two chapters to what she calls “creedal reasoning” that seek to develop ways in which Christian doctrines promote the way of life revealed in Christ: we become what we are meant to be only by imitating the Son in expressing our “spirit” to the glory of the Father (it’s unclear what the parallel of “spirit” with “Spirit” does). Finally, the argument concludes in an account of how the theological virtues of faith, hope, and especially love solidify the intellectual and moral virtues to promote a “rational” existence (p. 163–85). Ultimately, this way of life is exemplified in the church as a community of love testifying to the reality of God in their midst.

There is much commendable and profitable in this work, but it prompted mixed reactions from this reader. Some of this owes to a discernable ambivalence in the text regarding its ambition and its moderation. Schumacher’s stated aim of offering a positive account of rationality without being “defensive” is fine as it goes, but something of a critical edge is missing without a searching assessment of the wider terrain. Resourcing the Thomist tradition to offer a solution to contemporary issues is welcome, but surely some engagement with the challenges to that tradition is necessary in a work that seeks “a full-scale re-configuration of philosophy” (Theological Philosophy, p. 2). These scruples aside, the first volume in particular offers a coherent and comprehensive account of a broadly Thomist construal of rationality’s and virtue’s mutual dependencies.

Another concern arises from the occasionally curious handling of doctrinal materials in the second volume’s discussion of “creedal reasoning” (chs. 4–5). Suffice to say, internal tensions—inconsistencies, even—threaten to undermine her accounts of suffering, human nature’s intrinsic goodness, and the reconciling purpose of the cross. Since it’s unclear whether this takes away from the work’s material claims vis-à-vis virtue and rationality, there is little need to dwell on these issues further.

More to the point of the author’s concerns, I would like to raise a question about the possible role of the aesthetic with reference to theological philosophy’s “necessary conditions.” Schumacher claims that the doctrine of the Trinity, as revealed in Christ, “fully enacts” the possibility of human rationality and is therefore its “arbiter” (Theological Philosophy, p. 191). No doubt, Schumacher shows ably how faith in the Trinity is conducive to the life of virtue, and thus to rationality. However, this falls short of identifying the Trinity as a necessary condition of human rationality. Perhaps I’ve missed something in all of this. To be fair, Schumacher offers many qualifiers: the Trinity is “seemingly” or “arguably necessary,” “provides an exceptionally profound explanation” for rationality, is “essential” to understanding the transcendent (pp. 192, 16, 95). Again: “there is a level on which an account of the reality of a single transcendent being necessitates an appeal to a Trinity of divine persons,” and “only in terms of God’s Trinitarian nature” may we say that God makes “himself known not only to himself but also outside himself, to us” (pp. 16, 74). One detects an almost transcendental argument for the doctrine in such statements. All the same, for Schumacher, the Trinity is a necessary condition of theological philosophy (p. 65). What are we to make of this?

Depending on which of these qualifications is normative, there may be two ways of reading the argument. On the one hand, the argument may get no further than setting forth a notion of the transcendent, self-diffusive good as the necessary arbiter of human rationality (Schumacher doesn’t establish that only trinitarian doctrine renders divine absoluteness and relativity self-consistent, though I think there is a way of making this argument). On the other hand, “necessity” might signal an implicit, albeit insufficiently clear, appeal to a principle of “fittingness.” It seems to me the latter is the most plausible way to invoke the Trinity in this argument. Fittingness is, after all, a kind of aesthetic necessity that nevertheless keeps the intelligibility of the Trinity outside the ambit of “necessary reasons” (cf. Aquinas, Summa Theologiae Ia.32.1.ad2). The author does locate her project within the context of a Christian culture, or “way of life”—oikonomia, one might say. And such contextualization is the prerequisite for discerning fittingness. However, absent any such appeal, I suspect Schumacher’s proposal would easily share more in common with “rationalist” exercises in “natural theology,” against which she positions her argument, than she admits or perhaps intends. I do not mean to suggest the proposal would fail on this account, only that its center of gravity would put it in orbit with projects that are not “necessarily” dependent on Christian distinctives. Schumacher’s critique of analytic philosophers of religion and “natural theologians” is that they fail to make good on their aim of “forging a natural and necessary connection between beliefs about the Christian God and the object of attempts to establish the rationality of theistic belief” (Rationality as Virtue, p. 5). In pursuing greater material correspondence between the conditions for rationality and the articles of faith, however, does Schumacher wish to forge such “natural and necessary” connections? She states that theological philosophy offers “a larger framework in which the connection between theistic proof and specifically Christian beliefs is integral,” where “proof” has a primarily moral, therapeutic, and pedagogical character (p. 5). But if this were Schumacher’s aim, to what extent would the resultant project avoid such “rationalism”? This is not to say that I share the author’s characterization of natural theology as inherently rationalist; both terms beg for nuance. I only wish to state the confusion, which might very well be entirely my own.

How far Schumacher’s proposed philosophy is “theological” therefore remains uncertain. Nevertheless, we may be grateful to Schumacher for posing the question and essaying an answer from which there is much to learn.