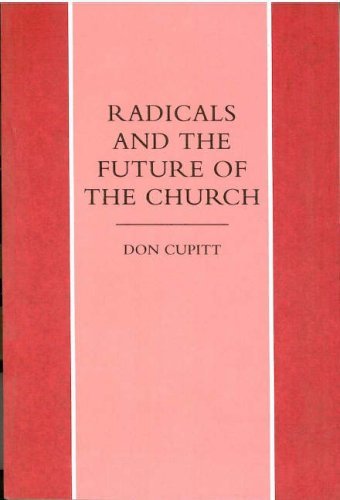 Radicals and the Future of the Church

The author describes this as ‘the last of a series of books about faith in the postmodern age’, the first of which was Life Lines (1986). Readers should follow three rules in reading this work. First, note that Don Cupitt uses the royal ‘we’. From the outset ‘we’, ‘our’, ‘us’ may in any given case mean ‘I’, ‘my’, ‘me’—in chapter titles as well as the text. Alternatively, the pronouns or possessive adjectives may be taken as they stand as long as they are taken to stand for a group of Cupittian radicals. Secondly, avoid the habit of asking: how on earth is that consistently Christian? with reference to the author’s commitments. He means what he says: ‘Your God has to be, let’s be blunt about it, your own personal and temporary improvization’ (p. 14). Don Cupitt may be sincere in his personal allegiance to Jesus but he explicitly rejects Christianity except in a form which you devise for yourself. Thirdly, do not think that connections between statements in the argument are often logical. Cupitt frequently associates things that sometimes go hand in hand rather than relating them logically. In principle that is fine as long as we remember it.

The book moves from a statement of the difficulties with Christianity through a description of an alternative Christianity to proposals for how radicals can function within a church. Traditionally, Christianity is fatally committed to realism: a belief in a real God out there, objectively independent of us. But this is just an excuse for all kinds of oppression, especially of women. Alternatively, Christianity is creative individual living, freely and aesthetically gliding through life’s decisions and serving the social needs of the neighbour. Art presents us with the paradigm for such an attitude—a position for which Cupitt, of course, claims no originality. The title of the book indicates its distinctive slant. The author argues that radicals should remain in the church ‘and attempt by deception, by reinterpretation, by political strategems and by perverting the minds of the young to do something for the transformation of Christianity and the future of religion’ (p. 125). (Only by reading the work can one judge how much irony, if any, there is in this statement. Don Cupitt should not be judged on the basis of a review more than the thinkers he discusses, e.g. Kierkegaard, should be judged on the basis of his own descriptions.) The point of weakness in the church which the radical might just exploit successfully is the contradiction between its external orthodoxy in belief and its practical formation of ethical decisions. This is ‘our Trojan horse’ and the author concludes with a brief sketch of reformed church life as he would like it to be.

The author writes with a nimbleness that makes protagonists seem flat-footed, so far as style goes. Furthermore, when Cupitt gets it right he is peerless. And at points he does. His remarks on evasive preaching, on the split between doctrine and ethics, on the media and reality are spot-on, illuminating and true observations. But observations they are. The contents of his proposal are tragically errant.

If the reviewer, who found the author condescending, to say the least, himself sounds condescending, I regret it. Doubtless Cupitt lives by his convictions better than I do by mine. This work should encourage us to revisit our convictions; serious orthodoxy should be prepared for self-correction and fresh appropriation of its beliefs wherever it is needed. But it should not be replaced by what is on offer here.