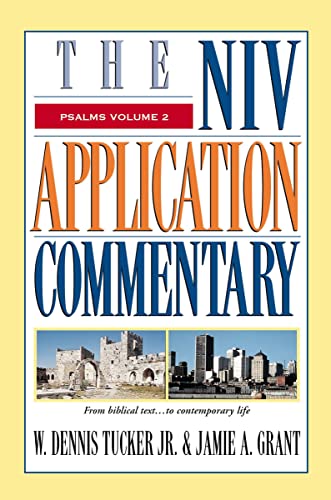 The NIV Application Commentary series is unique. Any student of the Psalms using this work will quickly find its accessibility a welcoming appetizer before being presented with the main course of world-class Psalms scholarship. This commentary is intentionally designed to be two-way—readers are not only guided backwards to what the text meant in its original contexts, but its meaning and implications are brought forward to bear on the readers’ present context.

In this volume, Grant covers Psalms 73–106, while Tucker covers Psalms 107–150. Individually, they have worked on the Psalms for many years. Besides bringing to the table up-to-date scholarship from both sides of the Atlantic, the combination of their strengths makes this second installation a formidable one. Tucker’s earlier work, Constructing and Deconstructing Power in Psalms 107–150 (Atlanta: SBL, 2014), supplied the historical basis for his interpretation of these psalms. Likewise, Grant’s published dissertation, The King as Exemplar: The Function of Deuteronomy’s Kingship Law in the Shaping of the Book of Psalms (Atlanta: SBL, 2004), supplied the literary and theological frameworks for his interpretation of the exilic and Mosaic psalms in books three and four of the Psalter. In other words, they are suitably qualified for this mammoth task.

Those familiar with the first volume by Gerald Wilson will be happy to know that Tucker and Grant, who represent a younger generation of Psalms scholarship, have continued the tradition. Even more so, they have now supplied in their introduction what was left unsaid by Wilson (pp. 19–37): two important hermeneutical perspectives—the editorial shape, and the theology of the Psalter. The discussions on the editorial shape of the Psalter have gone somewhat beyond what Wilson had accomplished. For instance, Grant has linked the loss of Jerusalem depicted in Psalm 74 all the way through Psalm 79 and beyond by highlighting certain motifs like “remembrance” (pp. 80, 97, 110, 140, 168, 182). Clearly, the commentary has benefited also from the slew of studies on the canonical shaping of the Psalter since the 1990s.

Even though the selling point of the commentary is its focus on “application,” its biting-edge, in my opinion, is the section on the “Bridging Contexts.” The methodology adopted by the commentary in every psalm is developed in three stages, namely, (1) Original Meaning, (2) Bridging Contexts, and (3) Contemporary Significance. In (1), the authors give sense to the text in its original literary and historical contexts. Brief discussions on structure, superscription, translations issues or poetics are given, though this is not dissimilar to what other commentaries have achieved. In (3), readers will find the application of the text in the modern or postmodern contexts, and at times, written in the first-person voice of the authors. However, in the section on “Bridging Contexts” (2), the authors try to make sense of each psalm intertextually; that is, the connections of the texts are made and interpreted under the larger theological rubric of not just the Psalter but also the Old Testament (e.g., discussion on the “horn,” p. 107). Moreover, relevant links between each psalm and the New Testament, if they occur, are explored and bridged.

Several other peculiarities of the commentary deserve mention. While the commentary is based on the NIV translation (2011), it does not restrict the authors from addressing translational difficulties (e.g., the translation of חֶסֶד as “love” in the NIV is discussed, pp. 881–82). Psalms superscriptions are given an interesting numbering throughout (e.g., Pss “78:0,” “138:0,” pp. 140, 905). The commentary uses transliteration of the Hebrew and avoids lengthy discussions on text-critical or form-critical issues, which are not uncommon in older Psalms commentaries. As a multi-author volume, the editors have also done a good job of preserving continuity without sacrificing individual voices of the authors. In my own reading, I have found Grant’s application (“Contemporary Significance”) more personal and helpful. Tucker, on the other hand, seems to give more expression to textual, poetic, and historical issues. They are somewhat even in their analyses of the editorial shape of the Psalms.

The strengths of this commentary are easy to list. It is easy to read and caters primarily to content, meaning, and application. In-depth issues (e.g., textual issues) or genre discussions are not absent altogether. The authors have tried to keep their comments concise without jettisoning important discussions on poetics or historicity (sometimes, expanded in the footnotes). As a whole, the comments are primarily semantic in thrust. As such, readers who are interested in the technical details may find it lacking. Consequently, this commentary is best used with others that forefront extended discussion on technicalities (e.g., Hossfeld and Zenger’s three-volume Hermeneia commentary) for those who need them. To be sure, the lack of emphases in technicalities does not mean they have not been considered; they are simply in the background. Comments on each psalm are divided into structural units that are, unfortunately, not always explained. I find that discussions on the editorial shape of the Psalter are mostly incremental, primarily semantic, and usually pertain to near-distant or adjacent psalms. In my view, the commentary has not decisively advanced the macrostructural understanding of the shape of the Psalter. To be fair, it was not intended to.

Nonetheless, this work is probably one of the latest commentaries available that incorporates the shape of the Psalter in its treatment—a trend that we will continue to see. In the last two decades, the adoption of this approach is clearly visible in several English commentaries on the Psalms, particularly the works of McCann (NIB, 1996), Hossfeld and Zenger (Hermeneia, 2005, 2011), deClaissé-Walford et al. (NICOT, 2014), and less so, Bullock (Teach the Text, 2015, 2017). Content-wise, Tucker and Grant’s volume reads most akin to the single-volume NICOT commentary. Length-wise, the complete NIVAC two-volume on the Psalms is similar to Goldingay’s three-volume Psalms, BCOTWP (Grand Rapids: Baker Academic, 2006–2008).

I think Tucker and Grant have succeeded with this NIVAC volume. It will be useful to those who minister on or off the pulpit, and will appeal to Bible study leaders, seminary students, and missionaries alike.