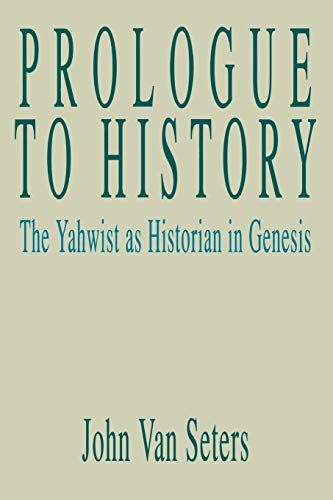 Prologue to History: The Yahwist as Historian in Genesis

The world of Pentateuchal criticism is dominated by Germanic scholarship, and Van Seters is one of the very rare American writers to have been taken seriously on the Continent. His Abraham in History and Tradition had a marked impact on Westermann’s great commentary on Genesis. In particular, Van Seters’ view that there is no separate E source in Genesis, but that J is the main author of Genesis, has been taken seriously by many including Westermann.

His earlier book focused on the Abraham story, i.e. Genesis 12–26. In this new work he extends his approach to the whole book of Genesis, which he argues was largely composed in the exile as a prologue to the deuteronomic history (Joshua to Judges). There were some small additions by P later.

Conservative readers will warm to the shrewd critique by Van Seters of the more complex theories of some source and redaction critics who find multiple layers of writing within a single paragraph or hang great hypotheses on slight verbal variation within the text, e.g. in 28:10–22; 29–30; 37–50. Van Seters does not dispense with the idea of source criticism, but generally favours a simpler, more common-sense approach to the issues. However he is far from embracing the final-form approach, whether it be Childs’ canonical criticism or the New Literary Criticism of Alter or Sternberg. Their chief works are conspicuously missing from his bibliography.

His very late date for J (sixth-century BC) is however less palatable to evangelicals as it implies that the stories of Genesis are essentially fictitious. He endeavours to prove this dating of Genesis in two ways, first by showing that Genesis 1–11 have similarities with early Greek historical writing, and second that Genesis’s depiction of the promises as unconditional is later than Deuteronomy’s conditional covenantal view. The last point, that Genesis’s view of the covenantal promises is fundamentally different from Deuteronomy’s, is dubious. But even if it were correct, we could not argue on this basis to the dating of the sources. The way ideas develop over time cannot be predicted and used to date texts; rather, when we have dated texts on other grounds, we can use these texts to trace the development of thought.

As far as Genesis 1–11 is concerned, Van Seters’ attempt to demonstrate its affinity with Greek historical works is distinctly weak. He tries to enhance his case by classifying Phoenician sources with Greek sources, which is dubious, since they are really part of the Ancient Orient which extended from Egypt to Babylon. But even with this fudging of the evidence Van Seters’ case is poor. Genesis’s account of origins is much closer to early second-millennium Mesopotamian sources than to late first-millennium Greek ones. These parallels do not show that the author of Genesis borrowed directly from Mesopotamian texts, but they do make it likely that he was writing much earlier than Van Seters suggests (for further discussion see G.J. Wenham, Genesis 1–15(1987), pp. xxxvii–xlv).