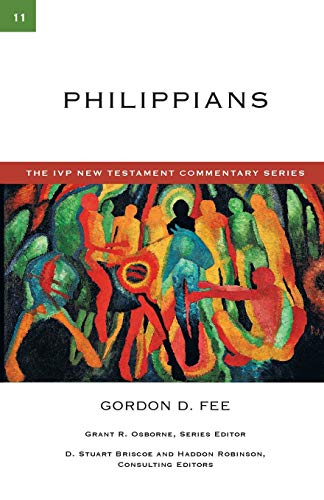 A new commentary by Professor Gordon Fee, one of the most widely respected of New Testament scholars, is always a cause for rejoicing. Fee displays a freshness of approach, an assured weighing of different opinions and an incisiveness in picking out the key issues, all combined with a warm, engaging style reminiscent of Paul’s in this letter. One might say that he is the ideal commentator for such a book.

Those familiar with Fee’s NIC commentary on Philippians will be interested in its relation to the present work. Fee acknowledges that in many ways the work is a smaller version of his previous commentary, but says he has ‘lightened up’ the exposition for readers of this series.

Fee begins by saying that though many love the book because of the warmly personal view of Paul it reflects, or for the wonderfully memorable passages it contains, actually very few readers can trace the flow of thought. This he helps us to do, interpreting the book as a ‘Christian hortatory letter of friendship’. While reciprocal friendship is at the heart of the letter (making it unique in this respect in the Pauline literature), Paul throughout presents himself as a model for the Philippians’ thinking and behaviour. At the same time Paul’s overarching concern is with the gospel: ‘it is Christ who is the centre and focus of everything. Paul’s and their friendship is predicated on their mutual participation/partnership in the gospel’ (21). The main theological concern of the letter, ‘God’s essential character on display in Christ, who redeems us to share that likeness’, Fee sees as underlining the other key themes: ‘suffering, joy, unity, pressing on toward the prize’ (36).

Fee accepts the traditional view that the letter was written in Rome between AD 60 and 62. As regards harpagmos in Philippians 2:6, he tends to the view that it should be exegeted as ‘something grasped for one’s own personal advantage’ (94). The phrase ‘emptied himself he regards as ‘metaphor, pure and simple’ (95). As for the ‘enemies of the cross’ in 3:18f., his verdict is that Paul is ‘probably describing some itinerants whose view of the faith allows them a great deal of undisciplined self-indulgence’ (164).

In a touching personal note, Fee shares frankly how Philippians 4:4–7 took on a new meaning when the news came that his wife had breast cancer. He was reminded afresh that God’s Word is not merely a source for scholarly study, but a message that addresses and comforts us in our deepest existential problems.

In summary, those who already have his NIC commentary will find little that is new here, but others will be well advised to beg, borrow, or purchase this accessible, engaging and scholarly exposition of one of Paul’s most beautiful letters. It will benefit your soul as well as satisfying your mind.