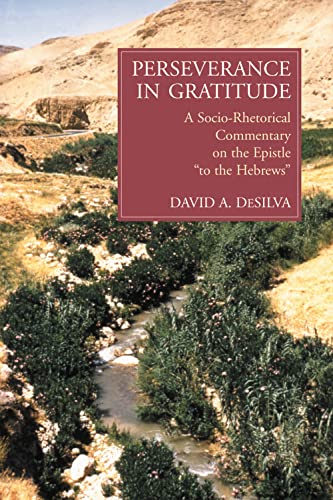 PERSEVERANCE IN GRATITUDE: A SOCIO-RHETORICAL COMMENTARY ON THE EPISTLE ‘TO THE HEBREWS’

This commentary is as much a study in exegetical methodology as it is of the interpretation of the letter to the Hebrews. In the preface, (the author, who is Professor of New Testament and Greek at Ashland Theological Seminary, Ohio), outlines his approach, built on the work of Vernon K. Bobbins, in which ‘the interpreter engages the text in detailed analysis, but he also engages the world that produced the text and on which the text seems to have had some kind of impact’ (xii). This means that a ‘socio-rhetorical’ commentary will pay attention to patterning within the text, comparisons with other texts which may be available, relations between the text and the worlds both of the author and the audience, stated goals to which the author is moving and religious dimensions which may have been influential in shaping the text into its current form. That is a large agenda, and the author acknowledges that application of each criterion to every pericope of a lengthy NT document is well nigh impossible. He also acknowledges that in the case of the letter ‘to the Hebrews’, data which would be helpful in other contexts (e.g. archaeological finds in Corinth or Ephesus) is singularly lacking.

While trying to avoid ‘exegetical generality’, deSilva is nonetheless forced to hedge his bets. The letter, he suggests, would be meaningful both for Jewish believers of the diaspora and for Gentile Christians (7), and for a Christian community composed of people from a variety of social backgrounds (9). He wishes to argue that the author is writing to a specific group of Christians known to him, but deSilva does not wish to limit the constituency to a particular house church. On the vexed question of authorship, deSilva is equally cautious. Pauline authorship is rejected outright as ‘probably the least likely solution’ (23), but deSilva makes no proposal for a most likely one. In an interesting discussion, however, he goes on to say that ‘while we lack a name for our author, we do not lack a personality’ (25); various clues within the body of the letter are harnessed and discussed. DeSilva goes on to discuss the author’s apocalyptic worldview, his use of the OT and his expertise in rhetoric (although the argument for a relationship between the rhetoric of Hebrews and the classical rhetorical schools of 5th century bc Athens is rather strained: when in 13:22 the author says that he is writing a ‘word of encouragement’, it is not altogether helpful to try to relate this to classical oratorical forms).

All of this, however, shows a concern to reckon seriously with the text of Hebrews within the sociological context of first century Christianity. I could not help wondering, at points, whether this context in fact influenced the commentary even more than the text itself. For example, discussion of the Son’s being seated at the right hand of God (1:3) is influenced more by the sociology of the Roman imperial court than by comparison with other Scriptures. Similarly, deSilva’s interpretation of Christ as priest (5:1ff.) is taken against the first century background of patron-client relations (186).

While the methodology may be overdone at points, the commentary does yield some important insights. In particular, the repetition of a ‘Bridging the Horizons’ section seeks to contemporise the message of Hebrews for the current church and for discipleship in the modern world. These sections prevent this commentary from being merely an academic treatise, and draw out useful lessons and principles for the church today.