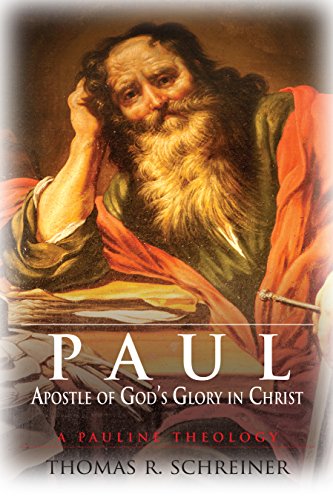 PAUL: APOSTLE OF GOD’S GLORY IN CHRIST. A PAULINE THEOLOGY

Schreiner employs the rationalistic logic of a Calvinistic theological synthesis to set forth and defend, in a readable and non-technical way, his understanding of Paul’s theology. Paul is portrayed as a missionary apostle, passionately committed to giving glory to God in Christ and to establishing churches in geographical regions where the gospel had not previously been proclaimed. Schreiner convincingly shows how Paul’s sufferings are vital to the spread of the gospel. Extended exegesis of numerous passages results in helpful treatments of, to mention a few, the centre of Paul’s thought, baptism, church leadership, and the relationship between the Holy Spirit and exhortation in Pauline ethics. Not unexpectedly, significant space is devoted to Paul and the law, but regrettably, his otherwise commendable treatment gets derailed when he speaks of ‘an implicit reduction of the law’ with respect to Sabbath, food laws, and circumcision. For had Paul grounded his views in such a rationale, it becomes easy to picture his Torah-observant contemporaries accusing him of holding to some sort of arbitrary, first-century convenience morality.

Methodologically, Schreiner rejects the idea that Paul’s theology can be explicated in terms of either Hellenism or Judaism, although in his treatment of anthropology this dichotomous attitude still raises its antiquated head. He shows that many aspects of Paul’s theology are best explicated in terms of a ‘both-and’ rather than ‘either-or’ approach. So, for example, the reason people sin is because they choose to sin and because they enter the world spiritually dead. Schreiner, who in this reviewer’s opinion could have pushed this procedure still further, makes no attempt to prioritise or integrate these ideas in ways that Paul himself did not endeavour to do.

Schreiner attributes all thirteen letters to Paul, treats the Book of Acts and Paul’s letters all of a piece, and rejects out of hand the idea that Paul’s own theology underwent any development over the course of a long missionary career. Further, little energy is expended to discuss alternative positions on various issues. This cannot be held out as a criticism since our author says he is interested in just giving his perspective. Such a decision, however, limits the book’s potential usefulness, for example, I as an introductory textbook in Pauline theology. He sketches his views and defends them exegetically, but—and this is unfortunate—sometimes a differing explanation is rejected simply because it is unimaginable that Paul could hold such a conception. These techniques have a way of obliterating any imagined rough edges in Paul’s thought and open Schreiner’s reconstructions to the charge that they have been ‘planed down to fit a prefabricated theory’.

Such assumptions and approaches also beg certain questions and problems. Even ifthe Pauline Theology Group of the Society of Biblical Literature (see their Pauline Theology in four volumes (1991–l997) might have gone too far one way in seeking to interpret each Pauline letter without recourse to other Pauline letters, they did so precisely to avoid the sort of flawed exegesis that comes to expression in Paul: Apostle of God’s Glory in Christ. For Schreiner’s method really amounts to treating the entire Corpus Paulinum as the immediate context for any single verse or expression under consideration. To illustrate: reading ‘our old person’ as ‘old Adam’ at Romans 6:6, because that is what it supposedly means at Colossians 3:9 and Ephesians 4:22, results in an altogether different interpretation from what the exegete will arrive at from reading Romans 6 on its own terms. On its own, ‘our old person’ is the person who died with Christ in baptism (6:2–5, 7). This death (6:6a) resulted in the person no longer serving that ‘old Adam’ (‘sin’ of 6:6c).

In sum, if all the reader wants is Schreiner’s views on Paul’s theological convictions, she or he will not be disappointed.