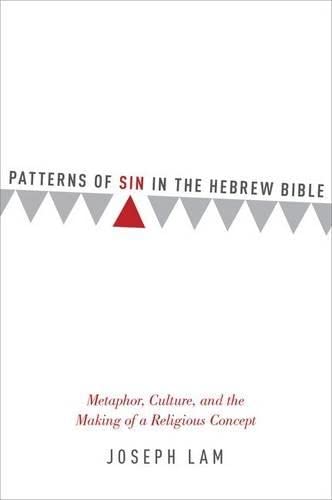 Patterns of Sin in the Hebrew Bible: Metaphor, Culture, and the Making of a Religious Concept

Joseph Lam serves as Assistant Professor of Religious Studies at the University of North Carolina at Chapel Hill. This book, a revised version of his University of Chicago Ph.D. dissertation, “examines the ancient Israelite concept of sin through the most pervasive metaphors used to express the notion in the Hebrew Bible” (p. ix), namely “sin as a ‘burden’ carried by the sinner … ; sin as an ‘account’ of deeds that is kept by God; sin as a ‘path’ or ‘direction’ in which one travels; and sin as a ‘stain’ or ‘impurity’ on the sinner” (p. xi). These are “conventionalized” metaphors which “point to aspects of shared understanding of the concept in the culture” (p. 5).

Chapter 1 outlines Lam’s understanding of metaphor as “a mode of construal” (p. 7) involving “ad hoc conceptualization” (p. 8). He rejects “strong” conceptual metaphor theories which see concepts as “entirely structured by means of metaphorical mappings” (p. 12). Rather, Lam suggests that “the systematic relatedness of conventionalized metaphors is the result of the routinized selection of structural features similar in the source and target. In other words, metaphors that are particularly ‘apt’ for describing the target concept have a tendency to be used over and over by speakers” (p. 13). This reuse can eventually lead the metaphorical sense to become “detached from the original literal sense,” producing a new lexical meaning (p. 8). Lam argues that עָוֺן (“iniquity”) and חַטּאָת (“sin”) in the Hebrew Bible represent such lexicalized senses, detached from the metaphors of “twistedness” and “falling short,” respectively, from which they perhaps arose (p. 9).

Chapter 2 explores the metaphor of sin as a burden, focusing especially on the use of נָשָׂא (“bear, lift up, take away”) in expressions such as נָשָׂא עָוֺן, which can mean either “bear iniquity” (i.e., guilt and/or punishment) or “forgive iniquity.” Baruch Schwartz sees these alternative meanings reflecting a single conceptual metaphor of sin as a weight which may either be “borne” by the sinner or “lifted off” by the wronged party (“‘Term’ or Metaphor: Biblical נשא עון / פשע / חטא” [in Hebrew], Tarbiz 63 [1994]: 149–71). In response, Lam argues that “various syntactic anomalies” and “highly idiomatic uses” point to “forgive” being a lexicalized and non-metaphorical sense of נָשָׂא, “dissociated from the spatial-physical meanings(s)” of the verb (p. 42). By contrast, he considers נָשָׂא in the alternative sense of “bearing” sin to be “higher on the continuum of metaphorical vitality,” and suggests that this usage arose later, influenced by Akkadian (p. 29).

Chapter 3 explores metaphors reflecting the idea of sin as an entry in a heavenly account. Lam points out that the language of God “repaying” (שִׁלֵּם) or “returning” (הֵשִׁיב) sin suggests that the metaphor of sin as a debt is older than Gary Anderson supposes (Sin: A History [New Haven: Yale University Press, 2009]). Crucially, however, God is usually the debtor, not the sinner, and repayment takes the form of retribution rather than compensation (p. 114). Lam also examines other words reflecting the idea that God keeps records of sin and repays it, including זָכַר (“remember”), מָחָה (“blot out”), and פָּקַד, which Lam understands as “reckon” (to an account), but also as having a lexicalized sense “punish.”

Chapters 4 and 5 are much shorter than the preceding two. Chapter 4 considers metaphors for sin as a path or direction, which Lam argues “represent clusters of distinct expressions that share the profile of spatial movement rather than a single overarching schema” (p. 158). Chapter 5 discusses sin as a stain and impurity, highlighting “the need for careful attention to the terms of the comparison—the tenor and vehicle—in the recognition, interpretation, and appreciation of metaphor” (p. 191). For example, the characterization of sin as “impurity” in some passages involves a metallurgical metaphor, while in others it is ritual impurity to which sin is likened (pp. 191–98).

Chapter 6 offers a brief conclusion, which is followed by a short appendix, substantial endnotes and bibliography, an index of primary sources, and a general index.

The book is wide-ranging and contains a wealth of insight and analysis. It is well written and presented, and although it will be most accessible to readers familiar with Hebrew, others will be able to follow the argument. Hebrew texts and other primary sources are given in transliteration with English translation. Highlights for this reviewer were the thoughtful and careful discussion of theoretical issues in chapter 1 and the thorough treatment of the account metaphor in chapter 3. Lam’s theological reflections flow from his exegesis rather than constraining it. He argues that the metaphors of sin as a burden and as a debt to be repaid by God reflect the view that God, not the sinner, must deal with sin (p. 100). He also notes that the metaphor of sin as a record in the divine accounts expresses divine justice and undermines Klaus Koch’s idea of the act-consequence connection as impersonal and automatic (pp. 125–27; cf. Koch, “Gibt es ein Vergeltungsdogma im Alten Testament?” ZTK 52 [1955]: 1–42).

Although many of Lam’s conclusions are compelling, some are not so persuasive. For example, since נָשָׂא has a range of literal meanings and is not used exclusively (or even predominantly) with heavy objects, Lam is perhaps too quick to assume that the sense “forgive” originated in the particular metaphor of a weight being lifted off the sinner, or that the sin carried away by the scapegoat was conceptualized as heavy (see p. 50). In general, however, his methodological caution is commendable.

In summary, this is a significant contribution which will repay careful study by anyone with interests in the concept of sin or metaphor theory in the Hebrew Bible.