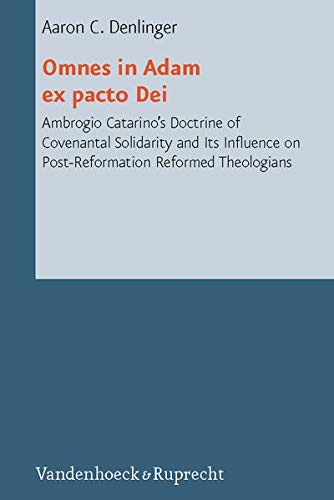 When one thinks of the hallmarks of the Reformed tradition, the doctrine of a pre-Fall covenant with Adam quickly springs to mind: a covenant established moral solidarity between Adam and his descendants, and transgressing that covenant rendered those descendants culpable for Adam’s transgression in the garden. The heirs of this tradition might well be surprised to learn that they owe an intellectual debt to a sixteenth-century Dominican named Ambrogio Catarino and shocked to learn that he developed his covenantal thought in defending, of all things, the Immaculate Conception of Mary.

In this fine study, Aaron Denlinger explores Catarino’s doctrine of covenantal solidarity in Adam and investigates the possibility of his influence on later generations of Reformed theologians. Catarino was forced to reflect on the doctrine of original sin in his defence of Mary’s immunity from Adam’s guilt. Catarino came to believe that humanity’s solidarity with Adam, and therefore participation in his guilt, had no realbasis such as biological descent or share in a common nature derived from him. Concupiscence was transmitted biologically, but this was, properly speaking, an effect of Adam’s sin rather than the sin itself. Participation in that sin and in Adam’s guilt was covenantal, dependent on the conditions of the prelapsarian covenant established between God and Adam. Only this, thought Catarino, could explain how Mary remained untainted. Though biologically descended from Adam she was, by God’s will, excluded from the covenant and therefore from the guilt of Adam’s sin.

This doctrine of covenantal solidarity was first mooted in relation to Mary in 1532, but Denlinger shows how Catarino went on to integrate it into his theology more broadly considered. The result was a covenantal theology of some sophistication. Catarino posited a unity in God’s purpose and in his dealings with his human creatures, even though the change in historical circumstances occasioned by the Fall dictated a change in the form of the covenant. The underlying unity was such that Catarino could reduce the diversity of God’s covenantal relationships with his creatures to one covenant according to God’s determination of their greater good. He also felt able to consider the various postlapsarian covenants under the rubric of one novus pactum. From this, Denlinger concludes that the unity of covenants was not an idea original to Reformed theology.

Denlinger moves on to consider possible pre-Reformation sources for Catarino’s doctrine, examining Gen 1:26; Hos 6:7; Sir 17:10 and passages in Jerome and Augustine to which Catarino appealed. He notes that while these may support the notion of a prelapsarian covenant they do not explain its function in Catarino’s thought as the basis of our solidarity with Adam. Nor can Catarino’s doctrine be explained by his legal background or by contemporary social contract theory. The parallels which have been suggested are simply not close enough. Denlinger finds a more promising avenue of inquiry in the covenantal causality of late medieval theologians such as William of Ockham. There were, according to Ockham, two ways of relating cause and effect. Effect could follow cause naturally, simply because of the nature of the things themselves. Or effect could follow cause, not on account of the nature of the things, but because this relationship was determined by the divine will, a will concretized in the form of a covenant. This idea of covenant causality had been applied in the areas of sacramental efficacy and the relationship between merit and reward. Catarino’s genius, argues Denlinger, lies in his application of the covenantal causality model to the doctrine of original sin.

This is a well-constructed study. The author is judicious in his handling of the evidence and has produced an important work which will be read with profit by students of Reformed covenantal theology and by those with an interest in the doctrine of sin, in Catarino himself, or in sixteenth-century Catholic thought. One of the most valuable features of the book is the well-organized review of the literature on the foedus operum, which would serve as a helpful orientation for those new to the subject. One might wish for a somewhat broader trawl through post-Reformation Reformed authors, but this is a minor quibble. Denlinger’s book is an original and significant contribution to the study of doctrinal development in the post-Reformation period and is to be commended.