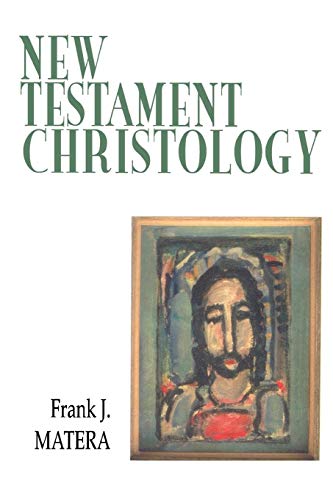 This title is carefully chosen: not ‘The Christology of the New Testament’, because Matera claims there is no one christology; rather this is a study of the christologies in the NT. So like many before him he works through the NT book by book explaining how each author presents Jesus.

If there is anything new in his approach it is his claim to focus on the stories of the NT, but I have to say that it was not obvious to me that this nod to current scholarly fashion made more than a terminological difference to the material or to the way it was presented. ‘Story’ is used not just of narratives: rather each author has his own ‘story’ to tell, so that for instance the ‘story’ of Hebrews can be set out in a single paragraph which is in fact a summary of the letter’s christology. I cannot see what the word ‘story’ has contributed, except perhaps to remind us that the NT portraits of Jesus are to be discerned as much in the narratives as in propositional statements. But that is something which I hope we knew well enough already.

The job is done well, if predictably. No one who already has a reasonable acquaintance with NT christology will find much that is new here, but the ground is covered clearly and sensibly for readers at the theological undergraduate level. There is little to object to, even if little to get excited about. In the gospels he works through the material in its narrative sequence rather than grouping material by theme, and so leaves the reader to do the work of constructing ‘a christology’ out of the raw data presented.

New Testament specialists will not be surprised to find that the traditional distinction between the ‘person’ and the ‘work’ of Christ proves impossible to maintain. Christology for Matera very properly includes soteriology, because the NT writers were concerned to help their readers to know Christ as Saviour, not just as an ontological enigma. When Matera finally attempts to sum up the NT’s claims about Jesus under five headings, it is instructive to discover that four of these are functional rather than ontological (Messiahship; significance for Israel and the nations; relationship to Church and the world; meaning for the human condition), leaving only ‘relationship with God’ to touch on the more traditional ontological questions. This seems to me a healthy recognition of the perspective of the NT witness to Jesus.