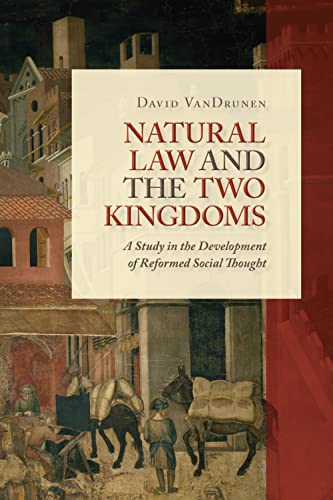 Natural Law and the Two Kingdoms: A Study in the Development of Reformed Social Thought

David VanDrunen, the Robert B. Strimple professor of Systematic Theology and Christian Ethics at Westminster Seminary California, offers us a thought-provoking treatment of a controversial subject with his Natural Law and the Two Kingdoms. Considering Christian engagement with culture has long been influenced by H. Richard Niebuhr’s Christ and Culture, which offers five paradigms to understand various Christian responses to culture. Niebuhr’s classic understands Calvinism to fall under the category of Christ transforming culture. VanDrunen joins others, such as D. A. Carson with his Christ and Culture Revisited, in showing the greater complexity of the picture.

There is no doubt that many within the Reformed community have understood the Christian task to be one of transformation of culture. Often the great Dutch polymath Abraham Kuyper is seen as the fountainhead of Calvinistic transformationalism. This would not be completely wrong. Kuyper’s remark from his “Sphere Sovereignty” address that “there is not a square inch in the whole domain of our human existence over which Christ, who is Sovereign over all, does not cry: ‘Mine!’” is well-known. However, VanDrunen argues in Natural Law and the Two Kingdoms that the Reformed tradition has not had a monolithic view of the relation of the Christian to culture. As an alternative to the Christ-transforming-culture paradigm, VanDrunen attempts to martial evidence that the Christ-and-culture-in-paradox paradigm may in fact be another option on these matters. VanDrunen successfully demonstrates that there has been an early and widespread Reformed understanding, acceptance, and use of natural law and two-kingdoms categories. However, even if we grant the widespread historical embrace of these two doctrines, there are normative questions that remain. Are the two doctrines biblical and theologically sound?

The book contains ten chapters and a conclusion that traces the development of the natural law tradition and the doctrine of the two kingdoms from its precursors in the early church through the Middle Ages and the Reformation up to the time of Reformed apologist Cornelius Van Til. VanDrunen begins by surveying the lay of the land in contemporary Reformed circles with regard to the natural law and two-kingdoms doctrines (pp. 1–21). Here the author notes the respect with which the Reformed tradition is generally held for its robust social thought. This social thought is often understood in terms of a comprehensive Christian world-and-life view. The call of the Christian is understood to be the purposeful attempt to transform all facets of culture. Additionally, the kingdom of God is understood in singular and all-embracing terms. VanDrunen offers this study to remind the Reformed and broader Christian community of a different view of how the Christian relates to culture formulated in the Reformation and the developing Reformed tradition.

It is helpful to remember that VanDrunen is dealing with two distinct yet intertwined doctrines. Both the natural law tradition and the two kingdoms doctrine find critics in Reformed circles (e.g., John Frame criticizes both doctrines in his Doctrine of the Christian Life [P&R, 2008], 943–56). Typically, criticisms of natural-law theory revolve around a concern that it is often formulated in an autonomous fashion detached from God and his special revelation. Additionally, natural law is understood to be a virtual wax nose since it is not codified and so there are as many varieties of natural-law theory as there are noses. The two-kingdoms doctrine appears to argue for a realm in which we can live, think, and have our being apart from God’s Word and a realm where his Word rules.

The author delves into the precursors of the Reformed tradition in the second chapter (pp. 21–66), which covers a broad range of historical development from the early church up to the time of the Reformation. The next three chapters unfold the reformulation of the natural-law tradition and two-kingdoms doctrines by John Calvin (pp. 67–118) and its further articulation by Reformed resistance writers (pp. 119–48) and the Reformed Scholastics in the age of orthodoxy (pp. 149–211). VanDrunen next considers natural law theory and a doctrine of the two kingdoms in Puritan New England and Anglican Virginia (pp. 212–75). Following what VanDrunen labels Kuyper’s “ambiguous” tradition, we find the erosion and rejection of the natural-law and two-kingdoms tradition. Chapter 8 considers Karl Barth’s thought (pp. 316–47), and chapter 9 considers the influence of Herman Dooyeweerd and North American Neo-Calvinism (pp. 348–85). Further consideration is given to the influence of Cornelius Van Til (pp. 386–422).

The Reformed community originally embraced natural-law and two-kingdoms doctrines. As the late nineteenth century waned and the early twentieth century dawned, that commitment faded into the background and was rejected by many in the Reformed community. Interestingly enough, a new appreciation for natural-law thinking and two-kingdoms doctrine has arisen within the Reformed world. And so the author concludes by considering this rebirth of interest in Reformed natural-law and two-kingdoms doctrines (pp. 423–34). VanDrunen grants that not all the details of how to apply these doctrines have been fully worked out. But if these doctrines are biblical, then further thought must be given to fleshing them out (the author has gone some way towards doing this himself in his recent book, Living in God’s Two Kingdoms: A Biblical Vision for Christianity and Culture [Crossway, 2010]).

David VanDrunen has offered his readers much theological food for thought. Whether one accepts or rejects a Reformed form of natural-law understanding (equated with the Decalogue) and the two kingdoms (think of the separation of church and state), it will not do simply to dismiss these doctrines. It seems clear that John Calvin and the Reformed tradition at large held to and further developed aspects of both natural-law theory and two-kingdoms doctrine, and appropriate forms of the doctrines can be formulated. However, the devil is in the details. Is it historically and theologically sound to group Augustine’s doctrine of the two cities with a two-kingdoms doctrine? For VanDrunen, for instance, a Christian is both a member of the spiritual and the common realms at the same time whereas for Augustine one was either a member of the civitas Dei or the civitas terrena but not both at the same time. It is quite likely that other examples from history could be multiplied. Does history support the current expressions of these doctrines? And the normative question remains: Are the doctrines as expressed by the author sound? To give one example: Is it true that Reformed theologians individually or as a tradition ever advanced the idea that there was ever a time when natural revelation (or natural law) functioned properly in a fallen world on its own? While the idea advanced by Geerhardus Vos and Cornelius Van Til that natural and special revelation have been correlative since creation has not been embraced by everyone within the Reformed community, the idea is sound and biblically defensible.

At the end of the day, accepting natural law and a two-kingdoms doctrine ought to rest on whether they are biblically and theologically sound. It is this reviewer’s position that appropriate forms of a two-kingdoms and natural-law doctrine can be formulated. VanDrunen has spoken to issues of great moment in the life of the church. Has he spoken the last word? That is not likely.