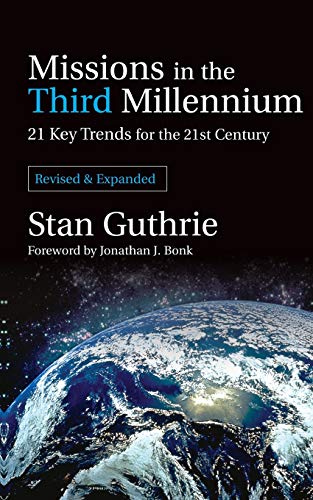 In 21 brief chapters, Guthrie introduces the reader to issues confronting world mission today. He is concerned that, within the mission movement, not all current trends are demonstrably biblical. On each subject he summarises different viewpoints before expressing his own. His conclusions are born out of serious Bible study and experience in mission. The book is important because, in missionary thinking, pragmatism often overrides principle and new trends command an unthinking following. Each chapter concludes with questions for thought or discussion.

The first six chapters examine questions facing sending churches. Many now bypass missionary agencies, doing their own thing. Many would rather support nationals than send missionaries. A missionary malaise within the churches adversely affects both the financing and sending of missionaries, while increasing demand is made for missionary care. Theologically, they drift towards an inclusivism that sees little need to evangelise the non-Christian world. And they become polarised over the role of women in ministry. In exploring these issues, Guthrie writes helpfully as someone committed to world mission who is positive about the role of agencies and yet realistic about their weaknesses. Occasionally, he does not do justice to the thoughts of those, like inclusivists and feminists, with whom he disagrees.

The second and most substantial section of the book deals with issues of mission strategy. He challenges the powerful marketing strategy of the 10/40 Window for its shallow thinking, and the AD 2000 Movement for approaching mission as a humanly manageable enterprise. His concern about anti-theological missiology means that he also rejects the pagan world-view unwittingly adopted by many in the Spiritual Warfare Movement.

On the practice of mission, short-term missions and projects are helpful, but cannot replace long-term commitment, living with the people, learning their language and culture. Contextualisation is vital but must be carefully biblical. He particularly criticises those advocating becoming a Muslim to reach Muslims. He calls for integrity in working in creative access nations: ‘The tentmaker better make, and sell, some tents.’ Holistic mission is crucial, but world evangelisation should remain the priority. However, he is not content with simplistic evangelism: he grapples with the theological shallowness of the church in many parts of the world, especially, but not only, amongst the 523 million charismatics.

Some readers will find Guthrie too cautious in his approach to partnership with nationals, contextualisation in evangelism and recent innovations in mission. What is important is his emphasis on career missionaries committed to making disciples, as is his ruthless critique of unbiblical trends that are too widely adopted. Although his bibliography is almost entirely American, he is not unwilling to learn from elsewhere. He quotes Alex Araujo, a Brazilian, with approval: ‘Westerners need, most of all, to get used to the idea that they are not the only ones who can do the job well’. Amen!

In the final section, he considers global culture, radical reactions to Christianity and issues of persecution and religious liberty. He warns against ungodly reactions: encouraging us to live distinctively in our post-modern culture, to build bridges to those of other faiths and to beware of resisting persecution with government power.

He concludes that the task of mission is long-term, for which we need a clear vision of God and commitment to serious biblical theology. The tragedy is that few theologians are seriously involved in the practice of world mission, and few missionaries are serious theologians.