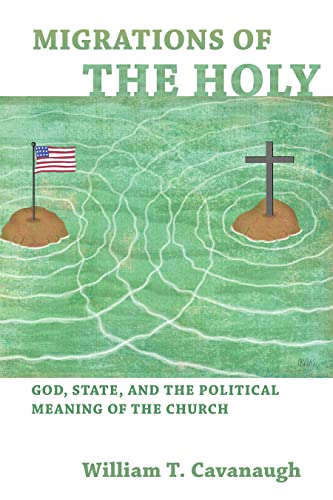 Migrations of the Holy: God, State, and the Political Meaning of the Church

To those familiar with the previous work of William Cavanaugh, Migrations of the Holy covers familiar territory. He picks apart the standard history of what Cavanaugh has taught us to call “the so-called wars of religion”; he offers compelling critiques of popular defenses of American church-state relations (Martin Marty, John Courtney Murray); and he highlights the political character of the church and its Eucharistic feast. He consistently calls readers back to first things with statements like: “Strictly speaking, the world is a theocracy: it is ruled by God” (p. 4). The overarching thesis is freshly stated yet classic Cavanaugh: Modern political order is not secular, but the product of a migration of the sacred from the church to the nation. Or, more simply: Not secularization but idolatry. In Cavanaugh’s view, the recent buzz about the global resurgence of public religion does not alter the fundamental landscape of contemporary politics, in which the political imagination of both secularists and Christians is “colonized” by the nation-state.

Cavanaugh employs his usual genealogical, sometimes etymological, method. Christian political thought, he argues, has too often taken “the State” as a natural given, and his corrective history probes the artifice involved in its formation in order to “unthink the inevitability of the nation-state” (p. 3). Following Charles Tilly and other historians, he rehearses the formation of the state as an apparatus of extraction (taxation and recruitment) for the purposes of war-making. Once the state was in place, rulers constructed and fused on the sacrificial rites and mystical mythology of “nation.” “Society” is likewise taken as a given, but Cavanaugh demonstrates that a unitary society emerges only when states demolish the sub-societies that constitute the patchwork quilt of the medieval world. In another chapter, he acknowledges that American exceptionalism is as old as America, but he adds the crucial point that contemporary civil religion has degenerated from its original Calvinist/Puritan form, which recognized that America, whatever its uniqueness, stands under judgment like any other nation. Elsewhere in the book, he points out that there is little empirical evidence that globalization dissolves the nation-state. To the contrary, globalization is the maximization of the nation-state.

His deep sense of the contingency of social order lends his analyses a clarifying cynicism. For instance: Why, he asks, doesn’t the U.S. solve its migrant worker problem? Cavanaugh argues that the liminal status of migrant workers is essential to the use we make of them. He demonstrates his accustomed sharp eye for illuminating detail. He illustrates the “complex space” of medieval society by pointing out that in premodern Europe a criminal would not be tried by the court of the territory where the crime was committed but in the court of the one to whom he was attached by feudal, or kin, or religious bonds (p. 9). He muses brilliantly on varieties of mobility and stability by examining the different aims of the tourist, the migrant, the pilgrim, and the monk (ch. 3).

To say that this book is familiar is not a criticism. Though I have read most of Cavanaugh’s books, he always impresses me again with his refusal to take myth for truth and his passion for empirical verification to cut through our illusions. He writes with bracing common sense, as when he returns again to his insistence that the church must assert its political authority directly through church discipline. I do not share Cavanaugh’s commitment to nonviolence, but the pacifism is muted here. The church must at least, he says, reassert its authority to tell Christians if and when they may kill, rather than ceding that authority to the nation-state. We do penance for the inquisition by refusing to fight in unjust wars using unjust means (p. 114). There is very little for a just war theorist to disagree with.

Migrations of the Holy exhibits what seems to be a trajectory in Cavanaugh’s work: Though remaining a specialist in political theology, his work has become more expansively theological. One does not normally think of going to Cavanaugh for insights into eschatology or Christology, but here he provides fresh insight into both. Realists commonly appeal to the “already/not yet” eschatology of the New Testament to support a “balanced” or tragic political theology, but Cavanaugh argues that there is no “countervailing principle” to the coming of the kingdom. The already has absolute “ontological priority”: “The already is what really is” (pp. 60, 62). Not only is this right, it is startlingly right, the ground for a refreshingly hopeful political outlook, for if history is the comedy of redemption then the principalities and powers that oppose God’s rule are fading, and in the end are nothing. His Christological account of the sinfulness and visibility of the church (ch. 8) works from von Balthasar’s meditations on the Pauline declaration that Christ was “made sin for us” (2 Cor. 5:21) to conclude that the church manifests itself as Christ’s visible body precisely in its honest and penitent cry for forgiveness.

Not least, Migrations of the Holy gives us much of the essential Cavanaugh in an affordable form and thus is well suited to the classroom, where it is sure to be a provocation in the best sense.