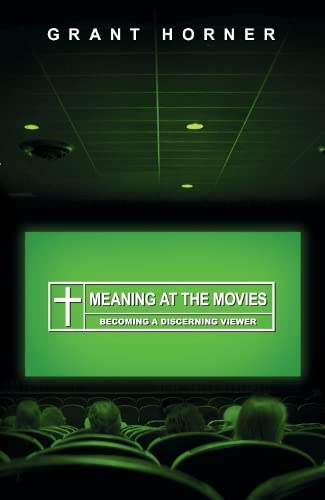 Meaning at the Movies: Becoming a Discerning Viewer

Written by Grant Horner Reviewed By Theodore A. Turnau III
Mission and Culture

What literature was one hundred years ago, cinema is now. Through film, worldviews flow to our minds in torrents. What is needed is discernment, and this is what Grant Horner’s guide to Hollywood’s art form promises.

The book presents a specifically theological perspective on the movies. Horner has a high view of Scripture and often alludes to biblical passages, especially Rom 1 and Ecclesiastes. These passages set the tone for the whole book. In the introduction, Horner presents his theological presuppositions regarding culture, specifically film: human beings know God but suppress this truth (Rom 1:18ff.); culture flows precisely from this suppression, from a doomed quest for meaning after the Fall (Ecclesiastes); nonetheless, truth returns and haunts us. Films, then, are philosophies in story form that attempt to keep God at a distance even as they gesture toward that suppressed truth.

Part I (chs. 1–3) concerns methodology, a framework for engaging filmic worldviews. Chapter 1 presents his method for watching movies with biblical-critical discernment, namely, ferreting out the philosophy/worldview perspective that motivates the story (he elides the categories of “philosophy” and “worldview” throughout). Chapter 2 presents the possible worldviews that viewers should look for. In essence, it summarizes James Sire’s famous The Universe Next Door. As someone who teaches a course on comparative worldviews, I was disappointed to see Romanticism completely ignored. Chapter 3 explores categories that can be used to interrogate a film: what the film says about humanity, its plot, tone, whether reality in the film tends towards determinism or chaos, optimism or pessimism, and so on.

In Part II (chs. 4–8), Horner analyzes film genres. He teaches literature and film, and it shows in his sensitivity to the forms, styles, and themes unique to each genre. He devotes a chapter each to comedy, horror, romance, noir, and what might be called “memory films,” to which he attaches a special theological importance, since his reading of Rom 1:18ff. involves specifically the suppression of memory (ch. 8). Using plenty of analyses of specific films, he follows each genre into a theological theme, certain truths about humanity as God’s creatures that are suppressed, but which inevitably make their return. Sometimes, this results in profound and surprising insights, such as his reading of the “pleasurable fear” that motivates horror films as a control mechanism for keeping a deeper fear of God at bay (pp. 126–32) or the tracing back of noir’s femme fatale to certain patriarchal interpretations of Eve (that is, the femme fatale as a very male way of dodging our culpability before God) (pp. 171–73). However, sometimes his readings of these genres seem heavy-handed. Are we to believe that comedy is nothing but a reaction to the despair of existence in a world darkened by post-fall absurdity (pp. 115–19)? Or that noir tells the truth because of its cynicism about man, even as it betrays the biblical injunction to love as Christ loved us (ch.7)? All of this is to say: Horner is obviously a movie buff who knows his stuff, but his marriage of movies with theology produces mixed results: flashes of insight at times, forced interpretations at others.

Part of the blame for these mixed results lies with his theology of culture. All human culture is a mixture of light and darkness; but for Horner, the center of gravity is on the darkness. He defines culture as a result of the Fall. Culture is what happens when we humans gave God his walking papers and found ourselves trapped. Culture is “our futile attempts to understand the world,” especially its meaningless and approaching death (p. 39). Our cultural efforts are doubly doomed because we suppress the truth we have, desperately wanting to forget (and to forget that we’ve forgotten) the existence of a God to whom we owe allegiance (Rom 1:18ff., see pp. 42–47). One gets the feeling that once the Lord returns, culture will become obsolete, along with despair and meaninglessness. But isn’t culture more than a response to the Fall? In tending the Garden, weren’t Adam and Eve doing culture as a response to the structures of creation? Mystery arises not only from meaninglessness, but also from beauty and subtlety built by God into creation itself. Solomon hints in this direction when he says, “It is the glory of God to conceal a matter; to search out a matter is the glory of kings” (Prov 25:2).

That is to say, common grace, God’s generous sharing of truth and beauty, needs to be as much a part of our cultural analytical vocabulary as idolatry, distortion, and suppression of truth. Horner comes close to common grace in his “conservation of truth” principle, modeled after the conservation of mass in physics (pp. 45–46). He explains the principle this way: In culture humans suppress the truth in unrighteousness (à la Rom 1), desperately trying to forget God, but truth always returns as it must (pp. 42–47)—it is part of the cosmic equation. So while movies twist and suppress the knowledge of God, truth always returns to haunt the story, almost automatically (or better, symptomatically, like a psychological complex). Movies are occasions for groping in the dark while shying from a light they cannot escape. Fair enough. But missing from this theological portrait of culture is the God who himself reaches out to rebels through common grace. Paul tells the Lystrans in Acts 14:17 that God leaves signs of his presence as he “fills your hearts with joy.” Horner’s “conservation of truth” principle obscures the generosity and closeness of God to those who rebel against him that Paul refers to in Acts 17:28. We fairly breathe the presence of God all the time. If that is true, film (and culture) is more than a suppression of truth and memory haunted by the knowledge of God that makes a return. Film is a wrestling and engagement with God himself as he makes himself known through his many powerful gifts. Such a sensibility comes through better in books like Roy Anker’s Catching Light: Looking for God in the Movies (Eerdmans, 2004). Even in movies like the Star Wars saga, Anker’s interpretation suggests the grace of God everywhere, cropping up in the unlikeliest of places. By contrast, in many of Horner’s analyses, it feels as if God were in a galaxy far, far away.

Of course, this is a question of balance, like theology itself. An overemphasis on common grace can lead to spiritual naiveté, blindness to idolatry and truth-suppression. Horner is right to urge caution. And to be fair, he does sometimes mention grace in filmic moments, such as the joy of finding love unlooked for in romantic comedies (ch. 6). But more often the emphasis falls on truth-suppression in a world that has abandoned God. The thing to remember is: God has by no means abandoned us in our cultural struggles—not even at the movies.