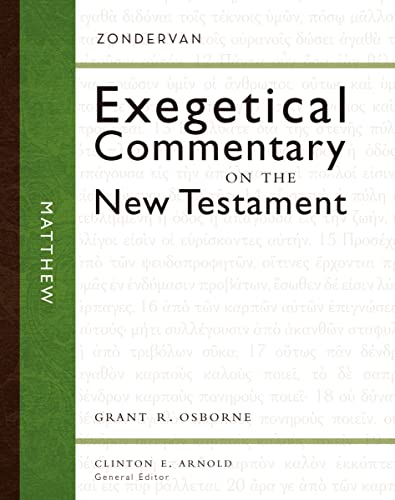 It is much more difficult to write a review of a biblical commentary than it is to do so for a monograph. With a monograph one can assess the thesis of the book as successfully prosecuted or not: Are the arguments clear and well-researched, and do they take into account relevant considerations? But a commentary on Holy Scripture is a different beast. There is no singular thesis, and it is impossible for any author to interact with and evaluate all the secondary literature on even one passage of Scripture, let alone the whole of a book. A commentary certainly can be judged as clearly written and researched or not, but even this evaluation is somewhat dependent on the purpose and type of commentary: Where does it lie on the spectrum of popular to critical-academic?

Nonetheless, when a new commentary appears, especially one written by a seasoned scholar and in a new series, it is beneficial for us to provide some orientation to the work and evaluate its relative value and usefulness. Such is the case with Grant Osborne’s recent weighty commentary on Matthew, one of the early volumes in a new series called the Zondervan Exegetical Commentary on the New Testament. Osborne has been teaching NT at the seminary-level for nearly forty years while he has also been heavily involved in church-ministry. This not only qualifies him to capably handle a text so important as the First Gospel, but it also demands that we as readers listen with humility and expectation to what he has to say. Likewise, the editors and the contributors of this series comprise a virtual “who’s who” of contemporary, mature American evangelical scholarship, and this causes us to take note.

In terms of evaluating the series overall, it posits itself as part of the tradition of confessional commentary on Scripture with an eye toward the pastor especially. It also sees itself as a series that makes some unique contributions to the commentary genre. Particularly, this series stands apart in that for each passage the commentator provides a clear, succinct, and demarcated “main idea” of the passage. This is then followed by a detailed “exegetical outline” that includes a chart with a simple discourse-analysis type of outline of the passage, complete with indented clauses and tags that indicate the relationship of clauses to each other. Anyone familiar with the various tools for discourse analysis available (such as “arcing,” “tracing,” “thought flow diagrams,” etc.) will recognize this kind of work and also that this is unique to the commentary genre. This is followed by the more normal verse-by-verse commentary on the text and some ventures into the “Theology in Application” of the passage. Overall the series appears to be scholarly in its research while pastoral in its orientation. These commentaries are written for the pastor and teacher who has had some level of Greek training, but with no expectation that this person is an expert or is interested in all the scholarly details and debates. This is wise and I think does aim appropriately at a large readership, including many readers of this journal. The editorial philosophy and aims of this series are evidently well thought-out, and if the Osborne volume is any indication, this series will indeed be of great benefit to the pastor and teacher of Holy Scripture.

Turning to Osborne’s work in particular, the voice and level of discussion is very accessible and serviceable for its pastoral aims. Osborne personally testifies to his desire for the format and style of the commentary to be such that it will help pastors rediscover the centrality of the Bible in their ministries (p. 13). In most cases he successfully accomplishes this admirable goal. While not being a commentary that focuses on the academic debates, Osborne does regularly provide notes that clarify which contemporary scholars hold certain views under discussion. His verse-by-verse comments are succinct and helpful. The layout of the commentary is also quite handy with clear and large headings that walk the reader through aspects of the text, including its place in the overall literary outline of the book, its main idea, its translation broken down via a phrase-by-phrase discourse analysis, followed by easily findable and succinct verse-by-verse comments. The “Theology in Application” piece at the end of each section has clear, numbered points and explanations that can easily be accessed and digested. Overall, the pastor who makes this one of the main commentaries in sermon preparation will not be disappointed, and in this it seems Osborne’s volume accomplishes its goal.

At the same time, in terms of evaluating this commentary relative to other ones, I may offer a few critiques and raise a few concerns. First, overall the academic engagement strikes me as a bit dated, or I should say, limited. This is certainly not to say that either new or very old is always better, but simply to note that in some instances the research behind the commentary could have benefitted from both more recent and more ancient approaches and insights. This is apparent in the first instance by observing that most of the footnoted references date from the 80’s and 90’s, and much in the bibliography from the 1970’s. Again, this is not necessarily a bad thing and in part reflects Osborne’s and our own situatedness. Nevertheless, this aspect is noticeable both in its lack of contemporary work and especially in its almost total neglect of any commentaries or homilies from the pre-modern period. This chronological short-sightedness is not atypical of the modern commentary, but it is lamentable nonetheless. This is especially true now when there is a groundswell of renewed appreciation of and accessibility to pre-modern Christian readings of Scripture. It seems to me that any commentary that seeks to serve and guide the pastor and teacher would ignore the great tradition of devotional preaching and commentary only to its own neglect. Ideally this is not an either-or between pre-modern and academic readings, but when push comes to shove and space is limited, it seems today’s pastor would likely benefit more from hearing from Augustine, one of the Gregory’s, or even Maldonatus than Betz, Casey, and what is on offer in JBL. But we mustn’t be too harsh or unfair. Osborne is balanced, sagacious, and pastorally oriented. But great treasures await us if we will begin to read more widely than modern academic works on Matthew.

This constrained range of resources and datedness also manifests itself in Osborne’s introduction. For example, while his method for interpreting the Gospels has much to commend it (pp. 21–27), in my opinion there is still far too much weight placed on the value of a Gospel-comparing, redaction-critical approach (all the rage in the 70’s). Likewise, his discussion of the relationship of history and theology and Matthew’s historical trustworthiness (pp. 27–30) misses what is now a further and very important step beyond that represented by the Third Quest (which Osborne describes as “1985 to the present”): work in epistemology and historiography in recent years has precipitated yet another valuable approach that gets beyond the history-theology impasse that the Third Quest and “critical realism” remains mired in, particularly with the idea of Testimony.

Moving beyond this concern about datedness, I may also raise a couple of questions about the way the commentary functions. First, regarding the discourse analysis aspect of the commentary, I sometimes wonder how effective this element is. I do see great value in reading the story closely and intensively, and such a tool helps toward this end; it is much better than what I call the typical WSM (“whatever strikes me”) approach to narrative. But in looking over the discourse charts of each passage, it is not immediately apparent to me how much these provide in analyzing the text or offering much insight, especially when applied to narrative. (I think there is inherently more value in this kind of analysis with didactic literature.) This kind of analytic work does provide the opportunity to get one’s hands dirty with the text, and this is very valuable. But it doesn’t seem to necessarily lead to a more astute and thickly theological reading of the text. This manifests itself in the actual commentary in that it is difficult to see how the graphical discourse analysis of the passage actually has much or any effect on what is said in the commentary. That is, would the “Explanation of the Text” and “Theology in Application” sections be any different or lacking if the discourse analysis were absent? It seems not as far as I can tell. This is a question that will need to be asked of each volume in the series.

A second question to be raised is how theological the “Theology in Application” sections really are. That is, in terms of being actually theological comments or applications of the text, they seem a bit thin and not greatly connected to a robust intra-canonical, orthodox, or biblical theology of Scripture. Rather, they are more akin to “main points” of the passage or “things to highlight in a message” than actual theological reflections. For example, are such typical statements as those on 4:23–25 really best described as “Theology in Action”: “An itinerant preacher and minister,” “Jesus’ incalculable power,” “Great excitement,” and “Jesus’ miraculous works transferred to the disciples”? Some maybe; others not. There is great benefit in such succinct observations drawn from the passage. Nevertheless, in terms of pushing the reader (and thereby the preacher) to greater theological reflection and application, it seems to fall a bit short.

We must not end on a negative note, however, lest I give the wrong impression. The shortcomings articulated above are not deal-breakers and are not specific to this commentary only, though they should be noted in evaluating the work at hand. Professor Osborne’s commentary is a notable achievement and will indeed serve its educated-pastoral purpose well in many ways. I would recommend it as one to have on any pastor’s shelf as they go to study and proclaim the Gospel from the First Gospel.