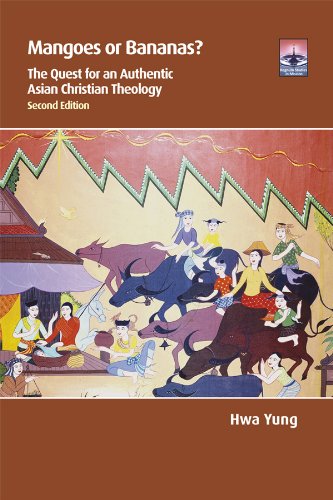 Mangoes or Bananas? The Quest for an Authentic Asian Christian Theology

It is painful but salutary to read this Malaysian Chinese scholar’s analysis of Western academic theology. Hwa believes that western dualism and enlightenment thought have produced theologies that are largely, though not completely, irrelevant to the mission of the church in Asia, and probably elsewhere. Having explored the effect of western theology on theories of mission that have been influential this century, he proposes four criteria for a missiological theology. These are, first to address the sociopolitical context of the church; secondly to empower the church in its evangelistic and pastoral task, redressing the western blindspot regarding the supernatural; thirdly to address the problem of inculturation, writing into the appropriate world-view, taking account of indigenous learning patterns and living styles; and fourthly to be faithful to the Christian tradition of truth, which Hwa normally locates in the Scriptures. Although his exploration is applied primarily to the Asian scene, his categories are a helpful grid for preparing theological teaching for western as well as Asian cultures. If more western theologians were able to put these issues at the top of their agenda, their work would greatly increase in value to the church at large.

Hwa’s consideration of contextualization challenges both those who want to modify the biblical message to accommodate a target culture or to conform to a pluralist agenda, as well as those who naively assume that the same pattern of teaching is appropriate for anywhere in the world. The gospel must be incarnated into Asian soil without losing its distinctives’ (121). We are a pilgrim church, called in some ways to grow distinctively different from our surrounding culture while being culturally relevant in what we say and do. In practice this is easier said than done. For example, some will be surprised that Hwa defends Paul Cho Yong-gi’s authoritarian leadership style and prosperity gospel as appropriately Asian and arguably biblical. Other Korean theologians have argued against that, stressing the need of servant leadership and a theology of suffering. However, differences of opinion should not divert us from the urgent task of seeking to attain both contextual relevance and biblical integrity.

The second part of the book analyses the work of a variety of Asian theologians both before and after colonialism. These include Matteo Ricci, Nehemiah Goreh, Sadhu Sundar Singh, Toyohiko Kagawa and others from the earlier period; D.T. Niles, M.M. Thomas, Kosuke Koyama, C.S. Song and the Korean Minjung Theology from the post-war ecumenical movement; and Vinay Samuel, Cho Yong-gi and the Asian Theological Association’s work as examples of contemporary evangelical thinking. Hwa highlights significant contributions in most of them, but find that all fail to meet his criteria in some respect. A significant number whose work is considered are not primarily academic theologians. Hwa makes no apology for including those whose thinking was born of passionate involvement in the church’s mission, especially as they have had such significant Influence on Asian Christian thought and practice.

Hwa’s title (Mangoes or Bananas?) expresses his concern that much Asian theological thinking is, like a banana, white on the inside. He longs for a mango theology for Asia, yellow throughout! His agenda includes an Asian Christian hermeneutic, Christian apologetics that engage with Asian religions, systematic theology that relates to Asian realities, and work on personal and social ethics. And he wants it all to be communicated at grass roots level. This call to a new agenda for theological research should be weighed carefully by all engaged in such work.