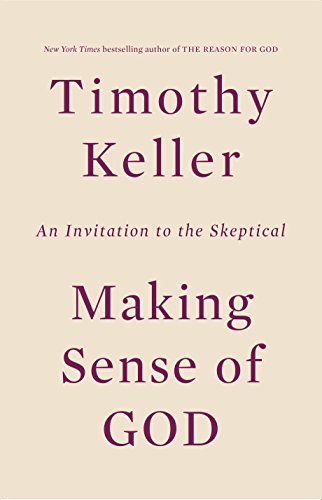 Tim Keller’s 2008 New York Times bestseller, The Reason for God: Belief in an Age of Skepticism (New York: Dutton), first propelled him into the international spotlight. The Reason for God sought to make skeptics “doubt their doubts” about Christianity by holding them up to the same intellectual scrutiny to which skeptics held Christianity.

While The Reason for God impacted many interested in Christianity, Keller realized it was not written for those who do not deem Christianity “relevant enough to be worth their while” (p. 4). Such people would never pick it up but rather dismiss Christianity altogether as a “blind faith in an age of science, reason, and technology” or believing “fewer and fewer people will feel the need for religion and it will die out” (p. 4). Keller’s newest book, Making Sense of God: An Invitation to the Skeptical, is directed at those people, serving as a prequel to The Reason for God.

Keller’s main purpose for both books is to explain how Christianity makes sense emotionally, culturally, and rationally. Naturally, The Reason for God discussed the rational, while Making Sense of God focuses on the emotional and cultural, making the case for Christianity’s relevance in both spheres.

Making Sense of God addresses skeptics’ objections to faith by attempting to create a true secular “safe space” for those exploring faith and ideas. Keller argues that such space is needed since there is no “truly secular state” in which all beliefs and ideas can be presented in mutual respect and peace (p. 3). Keller frames this safe space:

Making Sense of God is divided into three parts. Part 1 (“Why Does Anyone Need Religion”) exposes the erroneous impression that secularism and human advancement are swallowing up religion. Keller argues that secularism and religion are both founded on faith. Part 2 (“Religion Is More Than You Think It Is”) tests both skepticism and faith by examining their significance for our meaning in life, satisfaction from life, individuality, finding one’s true self, hope, morality, and justice—issues of profound importance for every person, regardless of worldview. Part 3 (“Christianity Makes Sense”) does what one would expect: make the case for Christianity by first testing the reasonableness for belief in God and then belief in Christianity.

Keller doesn’t typically explain the flaws of secularism and skepticism through use of Scripture but rather interacts with sources from a variety of fields. He cites scientists, secularist thinkers, philosophers, artists, and musicians. I appreciate Keller’s generosity and humility in both seeking and describing truth. This generosity drove me to a deeper understanding of the nature of his critique. One example of this is his willingness to interact with Nietzsche, agree with true claims, and use Nietzsche’s argument for Christianity. Keller also explains how many non-religious people are often more moral and kind than religious people because it is the immoral and broken people who often feel the need of religion more than those who consider themselves “good.”

Many features of Keller’s writing make it easy to see why he is a bestselling author, including clarity of argument, deep knowledge of the secular belief systems, a smattering of powerful illustrations and quotations, and a compelling presentation of the God who provides realistic and compelling answers to life’s issues. Keller’s writing both feeds the intellect and stirs the soul. While his interactions with influential works by agnostics and skeptics may prove long and cerebral for pedestrian readers, Making Sense of God and its nearly sixty pages of endnotes and bibliography will serve as an invaluable starting point for others desiring to delve into a Christian apologetic response to secular thought.

I pray many skeptics take Keller’s invitation and enter the secular safe space he seeks to create. Readers will be helped by honestly thinking through Keller’s analysis of secular worldviews, which can’t explain the existence of values like courage and love, why we need morals, the basis for morality, and how secularism’s pursuit of true satisfaction often breaks under the weight of suffering.

Skeptics who honestly engage with this book might find themselves like the skeptics and converts to Christianity who are mentioned in this book and thanked Keller for exposing flawed presuppositions and sharpening their grasp on reality.

Like its predecessor, this book is a must read for believers who want to communicate the faith and live faithfully in a secular age. Readers will know how to engage skeptics better by understanding the thought processes that drive their beliefs and decisions. If they are like me, many people will also be convicted and discouraged to see how our secular culture has influenced us all.

Most important of all, Keller’s work will make readers more confident that the God of Christianity is not only relevant for today but the only One that makes broken humans whole and human existence understandable in this crazy world. While the title Making Sense of God may be a misnomer, it proves a helpful tool in showing that the God of the Bible is not only possible, but profoundly compelling to a secular world.