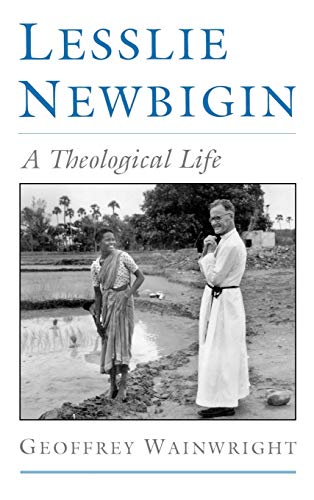 These two substantial volumes are an indication of the continuing, considerable impact of the life and work of the late Lesslie Newbigin. Geoffrey Wainwright’s work consists of a profound and generally sympathetic exposition of Newbigin’s theology that deals at considerable length with his missiology, ecclesiology, apologetics, and so on. By contrast, the second volume contains papers delivered at a conference held in Birmingham in 1998 to honour Newbigin by, so say the editors, exploring his ideas critically. This book therefore contains material that responds to Lesslie Newbigin’s thought, sometimes to the point of complete disagreement with him. Clearly, some of the participants at this conference were people who were themselves ‘scandalised’ by his work.

Geoffrey Wainwright knew the man about whom he writes over many years and his extraordinarily detailed study of Newbigin’s theology is clearly a labour of love. It is significant that our attention is drawn first to Newbigin as ‘A Man in christ’ and a ‘Confident Believer’ because, as the book demonstrates, his theology was inseparable from his experience of the grace of God and the fundamental convictions which resulted from this experience concerning the truth of the gospel. As to the former, while at an SCM camp in South Wales in 1929 Newbigin had ‘a vision of the Cross’ which, while he was loathe to discuss it, was clearly the turning point of his life. With regard to the latter, he discovered James Denney’s Romans during his studies in Cambridge and said that it delivered him from theological liberalism to ‘a lifelong belief in the objective atonement wrought by Christ on the Cross’.

This statement highlights for me the biggest surprise discovered through the reading of Wainwright’s study, namely, Newbigin’s complete and utterly consistent orthodoxy. Like many others, I have read almost everything that Lesslie published and have been profoundly grateful for his clear, courageous, and often highly original, missiological insights. However, in the back of my mind the suspicion lingered that books bearing the initials WCC remained suspect because, surely, nothing this good could come out of modern Geneva! Yet Wainwright’s book shows how, from the time of conversion to the very end of his life, Newbigin remained completely committed to the gospel. As a student in Cambridge he wrote: ‘God’s purpose for man is made known not by the upreach of human moral and intellectual striving, but by the downreach of God’s saving grace’. At the same time in one of his last writings we find him insisting upon the human need for ‘redemption and forgiveness’ and stating that the death of Christ demonstrates the fact ‘that the human race has turned its back upon its Creator’.

What is more, Newbigin maintained this orthodox theology within the ecumenical arena where he acted as a gifted, passionate and extremely able apologist for the evangelical faith. Of course, it was precisely this ecumenical engagement which gave rise to the kind of suspicions to which reference has just been made and I suspect that Lesslie Newbigin’s work as an ecumenist prevented many of us from recognising his true stature as a theologian and an evangelist until the final phase of his work brought him to our attention. Whatever verdict one reaches with regard to his advocacy of ecumenism, two things need to be said concerning this aspect of his life and work. First, his lifelong devotion to the ecumenical movement was, like everything else he did, the outcome of his understanding of the teaching of Scripture and the imperatives of the Christian mission. His book The Household of God was one of the most significant studies of ecclesiology in the twentieth century and shows beyond cavil that Newbigin’s ecumenism arose from deep and principled theological and missiological convictions. Second, whatever one may feel about such ecumenical engagement, I find it impossible not to admire his defence of the truth within that context and the courage and consistency with which he resisted liberal or neo-liberal forms of theology which he regarded as deadly threats to the Gospel. In almost his last writing he responded to the pluralist theology of religions being advocated by the likes of. John Hick and Paul Knitter with a directness that is not usually encountered in academia. Commenting on Knitter’s plea that ‘non-absolutist Christologies’ must be mediated to the ecclesia, Newbigin responded: ‘But I suspect that the church contains quite a few tough-minded Christians who are sufficiently familiar with unbelief to recognise it when they see it’. Can anyone seriously doubt that in Lesslie Newbigin we were gifted a Mr-Valiant-for-Truth?

It is impossible to convey here the range and depth of Geoffrey Wainwright’s exposition of Newbigin’s theology. His book contains little by way of critical evaluation, although he does cite non-Western Christians who, like Paulos Mar Gregorias, a Syrian Orthodox bishop in Delhi, felt that Newbigin sometimes treated national Christians ‘with a kind of paternalistic condescension’. However, the strength of Wainwright’s book is that it lets Newbigin speak for himself and, in so doing, reveals the remarkable significance of his ecumenical and missionary theology. As the author puts it in his opening sentence, the Church possessed in Lesslie Newbigin, ‘a bishop-theologian whose career was primarily shaped by his evangelistic and pastoral responsibilities’ and who yet made contributions to Christian thought that equal, if they did not exceed, in interest and importance those of more academic theologians.

By contrast, A Scandalous Prophet illustrates the controversial and divisive nature of Lesslie Newbigin’s work. While some contributors, like Colin Greene, George Hunsberger, Charles Taber and jenny Taylor, are deeply sympathetic to his attempt to articulate a missiological response to the culture of modernity, or the ‘Enlightenment’, others are, in varying degrees, critical of the ‘Gospel and Our Culture’ approach. These critics can be separated into those who share Newbigin’s fundamental convictions concerning the truth of the gospel and the missionary obligation of the church, while questioning aspects of his analysis and strategy, on the one hand, and those who really are scandalised by everything he stood for on the other. For these writers Newbigin’s theology is outmoded, exclusivist, and even incomprehensible in the context of postmodernity and pluralism.

The first group, those who are sympathetic critics, can be represented by Andrew Walls who, in a fascinating although brief contribution, implies unease at Newbigin’s negative verdict on the Christian response to the Enlightenment. Where Newbigin denounced Western syncretism, Walls while clearly recognising the inadequacies and shortcomings of the Enlightenment and the imperative need to move beyond it today, nonetheless observes that the churches of Europe appropriated the Enlightenment in a manner ‘which was not all a betrayal of the Christian faith’. Lesslie Newbigin was surely open to criticism here, since despite occasional assurances that modernity had brought benefits to the world, his assessment of the Enlightenment is deeply hostile and negative. Interestingly, almost all of Lesslie’s published work was addressed to the churches, only rarely did he write evangelistically, with unbelieving, secular people in mind. Yet when he did so, as in the little volume Honest Religion for Secular Man he produced some of his most interesting and creative work.

Lesslie Newbigin was often accused of, and as often denied, a nostalgia for the lost ‘ages of faith’ and a recovery of Christendom. Yet when he attempted to describe the kind of society that might result from a successful re-evangelistaion of Europe, what emerged was rather vague and could raise suspicions that a new form of sacral Christianity was in view. George Hunsberger, another sympathetic critic, thus questions the wisdom of speaking of the gospel as ‘public truth’ and warns that such language ‘moves once again in the direction of a certain kind of ‘Christendom arrangement, albeit in a new form’.

In sharp contrast to such sympathetic critics, some contributors to this volume are deeply unhappy with the ‘Gospel and our Culture’ project and are evidently scandalised by Newbigin’s entire theology. This is obviously the case with a Muslim participant, notwithstanding Newbigin’s growing respect for Islam and his remarkable recognition of the fact that this faith represented a most consistent and coherent challenge to secularism in the contemporary world. An Indian theologian, K.P. Aleaz, treats Newbigin’s christology as a form of fundamentalism, to be dismissed in favour of the ‘universal Jesus who belongs to all humanity’; Lynne Price views Newbigin as belonging to a generation that is out of touch with postmodern realities and locked into a theological method which assumes the continuing normative status of the western tradition; while, in a most extraordinary chapter, Werner Ustorf manages to write of what he calls ‘The Emerging Christ of Post-Christian Europe’ without making a single reference to Lesslie Newbigin and his work! The man who was the subject of the conference and its papers is simply ignored as Ustorf propounds an approach which Newbigin would certainly have seen as at odds with missiology based on gospel authority.

These two volumes are then quite different; the one consists of a deeply sympathetic exposition of Newbigin’s theology, while the other reveals how, within academia, his central stress upon the Bible and the non-negotiable uniqueness of Jesus Christ was controversial, to the point of causing a scandal. This brings me back to the point made earlier concerning the evangelical response to Lesslie Newbigin and his work: how and why did it come about that we missed the presence within Western Christianity of a man so gifted as an apologist, and missiologist and theologian? It is true of course, as Duncan Forrester makes clear in the opening chapter of A Scandalous Prophet, that Newbigin was deeply affected on his return from India by his reading of Karl Barth’s works (a theologian he had dismissed as unreadable at an earlier stage in his life) and there are legitimate questions to be raised concerning his views on the doctrine of Scripture and on the fate of the unevangelised. Nonetheless, the reading of these studies leads to the conclusion that Newbigin was an outstandingly gifted Christian apologist and an orthodox theologian of the first rank. It is probably the case that, having been nurtured within the SCM and subsequently operating within an ecumenical framework, Newbigin simply remained beyond the available horizon of evangelicals for historical reason which are well enough documented and understood. Having said that, we surely now in a different context, a fact reflected in the comment of Wainwright toward the end of his study to the effect that the most interesting efforts today at preserving and renewing ‘the classic Christian faith’ are those of people ‘who, across ecclesiatical and denominational lines represent an “evangelical Catholicism” or a “catholic evangelicalism” ’. In this situation, it is fervently to be hoped that should another Newbigin arise, whatever his ecclesiastical affiliation, our orthodoxy would prove generous enough to enable us to recognise him without reservation as a brother and embrace him without hesitation as a teacher.