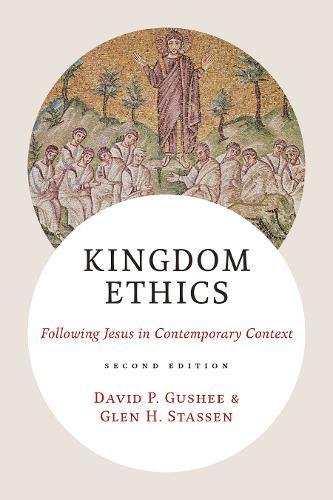 David Gushee and Glen Stassen present us an ethics text in the “Red Letter”/“Social Gospel” tradition. They met as student and professor, respectively, at the Southern Baptist Theological Seminary in the 1980s, and later served as colleagues at Southern in the 1990s, before moving on to other positions. Both found the changes wrought by the Southern Baptist “conservative resurgence” uncongenial, and the SBC comes under criticism in this work (p. 235).

The first edition was published by InterVarsity Press in 2003. As Gushee reports in the preface to this second edition, it has sold more than 30,000 English copies and been translated into eight languages. Christianity Today honored it in 2004 as the year’s best book in theology/ethics.

Stassen died in 2014, so Gushee has finished this edition alone, with occasional reference to Stassen’s thinking in recent years. (For that reason, when citing passages, I speak of “he” rather than “they,” since the version we have before us is ultimately Gushee’s.) Another signal development, reflected in this edition, is Gushee’s affirmation of homosexuality, which he explained in a 2014 book, Changing Our Mind (Canton, MI: David Crumm Media). This, of course, prompts fresh scrutiny of his approach to ethics, one that issues in conclusions so divergent from biblical tradition.

We see in Part 1 (chs. 1–9), that Isaiah 61 (the “good news to the poor” passage, with which Jesus identified in the Nazareth synagogue in Luke 4) and Matthew 5–7 (the Sermon on the Mount) are central to his argument that the Kingdom is the point to Jesus’s life and work. And by his account, the “seven marks of this kingdom” are “deliverance/salvation, justice, peace, healing, restoration/rebuilding of community, joy, and the experience of God’s presence” (p. 10).

He insists that the Sermon on the Mount is not meant to spell out an impossible standard which drives us to a despair relieved only by God’s saving grace (p. 94). Rather, each teaching is triadic and socially hopeful, moving from “traditional righteousness” (“You shall not kill”), to a “sinful pattern” (“being angry”), and finally to a “transforming initiative” (“Be reconciled”) (p. 95). Even the seemingly daunting precept in 5:48 (“Be perfect”) is actually just a call to be ethnically sensitive across the board (p. 101).

He is equally impatient with those who take “render unto Caesar” as an excuse to quarantine Kingdom work, limiting it to personal piety, home, and church. Instead, he says that this teaching was merely meant to stave off violent revolution and not to delineate spheres of authority (p. 141).

His “red letter” approach marginalizes the Epistles, though he makes some effort to correlate Paul’s teaching with his agenda. In this vein, he flirts with the sort of fallacious “argument from silence” that claims the church should embrace the culture’s shifting views on sexuality because “Jesus never addressed this.”

By focusing on the pre-crucifixion/resurrection/Pentecost words of Jesus, Gushee marginalizes the evangelistic riches of Acts and the epistles. Indeed, he can be dismissive of those keen to ask, “If you died tonight, do you know you would go to heaven?,” those who favor “born again” and “other worldly” language, and who focus on “churchy accomplishments like baptisms and filled sanctuaries (pp. 18–19).” He argues that the spiritual action should be centered on justice and community, items before us in this world.

Gushee might have spent time reflecting on how “churchy accomplishments” of the “born again” (from Pentecost to the Great Awakenings) have generated vast social transformation through the centuries. But he needs to keep the revivalists and “Roman Roaders” at arm’s length if he wants to stay on track, since they have an annoying tendency to befuddle the masses with pietistic opioids and to arrive at ethical conclusions at odds with his. He communicates the sense that Evangelism Explosion results in Kingdom Implosion, and he has a following.

As he digs into the topics, he also demeans the “casuists,” who wish to provide a scheme for computing duties, but he’s crafted a scheme of his own, with “Key Method Elements for Kingdom Ethics” (pp. 190–91), whose tenets honor his “seven marks” of the Kingdom. Thus, we must factor in the voice of the disinherited and oppressed, personal character, Christ-centeredness, a rule/principle/base rubric, Sermon-on-the-Mount centrality, transforming initiatives, the cardinality of love, the cardinality of human dignity, and a “four-box” diagram (p. 173), useful for both analysis and prescription, which takes into account the complexity of “conviction sets” and passions and loyalties.

What you get is a “Swiss Army knife” with dozens of blades and tools, which Gushee may deploy at his pleasure, and we can only guess at which one he might deem appropriate for the issue at hand. And aren’t some tools missing? Where is the church-discipline-for-the-sake-of-congregational-integrity device? And should there be an index listing for “holiness” other than “Holy war/crusade tradition”?

Having laid out an ornate system of angles in the first half of the book, in Part 2 he offers a number of chapters on particular issues. In chapter 11, he argues for “restorative justice” instead of retribution (p. 232), thus opposing the death penalty. In this connection, he indicts us for systemic racism (p. 216) and observes that all executions in the New Testament were unjust (another argument from silence). Furthermore, he fails to engage the arguments of such capital punishment proponents as C. S. Lewis and Bishop Joseph Butler, and, in discussing Genesis 9:6, he sticks to the first half of the verse, ignoring the part that grounds retribution in the imago Dei (pp. 221–23).

In chapter 12, he pleads the egalitarian cause, noting that Jesus elevated the status of women, putting the blame for lust on men (p. 237). Here, Paul doesn’t fare so well, for he was laboring under the “deeply ingrained patriarchy” of his context (p. 238). Not surprisingly, hundreds of interpreters have “puzzled over the nuances of Paul’s perspective” (p. 238). In this chapter, Gushee goes on to discuss gender-identity questions, and says that inclusion and concern for the “underside of history” commend the most accommodating stance to reduce their suffering (p. 249).

Regarding sexual ethics, in chapter 13, he states that “there must be sexual exclusivity in marriage,” and makes application to pornography and inappropriate familiarity with a non-spouse. He affirms singleness and celibacy but apparently allows for some cases of premarital sex within committed relationships, appreciatively citing Karen Lebacqz’s argument that ties sexual expression to “appropriate vulnerability” (pp. 263–64)

This chapter also follows Gushee’s shift on homosexuality. Whereas the first edition read, “Homosexual conduct is one form of sexual expression that falls outside the will of God,” he now takes a “revisionist,” i.e., “affirming” position (p. 267n1), saying the conflict is a tossup, “with both loyalties [to Christian tradition and to LGBT people] capable of being grounded in some account of ‘what the Bible says’” (p. 268). (Of course, that is true of any heresy or Scripture-twisting ethic.)

Regarding marriage and divorce, he ends chapter 14 inconclusively, having repeatedly disparaged “legalism or rule-and-exception casuistry” (p. 279), the approach taken by those who “demonstrate little sensitivity to the human context in which all Christian ethics is done and the chaos that is out there (p. 272).” So citing several Key Method Elements, including honoring Jesus’s “manner” and human “experience,” he pushes aside efforts to find criteria in Mark 10, Matthew 5, and 1 Corinthians 7, and focuses (an expression he uses repeatedly to hone in on what he likes and marginalize rules and principles he finds lacking) on marriage building and reconciliation, both of which are fine. But he leaves the pastor in the lurch when it comes to policy, whether the issue is remarriage or ordination. (By this time, one gets the impression that notions like justice, love, and experience, when deployed according to his wisdom, supply a universal solvent for dissolving traditional scruples.)

Writing on truthful speech in chapter 15, he defends lying to those who’ve broken the covenant of honesty, whether the offender is an evil regime or a slave master (p. 300). As for war, chapter 16, he opts for a form of just war (“just peacemaking”), but only after tortured discussion, consonant with the zealous pacifism Stassen espoused.

Chapter 17 commends prayer, and in chapter 18, he approaches economics in Sider-like fashion, disparaging greed, income inequality, globalization, consumerism, acquisitiveness, executive salaries, competition, capitalism, and “the idolatry of the market” (p. 372). His answer centers on redistributing wealth and applying Sermon on the Mount teachings to public policy. It is curious that, in pressing his point that “Jesus identified with the poor,” he didn’t engage, if only to marginalize, such warnings to the idle poor as Proverbs 6:11 and 2 Thessalonians 3:10.

On creation care (chapter 19), he shows his affinity with the Christians and Climate group, and distances himself from the Cornwall Alliance perspectives. On this road, he signed the former’s Evangelical Call to Action (along with, for example, Leith Anderson, Andy Crouch, Timothy George, Brian McLaren, Richard Mouw, and Jim Wallis), and didn’t sign the latter’s Declaration on Global Warming (whose signatories include Wayne Grudem, Richard Land, Tony Perkins, R. C. Sproul, Bruce Ware, and David Wells). In presenting his “earthkeeper stewardship” (p. 389), he faults a range of offenders, from the Gaia movement to the auto industry. (One assumes that the fossil fuels used by the trucks delivering his books and the chemicals needed to prepare and print the four-color, coated-paper cover, fell within Gushee’s guidelines for environmental acceptability.)

In chapter 20, he embraces “critical race theory,” which disparages “color blindness” and dwells on “white privilege.” The current chapter 21, on bioethics, combines three chapters from the first edition. In it, Gushee says we should act if the child were a person from the moment of conception (p. 423), but he is not so decisive when it comes to law, leaving room for disagreement (pp. 427–28); with circumspection, he defends the use contraception and reproductive technologies, such as in-vitro fertilization (p. 431, 434). Regarding end-of-life decisions, he opposes active euthanasia, with allowance for withdrawing or withholding care, making sure that the person is palliated (p. 440).

Reading this book, pencil in hand, makes for very slow going, as one stops again and again to make marginal notes, with a range of questions and challenges. For example:

I’ve used the image of a multi-tool knife, but I’d also suggest the idea of an exotic slot machine with windows for at least a dozen images. When it comes up all pineapples, you hit the jackpot. And, for example, that’s what happened for Gushee when he pulled the LGBT lever. All twelve of his criteria came through supportively, and he was ankle deep in coins. This satisfies some. But for most, he has performed an elaborate reduction to absurdity for the “multilayer, multimode model” he describes and commends in this book (p. 83).