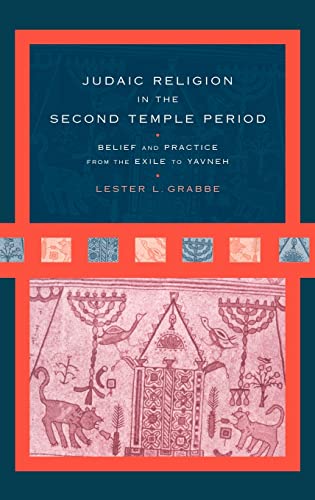 The author presents this book as a companion to his earlier Judaism from Cyrus to Hadrian (SCM, 1992, hereafter JCH). The former is a history of Second Temple Judaism; the present work he describes as ‘a synthetic history of religion’.

The method is inductive: Grabbe starts with specific sources and then works out to broader conclusions. Individual sources are set out clearly, each with a bibliography and introduction before an assessment of their contribution to or reflection of religious belief and practice in the period. They include literary texts (canonical and non-canonical), postulated texts (the P document), documentary texts such as papyri and other archaeological finds such as coins and inscriptions.

There are two major parts. Part One, the chronological survey, provides overviews of the Persian, Greek and Roman periods, followed by a shorter account of the transition to Rabbinic Judaism. Part Two discusses particular topics: temple and priesthood; Scripture, prayer and synagogue; sects and movements; concepts of the Deity and the spirit world; prophecy and apocalypticism; eschatologies and salvation; messiahs. Part Three, the conclusion, offers a ‘holistic perspective’ on Judaism in the period.

Grabbe begins with the Persian period because it marks a new departure in the history of the Jewish religion. He notes the importance of the sixth-century deportations into exile, but. argues (with reference to some of his earlier writings) that the bulk of the people was left in the land. Thus Grabbe is uneasy about taking texts such as Ezra and Nehemiah at face value, and he emphasises the theological rather than historical importance of the exile. He notes that many would see the Persian period as the time for the main editorial Work of collecting Jewish traditions into the present biblical books, and stresses its importance as the time when Judaism moved from having a king as its main ruler to a high priest as the main ruler. This sets the scene for the entire second Temple period and is the background against which he charts religious change through the Greek and Roman periods.

The book is intended as a synthesis of Second Temple Judaism as a whole, not as a background to the emergence of the Christians, but it seems a little odd (if understandable) that this variety of late Second Temple Judaism receives so little attention. Here too we might question why the Rabbinic movement—which Grabbe acknowledges as ‘a new phenomenon previously unknown to history’ (124) is seen to emerge from within pre-70 religion whereas Christianity is characterised as a ‘breakaway sect’ (126). This is a minor quibble about a peripheral issue in the book, but it is one which may be of interest to readers of this journal.

Also of particular interest to Themelios readers will be Grabbe’s presentation of religious topics. Space permits only a brief discussion of his account of Messianic beliefs. Here the NT is listed as one of the main texts to be considered, but it is given only six of lines. Grabbe observes that the NT has its own perspective on messianism, determined especially by its’ understanding of Jesus, but elaborates no further. Those familiar with the Messianic beliefs in the NT will find it instructive to note what is distinctive to them and what is shared with at least some of the other texts surveyed, but it seems unfortunate that Grabbe makes no attempt to do so himself, although he goes on to offer some comments about the relationship of the ‘son of man’ spoken of in Daniel and 1 Enoch with Jesus’ sayings about ‘son of man’ in the Gospels. Nevertheless, this general reticence suggests a definition of second Temple Judaism that is ideological as well as historical.

Grabbe expresses some disappointment that JCH was treated more like a textbook than a monograph. It seems likely that the same fate will befall this book, although it should be emphasised that its value as a reference or text-book is great. Its discrete sections are well-organised and clearly written, and undergraduates facing essay deadlines will find it a useful resource. There is little that is new, but it is an accessible and engaging treatment of its topic. It is to be hoped that it will be made available in a more affordable paperback form.