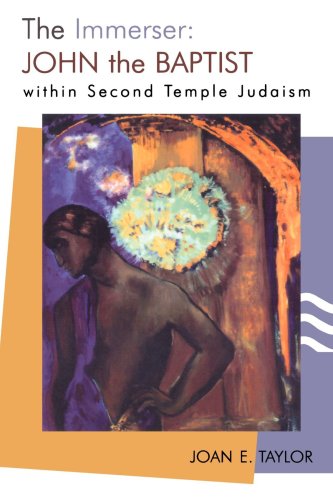 John the Baptist within Second Temple Judaism: A Historical Study

This book reflects a renewed interest in ‘the historical John’ sparked by the more general reappraisal of Second Temple Judaism. Taylor’s contribution may be set along side those of R.L. Webb. John the Baptizer and Prophet (1991), whose interest is also in the historical John, and of Markus Öhler. Elia im Neuen Testament (1997), who approaches his task in a more literary critical fashion.

Taylor sets out her case in six chapters. In dialogue with Webb and others, she first examines any possible relationship between John and the Essenes. Despite the close geographical proximity of John’s activity to Qumran, there is no link to the Qumran Essenes. Any contact would have been with urban Essenes but ‘… the overwhelming impression is that John should probably not be seen as having any direct relationship with the Essenes …’ (48).

Taylor’s chapter on ‘Immersion and Purity’ is probably the most illuminating. Here she places John’s practice firmly within Jewish purifcatory immersions. But John’s was not symbolic, did not confer forgiveness, and was not initiatory. Rather. John baptised those who had turned back to God. Outward purity could only follow inward purity. ‘With repentance and its proof in the practice of righteousness, the heart was rendered pure; God cleansed the heart and granted remission of sins. Now pure inside, one could become pure outside, and therefore immersion naturally followed’ (100).

John’s teaching (ch. 3) generally had its basis in Isaiah. John’s particular emphasis was upon zekhut. a later rabbinical term referring to ‘the protecting influence of freely chosen good conduct over and above what was required by the law’ (124). John castigated those who, as children of Abraham, thought they could depend on inherited zekhut. He demanded that they act righteously beyond the call of duty, especially in giving to the poor, and in light of the impending imminent judgement. John also called notorious sinners to righteous living, although he did not require them to leave their professions. In this regard. Taylor’s discussion of John’s counsel to women who were prostitutes is particularly interesting, if inconclusive. Some of John’s teaching could well have been attributed to Jesus by the Evangelists.

Taylor does not think John’s relationship with the Pharisees was hostile. In fact, this ‘influential religious grouping’ (211) may well have considered John to be a good man. They might have differed with him on the necessity of righteous deeds before outward purification but on most ethical issues they were close to John. To be sure, Matthew and Luke dissociate John from the Pharisees and Jesus from both John and the Pharisees, but Mark’s picture has all of them firmly linked, a far more historically credible portrait.

After discussing the death of John (ch. 5), Taylor considers John’s relationship with Jesus. Clearly, they were linked. Both were prophets but Jesus ‘asserted of John precisely what John denied -that he, John, was Elijah’ (315). In much of his teaching, Jesus was a faithful follower of John. But he also ‘demonstrated that he was in possession of the prophetic spirit and that the end was here …’ (316). More controversially, Taylor suggests that ‘It seems likely that Jesus came to John at the Jordan River as a repentant sinner, though whether he was or not is impossible to ascertain; decision about this will rest on people’s fundamental beliefs.’ (315).

Quite properly. Taylor considers Second Temple Judaism as the context in which to understand John. But the gospel pictures reflect modification by the early church as it moved away from Judaism. For instance, instead of predicting the coming of the agent of God, he predicted the arrival of Messiah Jesus. His baptism was not for outward purification following inward purification; it was a prelude for Christian baptism with water and Spirit. The list of differences between the historical John and the John of the gospels continues. ‘Such a defensive, apologetic tone in the NT writings concerning John is obvious … The Gospel writers may have considered John’s centrality at the origin of the Church a threat, but we do not need to continue to think so’ (320–22).

This is a fascinating mixture of sound historical judgement and arguments advanced on the most slender of evidence. Taylor’s discussion on immersion and purity as well as John’s relationship with the Pharisees is particularly helpful. Less convincing is her attempt to separate John completely from the Essenes; unless the NT writer’s have their picture of a Jesus who was not a sinner completely wrong, her speculation concerning the reasons why Jesus underwent John’s baptism is just wrong-headed.

In sum, this is a book that contains a wealth of valuable insight. But most readers of Themelios may find Webb’s portrait of the historical John more persuasive than Taylor’s. The publishers have recommended a paperback price that would present a serious challenge to the average student’s budget.