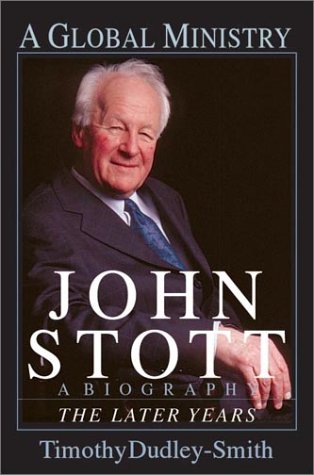 This is the second volume of Timothy Dudley-Smith’s biography of John Stott, taking us from 1960 to the present time. Volume 1 covers most of his work at All Souls, Langham Place, London. This volume concentrates on his increasing worldwide ministry and reducing role at All Souls. Combined with continuing university missions and other activities in UK, the result was that he was soon widely looked to as the leader of a revived evangelical Anglicanism at home and in Anglican and other churches in many countries abroad. This period coincided with the rapid expansion of university education worldwide and with the growth of indigenous evangelical student CUs in many countries. He was able to lead the first ever of such missions in several of the new universities and so help to create an appetite for solid, Bible based evangelism. Soon he was being asked to give Bible expositions, and to speak at ministers’ conferences on preaching, and found a widespread desire to learn how to expound the Bible. His emphasis on letting the Bible say what it actually does say was almost new in some countries, where relatively loose and subjective preaching had been the rule. What he loved most was to teach and preach the Bible and help others to do the same. He was always trying to ensure that the Bible ruled the thinking and preaching of the evangelical movements in which he became involved.

This book therefore traces some of Stott’s important missions and conferences, sometimes perhaps in excessive detail; but all of this is helpful in giving an idea of his enormous labours, and his growing influence. It must be remembered that this is a biography and not a history of the evangelical movement. Nevertheless it covers his central part in the 1967 Keele National Evangelical Anglican Congress (NEAC), his concerns at the less clear doctrinal stance of some at the 1977 Nottingham Congress (NEAC 2) and his further concerns of some about the widening spectrum at the 1988 evangelical ‘Celebration’ (NEAC 3). By then he was abroad so much that inevitably his influence at home was less powerful. His skill in drafting the conference resolutions at the Berlin and Lausanne International Congresses was very important. The book also covers briefly his reasons for not adopting a charismatic position.

Early on he was criticised, with some justification, for neglecting the application of biblical material; but he is shown to have remedied this in his later ministry, as his initiative in the London Institute for Contemporary Christianity (LICC) demonstrated. This also represented, as is shown, his change to an increasing emphasis on social responsibility as a necessary outcome, and so a concomitant of evangelism. He had an important role in bringing harmony and moderating the views of those who, as he put it, ‘entirely politicise and those who entirely spiritualise the gospel’.

He was called to head up a variety of organisations such as the Shaftesbury Project, the Church of England Evangelical Council, the Scholarship programme for overseas scholars and the ‘Bible Speaks Today’ series of commentaries. They needed someone of his stature to carry them forward. Others such as the Evangelical Fellowship in the Anglican Communion, the Evangelical Literature Trust and the LICC were his ideas from the start. The list of speaking and leading at conferences and chairing planning committees is astonishing.

All this while he was a prolific writer of large and small works. The total list occupies 92 pages in a separate volume! The final chapter brings together comments by some who knew him well and describes his life style and characteristics. One summarises it as: ‘rigorous self-discipline, absolute humility and a prayerful spirit’. It is a very challenging story. Typically he does not like the idea of a leader, as he does not find it in the Bible. He prefers the word ‘disciple’.

Altogether it is a fine biography. It can hardly fail to humble the reader and. cause thanksgiving that the Lord raised up someone with such a worldwide influence for biblical Christianity.