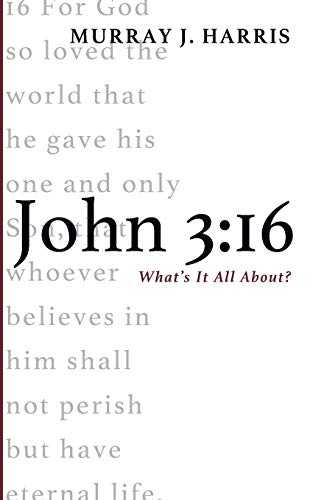 Murray J. Harris is professor emeritus of New Testament exegesis and theology at Trinity Evangelical Divinity School. The twenty-five words in the Greek text of John 3:16 are what Harris calls the most famous sentence in all literature. The author in this volume has provided an excellent exposition of this passage, which is the heart of the gospel. One senses in reading the book that his students were blessed to be able to have an exemplary model of exegetical method in their professor!

One of the strengths of this volume is that Harris constantly emphasizes context. He begins by placing John 3:16 in the wider context of the Gospel of John and the narrower context of Jesus’s conversation with Nicodemus. He argues that verses 1–10 present a dialogue between Jesus and Nicodemus, which is then followed in verses 11–21 with Jesus’s monologue. He acknowledges that there is uncertainty whether Jesus’s words end after v. 15 or v. 21; Harris holds the latter position but argues that the text is equally authoritative whether they are Jesus’s recorded speech or the reflections of the apostle John (p. 33n7).

The bulk of the book consists in an examination of the words found in John 3:16 as translated in the NIV. Harris divides the passage into eight parts, usually providing two pages, but sometimes three pages of explanation in each section. The subdivisions are as follows: For God; so loved; the world; that he gave; his one and only Son; that whoever believes in him; shall not perish; but have eternal life. Each section is based upon Harris’s work in the Greek text, but the exposition would be intelligible without any knowledge of Greek. If a person is interested, there are copious endnotes that provide plenty of material for Greek enthusiasts.

Let me make a couple of observations regarding his treatment of this crucial gospel text. Harris contends that the word κόσμος, translated “world,” refers to “all humans without distinction or exception” (p. 13). Warfield’s exegesis is preferable; he maintains that “world” in this verse is a “synonym of all that is evil and noisome and disgusting” (“God’s Immeasurable Love,” in Biblical and Theological Studies, ed. Samuel G. Craig [Philadelphia: P&R Publishing, 1952], 514). Harris recognizes that in the Gospel of John “there are ominous, negative ideas attaching to the term kosmos” (p. 13), but he chooses to go with a universal and distributive meaning.

I do appreciate, however, his handling of the clause “whoever believes in him.” Harris writes that there is “an open and warm invitation to all and every—‘whoever believes’” (p. 19). Calvin understands the passage in the same way: “He has employed the universal term whosoever … to invite all indiscriminately to partake of life” (Commentary on John’s Gospel [Grand Rapids: Eerdmans], 1.125). The general call is part of the good news without a doubt.

In connection with this universal invitation, Harris does an outstanding job in explaining what John is driving at in his distinctive idiom πιστεύων εἰς αὐτὸν. What does it mean to “believe in him”? Harris answers, “To believe in Jesus is to have faith that is directed towards him, faith that is focused on him.” “It involves the total commitment of one’s whole self to the person of Christ as Messiah and Lord for ever” (p. 20). This indeed is the invitation of the gospel, to give ourselves in total allegiance to Jesus, to cast ourselves upon him completely for our salvation.

This volume is a scholarly and clear exposition of John 3:16, a book that we can share with people who need to know the love of God and the eternal life that is his gift.