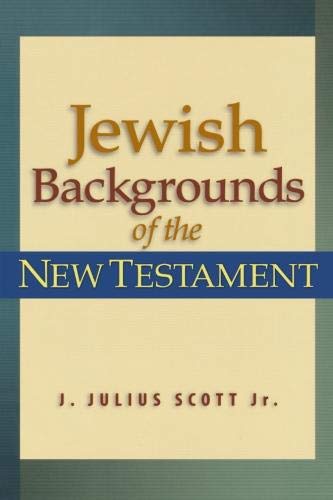 JEWISH BACKGROUNDS OF THE NEW TESTAMENT

This reprint of Julius Scott’s book not only provides basic information about the inter-testamental period, but also discusses the crises, responses, and religious thought of inter-testamental Judaism. His footnotes are also full of informative materials about the primary sources as well as several key scholarly books.

He begins by stating that inter-testamental Judaism is a distinctive period and he presents eight key points of a ‘new consensus’ on the period. In part one, he indicates various primary sources for the study of this period and then surveys the history of the OT, inter-testamental and NT periods. Although his treatment is brief, Scott correctly points out that the NT is one of the primary, reliable materials dealing with the inter-testamental history. He says, ‘many students forget to include the NT in a list of sources for Inter-testamental Judaism, even though it is among the most significant’ (32). Accordingly, he tries to include historical information from the NT in his study throughout his book. Scott’s treatment of the NT as one of the primary sources makes his book more reliable and academically fair.

Part two deals with Scott’s main discussion about two major events: the destruction of the Jewish state and the temple in the 6th century bc and the influence of Hellenism from the 4th century bc, and he argues for diverse reactions to these two events. Here he contends that the variety of reactions to these two crises in the 6th and the 4th century bc contributed to diversity within inter-testamental Judaism. He also indicates the general changes of emphasis of inter-testamental Judaism: emphasis on the moral law over the ritual, orthopraxy over orthodoxy and increased stress on particularism, exclusivism and superiority along with religious and cultural distinctives. Scott argues for a variety of scribal traditions in the several religious parties within inter-testamental Judaism.

Scott includes basic, useful information in the appendices for those who do not have any basic knowledge of the apocrypha, pseudepigrapha, Tosephta and Mishnah, Talmud and Tosephta.

Overall, Scott’s book provides readers. with essential information and important contemporary scholarly discussion of inter-testamental Judaism. However, it is regrettable that the bibliography does not include up-to-date secondary sources published since 1995, even the second printing of the book. Nonetheless, Scott’s book is an excellent, comprehensive, intermediate level introduction to inter-testamental Judaism as a background to the NT.