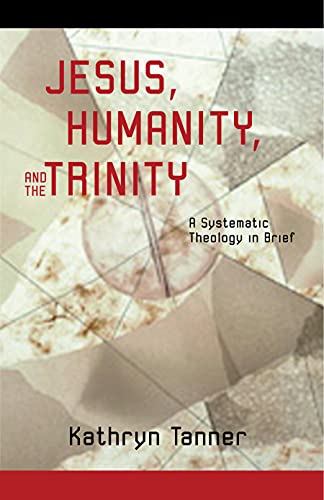 JESUS, HUMANITY AND THE TRINITY

Jesus, Humanity and the Trinity is the publication of Kathryn Tanner’s material presented at the Scottish Journal of Theology Lectures for 1999. In such a short compass, 4 lectures or roughly 120 pages, one is treated to an admirably broad range of topics. It is, as the subtitle suggests, nothing less than a brief systematic theology, and notwithstanding the clarity with which Tanner mostly writes this is the sort of taxing reading that is characteristic of substantial contributions to the field of theological learning.

This task is, for Tanner, far from a dry academic exercise, but is an attempt to meet an essential demand of everyday Christian living, namely an explication the nature of Christianity around its organising centre. The first lecture that maps out this theological terrain is called, ‘Jesus’, and reflects the theology presented here as christologically focused. In this chapter Tanner recovers strands of an early church account of Christ which are reworked to address modern concerns with human agency and freedom and modern emphases on conflict and process in human history. Tanner maintains that God is utterly ‘gift-ful’, that is, he is the all-giving Creator whose benefits and activity do not undermine but perfectly complement free creaturely action. This finds its rationale in the person of Jesus Christ where the divine and human are perfectly at one and yet perfectly themselves without reduction.

The second chapter situates Tanner’s christology and the way of being human it implies within a wide cosmo-theological frame. Thereby Tanner establishes contextually the intelligibility of the accounts of Christ and a graced human life, while laying out some of the many levels of relationship between God and creatures with which any full systematic theology would have to engage. The concept of gift-giving is exploited for its explanatory power over the whole sweep of reality. The Trinity and incarnation are central, since

in order for the whole of the human and natural worlds to be perfected with God’s own gifts, they must be assimilated to this perfect relation between God and the created world in Christ, by way of him. Indeed, the Word, with the Spirit, sent by the Father, has, since the beginning of the world in diverse fashions, been working for the embodiment of God’s goodness in it (36).

The third chapter, ‘The Shape of Human Life’, teases out some ethical and socio-political implications of graced, non-competitive human existence. In short,

living our lives in Christ according to the mode of the Son, should involve … our own service to that mission, spreading the gifts of the Father that are ours in Christ, empowered by the Son’s own Spirit (68).

We are to become the proper reflection of the giving God, which itself means becoming plastic to God’s giving of the good and receiving more of God’s unmerited gifts towards us.

The fourth chapter is entitled ‘The End’ and, unsurprisingly, deals with eschatology. The basic question at issue is, ‘how do we make sense of the apparent failure and futility of our efforts to manifest in our lives and carry into the world the gifts of God flowing to us in Christ’, that is, of sin, futility and death.

After a preliminary outline of the necessity for Christianity to maintain a realistic eschatology, Tanner then lays out the basic shape of such an eschatology, developed in light of the incarnation-centred Christology of the preceding chapters. Eternal life is, for Tanner, itself a greater gift than the relationship with God that creatures enjoy simply as creatures since it is unconditional. It is also a different sort of relationship from the rather external one that exists between God and creatures, as our very identity as creatures is redefined so as to be essentially constituted by relationship with God. Furthermore it is a greater gift because of the gifts it brings with it such as the divine attributes of imperishability and immortality. Tanner ends by explaining the main options that such a position affords for obligating and inspiring action to further the flourishing of human beings and the planet.

If one has to be picky, one might question whether Tanner’s account leaves the doctrine of sin without a sufficient stress on human lawbreaking and rebellion. Perhaps a greater engagement with Augustine, a surprising omission from the list of theological giants she appeals to would have led to a differently nuanced description of sin than ‘closing [one’s] eyes to and blocking the reception of God’s gifts’. But this is a more than worthwhile read and is to be highly recommended both as an introduction to the central topics of Christian doctrine and as a substantial contribution for the seasoned theologian to ponder.