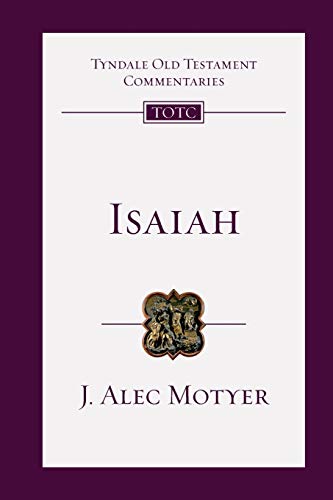 In 1964 the Tyndale OT Commentaries series commenced with Proverbs by Derek Kidner. Thirty-five years later the valued and much praised series is complete. To write on the whole book of Isaiah is a great challenge, worthily fulfilled twice now by Alec Motyer. His first and larger commentary, The Prophecy of Isaiah (IVP, 1993) was reviewed in Themelios 20.2 (1995). Comments made there are applicable to the present volume, so the focus here is on their comparison.

Motyer notes that ‘the majority of the explanatory and expository work in this commentary is certainly new in expression and quite considerably new in content’ (9). The work has indeed been freshly written, with only limited repetition of wording from the first volume. To that extent it is ‘new in content’. However, in sampling several key chapters in class this semester I have found little that is new in substance other than occasional nuances. But surely that is to be expected after a lifetime of detailed study.

That the structure is retained is of note. Motyer’s division into sections (especially chs. 28–37, 38–55) and his identification of a third messianic figure, ‘the conqueror’, have been criticised, but after re-examination he has not seen fit to change his views. A feature of the first work was frequent literary analyses of passages as a pointer to theological emphases. Unfortunately in the current volume much of that analysis is omitted or presented in compressed form, so the reader may overlook it in the midst of other detail. Also retained is careful attention to detail and word meanings in the verse by verse commentary (a characteristic of the series).

In two areas readers will need to go elsewhere for help. In addition to major commentaries, the 1980s and 1990s have seen a proliferation of studies across the theological spectrum on the book’s ‘unity’, intertextuality, theological emphases, and Christian use. Motyer’s introduction has one footnote alluding to the 1991 SBL Seminar papers, and a brief overview of a small selection of recent studies (27–28; but no mention of Goldingay, Williamson, Sweeney, Seitz, or Brueggemann). However, as in the first volume, there is no evidence of interaction with these studies. Other than Oswalt and Miscall, the writer’s main dialogue partners predate these discussions.

Secondly, given Motyer’s commendable concern to see reference to Christ, it is disappointing that the introductory section, ‘Isaiah and the New Testament’ (34–35), only uses NT references to argue for unity of authorship. So much of the book’s theology could have been discussed, including Pauline use relating to the ‘nations’. Similarly, the commentary proper could have noted much NT use of specific passages.

Libraries should have both volumes, but individuals will choose. Many will be glad of the less expensive Tyndale volume, which fits a lot of value into a small space (as with others in the series). The editor and publishers are to be commended for this. The larger volume, with its luxury of more space, is easier to read and contains more discussion and documentation. Whichever is used, Motyer’s comment on earlier Tyndale commentaries will be said of both his works, ‘God has been pleased to use [them] to his own glory in helping many readers to a fuller and deeper knowledge of his precious Word’ (10).