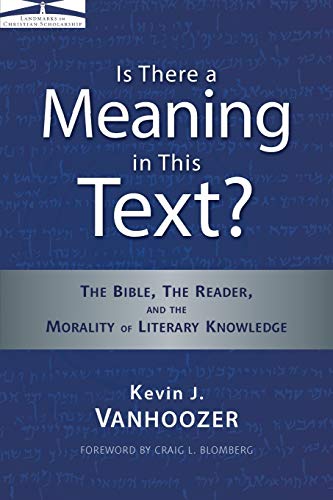 Is There a Meaning in This Text? The Bible, The Reader, and the Morality of Literary Knowledge

Stanley Fish’s Is There a Text in This Class? has become a defining work for post-structural or postmodern literary criticism. Fish represents one of two major wings of this movement—reader-response criticism—which, along with its counterpart deconstructionism, argues that the meaning of a written work is either the product of the interaction of a reader with the text or the wholesale creation of the reader. Given the pervasiveness of these trends in literary thought, especially across the universities of the Western world, a rigorous critique of their tenets seems crucial. Anthony Thiselton is the one evangelical Christian who has previously and consistently tackled this job in his many writings, but this monumental work by a scholar who has taught at both Trinity International University in the States and New College, Edinburgh, now emerges as the one volume that is thorough, convincing and readable in demonstrating the incompatibility of numerous recent interpretive fashions with the Christian faith in particular and with successful interpersonal communication in general.

Vanhoozer creatively and perceptively links the three major movements in modern literary criticism—that have focused in turn on authorial intention, textual meaning, and reader response—with the three persons of the Triune God. ‘A trinitarian theology of the Word of God conceives God as author, as message, and as power of reception’ (161). If there is a God who wants to communicate with his creation and who has made humanity in his image to communicate meaningfully with one another, then authorial intent must be a focus for a speech-act to succeed. This is not to revive the ‘intentional fallacy’ of trying to recover an author’s state of mind but it is to pay careful intention to textual clues that successful communicators do leave in their written works to point to their purposes. If God, the Son has become incarnate in Christ, the Word, as a definite sign, as part of the Father’s communicative efforts, then it stands to reason that all words have limits on what they can mean, especially when they are interpreted in the larger contexts of sentences, paragraphs and literary forms or genres. Apart from these assumptions, human agency and freedom themselves are threatened. If the Holy Spirit exists in part to illumine human hearts as to the meaning and significance of inscripturated words, then it makes sense that part of his more general work with all people is to enable accurate interpretation, even though it is never perfect or exhaustive because of human fallenness and finitude.

This book at its heart is therefore a theology of hermeneutics. But Vanhoozer explains that he did not begin the project with that intention. It started first of all as a more philosophical and logical critique of the untenability of postmodernist hermeneutics and as a defense of the recoverability of meaning in texts. A substantial percentage of the book still serves these goals, so that it is by no means only Christian or Trinitarian readers who can benefit from and should read this tome. Following N.T. Wright, Vanhoozer persuasively defends a critical realism (meaning can be adequately determined) as a conscious alternative to both naive realism (meaning can be comprehensively determined) and non-realism (meaning cannot be determined). He recognises the valid points that postmodernism, even in its most deconstructive forms, have made, primarily against attempts to use texts in authoritarian fashion. But he ultimately demonstrates that it is the critical realist, not the deconstructionist, who commands the moral high ground. Until one has attended carefully to something other than oneself and has allowed for the possibility of a text to transform us (possibilities that are logically incompatible with purely reader-oriented theories of interpretation), one has not read responsibly.

It is impossible to summarize the nuggets of wisdom that appear on almost every page of a detailed work of this nature. Though the work could probably have been shortened by avoiding the frequent repetition of themes, the book does drive home numerous countercultural insights in its current form that an abridged version might not have accomplished as effectively. Vanhoozer, like Thiselton before him, draws on ‘speech-act’ theory at numerous points, including to redefine the difference between stable ‘meanings’ and endless possible ‘significances’ in ways that should forestall the harsh critique that has beset an advocate of authorial intention like E.D. Hirsch. Meaning is a function of illocution; significance, of perlocution. Like Fish, Vanhoozer writes in a delightfully entertaining way and has woven in numerous plays on words, not least in his subheadings of sections, reminding us that more traditional interpreters can be as creative as more avant-garde ones. Vanhoozer’s command of the secondary literature is magisterial and he practises what he preaches (as virtually all reader-response critics sooner or later do not) in his handling of others’ writings. Perhaps my only regret after working through this book is that it was published with Zondervan without any reference to a forthcoming British edition, because sadly, Zondervan’s works are still not adequately consulted either in the English-speaking world outside the US or in non-evangelical circles within the US. Like Vanhoozer’s published thesis on Ricoeur, this work is worthy of Cambridge University Press (or Oxford, or Fortress in the US). One can only hope it will somehow get to the people who really need to read it—today’s ‘cultured despisers’ of either traditional hermeneutics or Trinitarian Christianity, or both.