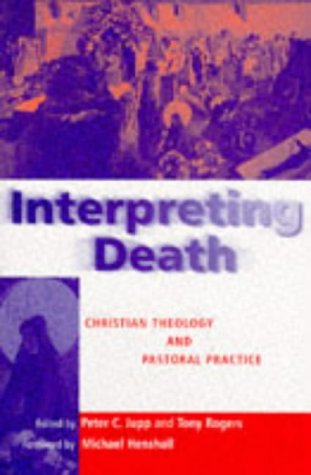 Interpreting Death is concerned with the changing culture and theology of death and the funeral in Britain. The collection of essays arose out of the Churches’ Group on Funeral Services at Cemeteries and Crematoria and is written from an ecumenical Christian perspective. It is intended for professionals concerned with Christian funerals and ministry to the dying and bereaved and other people wanting to understand the implications of these changing attitudes and practice within contemporary society.

The editors accurately and usefully note that death, which has become institutionalised and no longer part of our common experience, is often a taboo subject in contemporary society. In the last fifty years in Britain, burials have been increasingly replaced by cremations and the location of the funeral service is shifting from a church to a crematorium chapel. The authors argue that these shifts are changing the nature of funerals, their liturgy and the theology of death.

The book is divided into three parts. Part one investigates the changing patterns and context of funerals in Britain and the impact of these changes on funeral ministry. These chapters explore Christian beliefs about death, the after life and human mortality. The second half of this section explicitly discusses a theology of the funeral and disposal of bodies. The funeral acknowledges mortality and death, while pointing to the hope that Christ’s death and resurrection provide.

Section two is more practical and usefully focuses on issues of bereavement and faith. These chapters highlight the significant role of funerals for the bereaved. The role of belief within bereavement, the impact of death and loss on faith, the stages of grief and potential role of clergy are also discussed. One chapter addresses the existence of belief in life after death in contemporary society. The section concludes with a discussion of three key contemporary issues which face all those involved with death, bereavement and funerals: non-standard funerals, peri-natal death and HIV and AIDS.

Section three specifically focuses on the liturgy of the funeral from Anglican, Roman Catholic and Free Churches’ perspectives, exploring some potential core elements of funeral liturgy and the current trend toward adapting traditional services to be more personal. It also examines some differences and implications of committal in the crematorium rather than burial.

This collection of essays provides a useful overview of issues surrounding death. It highlights a significant change and shift in funeral services, in practice and liturgy, from burial to cremation. The editors do not stop there and helpfully explore the implications of this shift for individuals and wider society. They also recognise the danger that the role of the Christian church and its clergy are becoming more removed from wider society at this critical point in life.

Although this book offers a helpful introduction, many different ideas are presented within it. This may leave some readers with the impression that the sections and themes are not given enough in-depth analysis. Furthermore, the mixture of theoretical and practical material may be unsatisfactory to some readers. Yet, this mixture provides a necessary balance when looking at issues of death and theology, their importance and impact on people’s lives. To be effective, theory and practice should inform one another.

The ecumenical approach and spectrum of authorship may not appeal to all Christian readers, but can be very helpful when approaching the difficult issues surrounding death and funerals. Overall, the editors are clear about the aims and purposes of the volume and this book can serve as a useful resource and starting point for those involved with or interested in this crucial area.