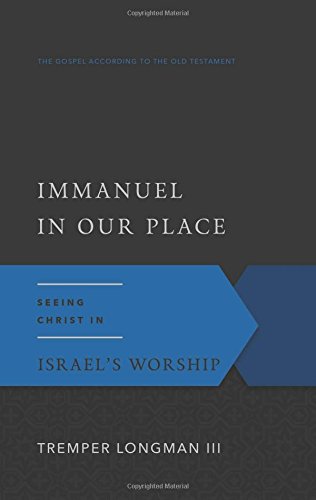 IMMANUEL IN OUR PLACE: SEEING CHRIST IN ISRAEL’S WORSHIP

This book is part of The Gospel According to the Old Testament series that has already been mentioned in Themelios—see Simon Gathercole’s article on OT devotional books in Volume 27.3. It is a fine addition to the series. Tremper Longman III is well known, both for his more technical scholarship as well as his popular treatments of OT matters and this book is an excellent example of the latter. Its aim is to provide a priestly theology of the OT in accessible, but thoughtful form and he has been extremely successful. The benefit of this book is not only in its stand-alone qualities but also in the dear commitment to the fundamentally Christocentric nature of the OT that marks this whole series of biblical theology titles.

The book falls into four main sections. The author deals respectively with Sacred Space (Eden, Altars, Tabernacle, Temple); Sacred Acts (the Burnt Offering, Tribute and Fellowship Offerings, Sin and Guilt Offerings); Sacred People (the rise of the Priesthood, Priestly Life Style, Priestly Service); and Sacred Time (the Sabbath, Pilgrimage Festivals, Festival of Trumpets and the Day of Atonement). Each of the four sections has a chapter on Christ and his relationship to each of these sacred aspects of OT priestly theology. If biblical theology is part of your staple diet then there will be little that is new or revolutionary here, but as a popular introduction to reading the whole Bible christologically this is a good place to start.

A particular benefit is Longman’s attention to detail. He not only discusses the meaning of Hebrew words in an illuminating way but he also considers how the variety of OT sacrifices and the specifics of the OT sanctuary furniture, all serve to deepen the richness of his portrayal as Christ our great high priest Along the way he models how not to read the OT, with examples from the weird and wonderful approaches to understanding the tabernacle. Theologically insightful comments inform the approach to individual texts—the reasons for God’s prohibition of David as temple builder are redemptive-historical; the Levites’ bloody zeal in Exodus 32 qualifies them as candidates for the priesthood as they show themselves to be protectors of God’s holiness.

In places Longman does not seem to go far enough in pushing through the biblical theology progression he so clearly outlines. Each chapter ends with reflection questions. These are of varying quality and usefulness, and a good proportion of them address the application of his material to the contemporary church. The issue here is that the questions are worded in such a way that you can’t help but get the impression that Longman often wants positive answers to questions which late chapters seem to answer negatively! More importantly, the chapters on Sabbath and Christ are probably the weakest in the book and don’t really help the newcomer to see the biblical trajectories on Sabbath that transcend the ‘is Sunday the Sabbath?’ question. Longman’s categories of progression are almost exclusively from the OT to the NT with very little reference to how the OT trajectory itself increasingly ties the Sabbath to Israel’s redemption and beyond that to the eschatological redemption: this clarifies the NT’s treatment of Sabbath and prevents moving too quickly to the matter of Christian gatherings on particular days, something which Longman does.

However in terms of the value of the book, these are minor criticisms and should not be taken to denigrate the whole. This is reverent and godly scholarship that points us to Christ and is heartily recommended.

David Gibson is the Minister of Trinity Church, Aberdeen, Scotland. He is author of Reading the Decree (T&T Clark, 2009) and co-editor of From Heaven
He Came and Sought Her (Crossway, 2013).