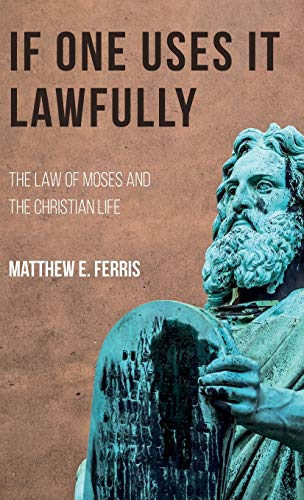 If One Uses It Lawfully: The Law of Moses and the Christian Life

Does the Mosaic law have a continuing role for Christians and, if it does, what is that role? These are important questions and yet the range of views, both ancient and contemporary, attests to the difficulty of reaching satisfactory answers. Matthew E. Ferris, cognizant of the wider debate, writes to critique the popular assumption that the Decalogue (or Ten Commandments) constitutes a “rule-of-life” for Christians. Against that understanding Ferris maintains, “the position of Christian freedom from the law is the only scripturally consistent one” (p. 4). Accordingly, the pattern for Christian living ought to be Jesus, not the law (p. 9).

In chapter 2 Ferris turns to defining “law” and establishing its extent. The need for this, as rightly recognized, is that “law” has many connotations in the Bible. Ferris argues (again, rightly in my view) that the law must be considered a whole. Hence, attempts to subdivide OT law into moral, ceremonial, and civil categories are regarded as untenable (pp. 14–18). On this basis, Ferris also criticizes notions of “trans-covenantal” law—that is, moral regulations, synonymous with the Decalogue, given to Adam by God. He concludes, “Despite confessional documents, there is no Scriptural support for placing the moral law in Eden” (p. 28). Ferris thus highlights discontinuity between old and new covenants to argue that the Mosaic law bound only Israel, not people generally.

This leads to consideration of the law’s purpose in salvation history. The Decalogue is understood as a time-limited treaty document between Israel and God (pp. 37–38). Galatians and Romans underpin Ferris’s conclusion: “in all of Paul’s discussion of law, he presents an unfolding narrative of God’s dealings with mankind that consigns the law to a prior age.” In this new era, however, “the Spirit’s indwelling of believers means that we pattern ourselves not after the law, but after the risen Christ as the Spirit enables” (p. 59). The law, therefore, including the Decalogue, cannot be the basis of Christian sanctification; nor can it define what doing good looks like for Christians (p. 41).

Chapter 4 surveys several important Protestant writers—Luther, Calvin, Wesley, Berkhof, and Cranfield—to evaluate their view that the law functions as guide to life for the regenerate (the so-called “third use of the law”). Ferris suggests this position is problematic because it removes consequence from command. Furthermore, he deems it a “redefinition of what the law is…. It is no longer the Ten Commandments, but the Ten Suggestions” (p. 65). However, Ferris here assumes a definition of law (as statutory regulations that must be obeyed) that he has not demonstrated. Indeed, lack of precision regarding the definition of “law” is a problem that runs through the volume. ”Law” is equated with the Decalogue (p. 94), the Mosaic covenant (p. 28), the Pentateuch (p. 14), and even the OT as a whole (p. 118). While this might reflect the nuances of νόμος in the NT, it detracts from the clarity of Ferris’s presentation.

The impact on Christian living is explored in chapters five and six. Ferris posits a distinction between keeping the law and fulfilling it. Christians, he says, fulfil the law by living Spirit-filled, obedient-to-Christ, lives. Using a helpful analogy, Ferris suggests the difference is like that between native and non-native speakers: native speakers do intuitively what non-native speakers only approximate by following grammatical rules (p. 87). Based on Galatians 6:2, Ferris suggests that Christians should consider themselves “en-lawed” to Christ (p. 102); as presented with a person, not a code. Renewing the mind, learning Christ, walking in love, and in the Spirit do what the law could not: transform believers into Christlikeness (p. 103). The Epilogue asserts the book’s major contention sharply: “we are not under the Mosaic law in any way … it has nothing to say to those in Christ” (p. 114).

This final statement (reminiscent of Luther) raises the question of how OT law functions for Christians as Spirit-inspired and Spirit-applied Scripture. This is a question, however, that Ferris leaves substantially unaddressed. Here also, the reader feels other limitations in the volume. Ferris’s discussion of the law’s purpose, for instance, is overwhelmingly shaped by Reformation categories. Thus, while the Reformers’ “three uses” are critiqued, the validity of the categories is simply assumed. In fact, one of the most striking features of the volume is its lack of scope. The biblical case is positioned on Romans and Galatians with occasional references to 1 Corinthians. While these important texts are handled well, the sample set is rather meagre considering the available data. What about the contribution of Hebrews? Or James? Or the Johannine literature? Thus, when Ferris concludes that, “The New Testament presents” (p. 113; emphasis mine), he is substantially overstating what has been demonstrated. Moreover, when it comes to OT texts, the silence is almost total. This is remarkable in a book that purports to define OT law (ch. 2), articulate its purpose (ch. 3), and consider its ongoing function (chs. 4–6). The resulting discussion thus pays no attention to recent developments which have clarified our understanding of OT law (including its literary artistry, rhetorical purposes, social function, and interrelationship with other ANE law codes). This lacuna is substantiated by the bibliography which contains only three treatments of the Decalogue (by Pink, Rooker, and Seitz) and one OT commentary (by John Wesley). One cannot avoid concluding that the argument has been based on a canon within the canon.

While If One Uses It Lawfully mounts an effective case against the “rule-of-life” position, and is commendable to that end, the volume is weakened by limited engagement with the Scriptures and by being out of touch with developments in the secondary literature.