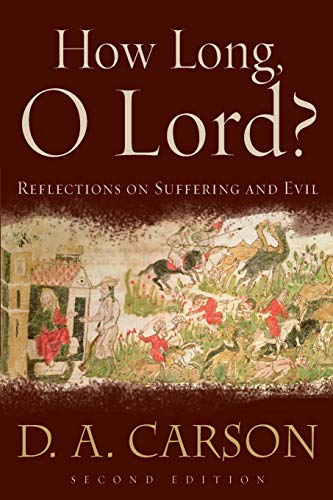 How Long, O Lord? Reflections on Suffering and Evil

D.A. Carson, Professor of NT at Trinity Evangelical Divinity School, has written a non-technical book about suffering for a general audience which, unlike the normal fare, is not intended to be read primarily by people who are actually in the midst of misfortune, malady, or misery (pp. 10, 247). Rather, Carson’s book is ‘written by a Christian to help other Christians think about suffering and evil’ before suffering strikes home, in the conviction ‘that when such things occur we (will not be) devastated because we have cherished false expectations’ (pp. 9, 62; cf. pp. 20, 116, 247). Hence, Carson’s work is intended to be ‘preventative medicine’ against those ‘false expectations’ harboured by ill-informed or immature Christians ‘as to what God is like, what God does, what place suffering has in this world’ (p. 10, cf. p. 247).

Positively, the antidote which Carson administers is a ‘biblical framework’ (p. 39) that is realistic concerning the suffering Christians will undoubtedly encounter as a result of being sinful people who not only live in a fallen world which stands under the judgement of God, but who also, in some cases, must suffer unjustly and innocently as God’s people (cf. esp. pp. 20, 110, 116, 138, 159, 168, 194, 200). Second, Carson endeavours to be faithful to the biblical witness concerning the divine purposes of suffering and the character of the sovereign God who reigns over his creation in treating the relationship between sin and suffering (chapter 3); the questions of social evil, poverty, war, and natural disasters (chapter 4); the suffering of God’s own people as his people (chapter 5); divine curses, holy wars, and hell (chapter 6); illness and death (chapter 7); the value of knowing biblical eschatology (chapter 8); the meaning of the book of Job (chapter 9); the implications of knowing that God himself suffered (chapter 10), and an appendix on AIDS.

Throughout his work Carson also strives to be faithful to the biblical testimony and tension concerning the relationship between God’s transcendence and his personal, interactive nature; and between God’s sovereignty and human responsibility. His discussion of the various kinds of suffering in chapters 3–10 is therefore framed on one side by a broader discussion in chapters 1–2 of the problem of evil and the ‘false steps’ which people have taken in an attempt to respond to it, including not only secular arrogance, ignorant Christian triumphalism, and atheism, but also the ‘sub-biblical’ Christian views of a self-limited God based on a view of ‘free will’ which makes God contingent upon human choices and argues that a knowledge of evil is necessary to the knowledge of good. On the other side, Carson offers biblical support for the fundamental perspective of ‘compatibilism’ which underlies and is supported by all of his discussions (chapter 11; cf. e.g. pp. 71, 146, 158f., 164, 173f. etc.). ‘Compatibilism’ is the view that the Bible clearly and simultaneously teaches both God’s sovereignty, even over evil (‘when the Bible speaks of God’s permission of evil, there is still no escape from his sovereignty’ p. 224), and human responsibility. These two truths may not be able to be reconciled with our finite understanding, but as such they make up the ‘mystery of providence’, which ‘defies our attempt to tame it by reason … we do not know enough to be able to unpack it and domesticate it’ (p. 226). Nevertheless, these two truths are ‘compatible’, rather than presenting an irreconcilable contradiction or forcing one to admit to sheer nonsense at the very heart of the biblical message (pp. 201, 212f.).

Hence, when all is said, the problem of suffering and evil brings us face to face with the mystery of God’s own character and nature (pp. 218, 239). But Carson also follows the biblical conviction that in coming to know God better ‘we will learn to trust him; and in trusting him we will find rest’ (p. 239). Carson is clear that the ultimate help in times of suffering is not a consistent and biblically appropriate set of beliefs, as crucial as these are to the life of faith, but the comfort that comes directly from experiencing the love of God itself through his Spirit (pp. 20f. cf. 127f., 243–245). Carson therefore appropriately concludes his work with a series of basic, but sound and helpful pastoral reflections on gaining the comfort of God oneself and on being a channel of it to others (chapters 12–13). True to his convictions concerning the centrality and necessity of biblical doctrine for the life of faith, these ‘practical’ suggestions are the way in which the mystery of God’s sovereignty and providence work themselves out in the life of the believer, so that the tension between divine sovereignty and human responsibility in the life of prayer, evangelism, or mutual exhortation and comfort is never allowed to resolve itself by eliminating or relativizing either pole (pp. 201, 230, 232, 235ff.).

Those who, like myself, share Carson’s high view of God’s sovereignty, even over evil and suffering, and his conviction that God uses suffering as an act of judgment, as well as of mercy and redemption, will welcome Carson’s presentation with enthusiasm. It is sound theologically, well written for the church and student, and filled with the kind of constant pointers to and from the biblical text that make it impossible to ignore his positions, even if one disagrees with him. And given his audience, which he for the most part keeps carefully in view, one cannot fault him for stopping short at times from answering definitively or pursuing more deeply some of the questions raised. Rather, Carson’s book provides an invitation to pursue the Scriptures for oneself in answer to these crucial theological questions and fundamental issues of life. In doing so, for example, one will want to ask in more detail than Carson does just how the manifestation of God’s power and presence, and hence our happiness (!), are brought about through suffering, so that suffering itself becomes the primary vehicle through which God is glorified, thereby meeting the deepest needs of his people. One will also want to pursue in more detail the ways in which God’s miraculous deliverance functions to encourage the faith of God’s people when no such miraculous deliverance is forthcoming, and other such questions. But the very fact that the book stimulates such reflection is part of its value.

Carson’s emphasis on God’s exalted, sovereign power, unwavering justice, and loving mercy in and through suffering, and his application of the twin truths of God’s sovereignty and human responsibility to the various issues and basic questions of life are refreshing. Moreover, Carson’s judgments consistently reflect the kind of God-centred theological focus that is sorely needed; but increasingly hard to find in contemporary biblical and theological works written for the Church. They will certainly encourage the faithful to persevere, so that the author’s goals have been met in a way that is genuinely helpful. I therefore recommend the book strongly for both students and lay people alike.