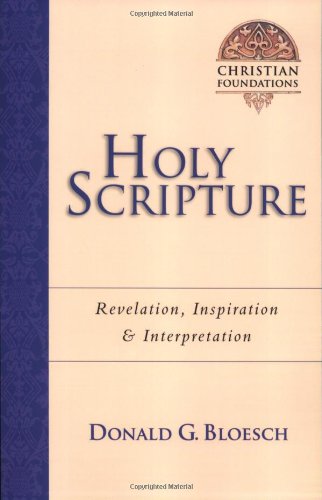 Donald Bloesch, a long-time outstanding theologian in the United States, is due thanks for presenting his position on an often murky topic: the relationship between the Bible and the Word of God or revelation. As the reader will soon see, I disagree with Bloesch in a rather significant way. But I am still thankful that he wrote this book so that his position may bring about progress in the task of theology. The book is written so that the theology student will understand his basic position, but nuanced so that it contributes at the cutting edge of bibliology.

Bloesch concentrates on advancing the Word of God as synonymous with revelation but distinct from the Bible. The Bible ranks high for Blesch in life and theology. Therefore the Bible remains the only and necessary source for revelation through the Holy Spirit. The Bible is (1) a witness to the revelation given to those who wrote the Bible, (2) a record of revelation mat occurred around them, and (3) a medium or channel for revelation that gives us understanding today. Although the Bible is necessary for Christian living, it is not the living Word of God for us. For epistemological and theological reasons, the latter comes only as the Spirit communicates to us the truth and power of the cross of Christ.

Bloesch’s position falters under tire weight of hermeneutics. The best hermeneutical tool he offers is a relationship of a person to the Holy Spirit. While I agree that the Spirit is important in hermeneutics, I do not agree with Bloesch that there is no revelation without someone to receive it. (He offers an explicit analogy to the idealist’s ‘A tree falling in the woods makes no sounds without someone to hear it.’)

Bloesch’s point is not that there is no meaning in the text. His point is that the meaning of the text may not be the meaning of revelation. Critical tools are useful, but only the Spirit can provide tile ultimate meaning. The ultimate, or objective, meaning resides in the Spirit and is only accessible through application of the cross to one who believes. To distinguish the meaning of the text versus the meaning of revelation, he calls one the historical meaning which includes both authorial intention and the way in which the text was received in the community of faith. He calls the other meaning the revelational or spiritual or pneumatic meaning that the text assumes when the Spirit acts on the text in bringing home its significance to people of faith. That is tire Word of God. That is revelation. Critical tools are useful for accessing authorial intention, but that does not access revelation. Even though Bloesch affirms that he is not a postmodernist I have to think that his hermeneutics lie dangerously close to reader-response criticism, ‘whatever the Spirit is telling you must be the meaning of revelation’. I am afraid that this implication of Bloesch’s position places it on precarious sand.

The final difficulty with which I will deal is that Bloesch offers a skewed critique of ‘rationalistic evangelicalism’. Bloesch outlines three approaches to Scripture: his own, where the Bible is the divinely prepared channel of divine revelation; tire liberal view, where the Bible merely provides insights into universal experience; and the rationalistic evangelical view, which ‘virtually equates Scripture with divine revelation’ (p. 18). He claims an affinity to the rationalistic evangelical view, but distinguishes his view because he imagines that the former contains all sorts of hideous hermeneutical monsters such as ignoring genre concerns (using the same rules to interpret metaphors, narratives, and teaching—all literalistic), ignoring human misconceptions reproduced by the scriptural author, disallowing the Spirit a role in interpretaton, etc. Perhaps Bloesch is unwilling to admit it, but there are plenty of authors that affirm the Bible as revelation and practice responsible hermeneutics.

Bloesch nuances his position more carefully than this review can represent, and addresses more topics than this review can include (truth, inerrancy, epistemology, myth, and Rudolf Bultmann). When it came to his basic position, and Bloesch spoke highly of the Bible as the Word of God (and it happened often), I was in hearty agreement and thought this a viable position. When Bloesch distinguished the Bible from the Word of God (which also happened often) I had to disagree because of the implications for hermeneutics.