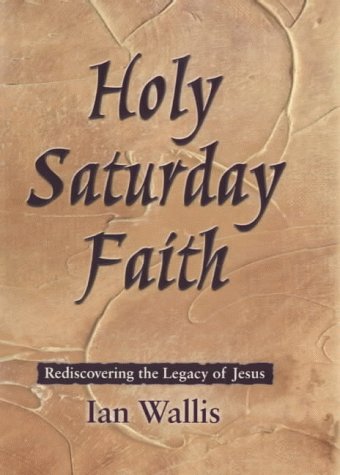 Ian Wallis is an Anglican vicar in County Durham who has written what is basically a meditation on the time when Jesus lay in the tomb. It is accompanied by a liturgical service for worship on Holy Saturday, which gives the reader a clear picture of what his intentions are. The author starts off by admitting that there is not much material to go on, especially if one assumes that the Gospels are basically factual accounts of what really happened that first Easter weekend. In so far as the church has ever thought about it, the period of Jesus’ death has been discussed in connection with his descent into hell, a subject that Mr Wallis never mentions. His approach is one that can only be described as bereavement counselling, and he examines the disciples’ reaction to the crucifixion in that light.

Mr Wallis does not actually deny the historicity of the resurrection but he regards it as secondary, and possibly even irrelevant to the disciples’ understanding of Jesus. To his mind, the early Christians were coping with bereavement as much as anything else, and the resurrection must be understood as one part of their response to this. Admittedly, it did become a very important part of it, but its success was due to the way in which it managed to embrace all the factors at work in the grieving process, which picked up the sayings of Jesus of Nazareth and transfigured them in a new experience of love, forgiveness and reconciliation. In support of this thesis, Mr Wallis gives us a great deal of information about Jewish laments, and the ways in which Jesus’ contemporaries were taught to grieve. He then applies this information to the NT and regards it as a satisfactory explanation of the kind of testimony to Jesus which we read in its pages.

It is an interesting theory, but is it true? Is it even plausible? The answer to these questions, as Mr Wallis recognises, all depends on what we think about the resurrection’s historicity. If we believe that it occurred thirty-six hours or so after the crucifixion, then the main thesis of this book is impossible—there would have been no time for the things Mr Wallis is talking about to have taken place. Only those who are prepared to take a longer view of the resurrection, and see it as a theological development rather than as a historical event, will find much sympathy with his arguments. That excludes evangelicals, of course, though we should not discount Mr Wallis’ abilities as a bereavement counsellor. He is almost certainly a good pastor, even if his theology leaves something to be desired. But those interested in what happened between Good Friday and Easter would be better off thinking about Jesus’ descent into hell than about the disciples’ emotions at that difficult time. Too little is known about that subject to make speculation either wise or profitable, and we ought to conclude that divine silence on the matter is a clear sign of the most prudent course for us to adopt.