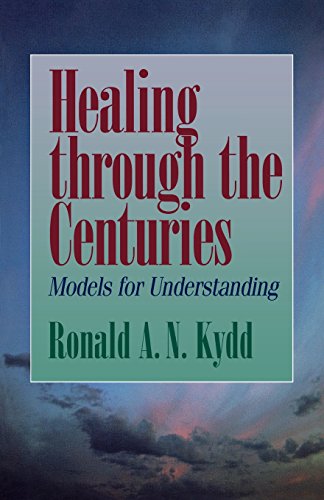 Healing through the Centuries: Models for Understanding

Divine healing is defined by Kydd as the ‘restoration of health through the direct intervention of God’ (xv), and is exemplified in the healing ministry of Jesus. His ‘priorities, concerns and approaches should provide the model to which the ministry of the church should be compared’ (xvi). Healing, for Jesus, had both a narrow and a wide focus: the former, said to be Jesus’ main concern, involved the healing of individuals, the latter the healing of situations and indeed of the world itself. Kydd suggests that historically the church has mainly been concerned with the narrow, the sheer breadth of Christ’s ministry overwhelming his followers and leaving them with practices only partially reflecting his own.

Healing through the centuries is examined with a two-fold emphasis: the belief that the ideal healing model of Jesus (outlined in ch. 1) is sufficiently boundless to have engendered a number of models and a constant eye to the question of verification. Three critieria suggested by Latourelle are cited approvingly: there should be (1) solid historical proof of (2) unusual events, beyond medicinal science to explain, in (3) a setting of prayer and holiness.

Six different models of healing are offered which, it is claimed, comprehensively represent the historical practices, i.e. the narrow focus, of the orthodox Church. Each is explained by a—more or less—critical discussion of a number of its practitioners, but Kydd notes that they are not exclusive, often overlapping in practice. The models are Confrontational (Early Church; J.C. Blumhardt; J. Wimber), Intercessory (Saints on High; Brother Andre; Mary of Mejugorje), Reliquarial (Bones St Medard), Incubational, (Mannedorf; Morija), Revelational (William Branham; Kathryn Kuhlman), and Soteriological (Oral Roberts). All are acceptable because each has resulted in verifiable healings and can find justification in the ministry of Jesus. Kydd argues that divine healing has not only taken place throughout history, but is also taking place today. But since divine healing occurs in numerous settings he rejects the concept of a ‘stereotypical’ healer and further argues that an ability to heal is no sign of doctrinal orthodoxy. Ultimately, he concludes that healing is a mystery rooted in the grace of God.

The culmination of over thirty years of personal wrestling with divine healing by a Pentecostal scholar, this is a remarkable book. Rarely does one find a sensitive appreciation of healing traditions as far apart as the veneration of relics and the meetings of Kathryn Kuhlman. The author has also travelled extensively in connection with those he describes, providing an immediacy which alone makes the book required reading.

But many critical questions go unanswered. How exactly do the models relate to the ideal model of Jesus? Is their partiality simply inevitable, the result of human frailty? And although Kydd’s historical study necessarily reflects the narrow, what is the significance of the wider aspects of healing in Jesus’s ministry for Christians? Equally the relationships between the models are not developed in terms of their own polemic. Is it satisfactory to simply suggest, as Kydd does, that attitudes to reliqarial healing will be decided by personal theology when he himself is convinced of their efficacy? Healing may be no sign of doctrinal correctness but at what point does doctrinal incorrectness call into question the orthodoxy of the healer and the source of the healing? Are Branham’s well-known heterodox teachings totally irrelevant here?

In conclusion, Kydd has succeeded in gathering significant historical information on the models he outlines, but the task of processing the material into a suitable form for critical Christian reflection remains.