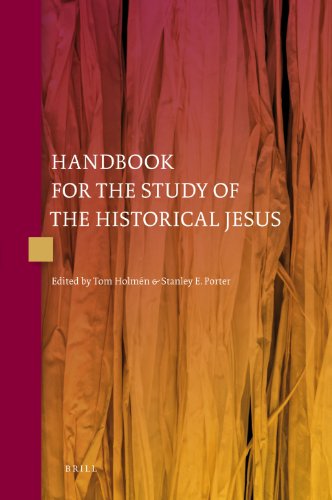 Handbook for the Study of the Historical Jesus

The third quest of the historical Jesus is entering its fourth decade, even as some are calling for a fourth quest that takes the Gospel of John much more seriously as containing historical information. Before the landscape shifts too dramatically, wouldn’t it be great to have a detailed, comprehensive “all-star” cast of third-questers contribute to an anthology of historical Jesus studies so that we can stock of our gains and assess the status questionis? This is exactly what Holmén from Helsinki University in Finland and Porter from McMaster Divinity College in Canada have assembled in this wide ranging collection of essays.

Allison prefers “recurrent attestation” to the traditional criteria of authenticity, Charlesworth argues for dissimilarity and embarrassment as the most important two for determining Jesus’ own theology, while Meier continues to defend an eclectic combination of primary and secondary criteria. Chilton focuses more on divergent traditions in early Christianity that nevertheless converge on Jesus as Jewish merkabah mystic, Dunn stresses that all we have is “Jesus remembered” and highlights the flexible performances within fixed limits of the original oral tradition, while Kloppenborg continues to hope (unrealistically) for a consensus surrounding the early, independent nature of the Gospel of Thomas. Porter lobbies for his three criteria of Greek language (textual variance, discourse features, and Greek linguistic context), Riesner stresses the importance of memorization in oral tradition, and Schüssler Fiorenza values only those reconstructions of Jesus that serve a liberating, pro-women position. Theissen ably digests his case for the plausibility criterion, Hultgren reminds us of what was most of value about form criticism, Malina emphasizes the need for social-scientific exegesis, and Struthers Malbon points to the potential for the new literary criticisms contributing to the quest in ways they thus far have not.

Volume 2 turns to The Study of Jesus, focusing on the ongoing quest, with issues both central and adjacent to it. A sampling of highlights include Colin Brown’s contrasts of the quests of the unhistorical Jesus (Christology from above) and of the historical Jesus (Christology from below), Bengt Holmberg’s prophecies that “the gospels will be seen as generally trustworthy evidence of Jesus” and that “Jesus research will use a more holistic method” (p. 891) and Scot McKnight’s demolition of thoroughgoing forms of postmodernism. Teresa Okure discusses the “living” historical Jesus, the Jesus who actually transforms lives for the better especially in the Majority World, which ironically for the liberationists and feminists is far more often the evangelical and charismatic Jesus than theirs. Sven-Olav Back follows Hengel’s approach to show that no non-messianic Jesus ever emerges, no matter how many layers one strips away from the Gospel traditions, reminding us of the little-remembered fact that W. Wrede moved in this direction near the end of his scholarly career as well. F. G. Downing argues again for a Cynic Jesus, S. Moyise for a Jesus who drank deeply from the wells of Israel’s Scriptures, and M. Bird for one who pushed the boundaries of Judaism sufficient to be crucified. C. A. Evans explores Jesus as prophet, sage, healer, messiah, and martyr; H.-W. Kuhn updates the discussion on Jesus in light of Qumran (in the only chapter in the four volumes originally written in German but not translated into English); and J. Collins cautiously defends a Danielic Son of man behind Jesus’ probably authentic self-references. C. Fletcher-Louis deals nicely with Jewish apocalyptic, L. T. Johnson with anti-Judaism, S. Mason with Josephus, and D. Instone-Brewer with rabbinic writings.

Volume 3 comes finally to The Historical Jesus himself, though the first two volumes have scarcely been without vigorous advocates for different perspectives on the topic as well as surveys of a variety of other approaches. Indeed, it is often unclear why certain contributions appeared in one volume rather than another. The bulk of the essays in this volume are not summaries of the full-orbed portraits of Jesus of an E. P. Sanders, M. Borg, or B. Witherington (or many others), as one might have supposed. Instead they focus on the historical Jesus of a certain strand of Gospel tradition—Mark, Q, M and L, Luke-Acts, John, Paul, Thomas, and so on. Then they survey, in equally discrete chapters, key aspects of Jesus’ life and ministry—historical context, chronology, birth, death, resurrection, self-understanding, miracles, parables, and the like. Finally, and equally topically, they deal in turn with “Jesus and the Legacy of Israel”—including the Sabbath, Temple, Shema, Law, land, sinners, and so forth. Several of these essays helpfully highlight Jesus’ revolutionary attitude to impurity laws—it is holiness more than uncleanness that is “contagious.” Several also stress the “Christification” of key Jewish rituals in Jesus’ thought, a welcome break from the unrelenting trend within major strands of the third quest to make Jesus nothing but a misunderstood Torahcentric Jew.

The final volume, subtitled simply Individual Studies, is the most amorphous and potentially dispensable of the lot. The editors nevertheless insist that all the essays are necessary because some of them will become “classics,” but one can’t predict in advance which ones. Quite frankly, while I could agree with that assessment about the spectrum of studies in each of the first three volumes, nothing in volume 4 struck me as potentially receiving that acclaim. The best are Peter Balla’s “Did Jesus Break the Fifth (Fourth) Commandment?”, H.-W. Kuhn’s, “Did Jesus Stay at Bethsaida?”, Graham Twelftree’s “Jesus and the Synagogue,” Heinz Giesen’s “Poverty and Wealth in Jesus and the Jesus Tradition,” Rainer Riesner’s “The Question of the Baptists’ [sic] Disciples on Fasting,” Tom Thatcher’s “Riddles, Wit, and Wisdom,” and Armand Puig i Tàrrech’s “Why Was Jesus Not Born in Nazareth?” Volume 4 closes with 183 pages of meticulously compiled indexes of ancient sources and modern authors.

Many of these essays appear to have been written quite a while ago, several explicitly in the mid-2000s. It is a pity they are seeing the light of day only now. Thus, for example, it would have been good for Joanna Dewey not to have to rely solely on Theodore Weeden’s unpublished critique of Kenneth Bailey in harshly condemning Bailey’s model of informal, controlled oral tradition, but to see it in published form along with an equally vigorous rebuttal of Weeden by James Dunn in a 2009 fascicle of the Journal for the Study of the Historical Jesus.

In a collection of this size, there will inevitably be gaffes: John Nolland refers to the study of “B[arbara]. E. Reid” as “his” (p. 1913), Wolfgang Stegemann includes “well-off craftsmen” among “lower-class groups” in his pyramid of socio-economic strata in first-century Israel (p. 2307), and Charles Hedrick claims that no one has proposed a plausible explanation of the sequence of logia in Thomas but betrays no awareness of the numerous works of Nicholas Perrin, beginning in 2003 (and he does cite more recent scholarship than that).

Because the editors have commendably included such a wide range of scholars, perspectives on the same or similar topics will vary widely (e.g., R. T. France on the birth of Jesus vs. P. Perkins on his resurrection or M. Goulder vs. C. Tuckett on the existence of Q, of many that could be noted). Far more evangelical scholars are included than one normally finds in international, ecumenical overviews of this kind, and far more liberal scholars are included than one normally finds in anthologies edited by evangelicals, both of which are welcome features.

I have two final laments about these four volumes, one minor and the other enormous. First, if Porter wanted to illustrate what linguists call the etymological fallacy, he could scarcely have found a better example than the title of this collection. But surely “handbook” still often enough refers to something that one can hold in one hand as a primer to a topic that nearly 3,000 pages spread over four volumes should be called something else (“encyclopedia” or at least “dictionary” comes to mind). Second, it is unconscionable for Brill to charge over $1,300 or roughly ₤900 for this work. Only the very best endowed of academic libraries will ever own it, and it will tragically become the finest anthology of biblical scholarship never read!