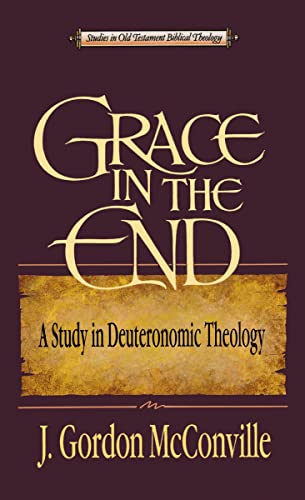 Grace in the End. A Study in Deuteronomic Theology Studies in Old Testament Biblical Theology

McConville examines the history of Deuteronomic studies and the impact of Deuteronomic theology on the theology on the Deuteronomic history (Joshua, Judges, 1 and 2 Samuel, 1 and 2 Kings) and the New Testament. He observes the tendency to locate the book either in a north Israelite origin or in a south Jerusalem context. In the former situation, it becomes a prophetic critique against established religion. In the latter case, it is a conservative argument for the centralisation of cult and worship in Jerusalem. McConville argues that the controversy between northern and southern origins for the book dissolves when it is set in a context before the Monarchy. The supposed conflict between law and grace also disappears when the reader understands the priority of God’s promises throughout. Although the critique is prophetic in aspects, its polemic against Canaanite religion does not resemble that of the prophets of the Monarchy. It is not a distortion of true worship but a worship of other deities that preoccupies Deuteronomy. McConville accepts the close formal similarities of Deuteronomy with second millennium bc treaties and legal collections. He argues that the internal arguments do not compel a late date for the work.

McConville examines each of the books of the Deuteronomistic history in the light of recent discussion. For example, Webb and Klein have demonstrated the literary unity of Judges. Judges 18:31 describes the erection of a shrine in competition with the central sanctuary at Shiloh (Jo. 18:1). It symbolises the loosening of Israel’s hold on the land, as seen throughout this book. Referring to recent literary studies of the books of Samuel, McConville emphasises the ambiguity of the kingship as something the people demand but do not receive as they had expected, and the role of the ‘appendix’ (2 Sa. 21–24) to liken the failure of David to that of Saul and to question whether the promise to David (2 Sa. 7) can provide a permanent blessing for Israel. Deuteronomy influences 1 and 2 Kings in its critique of the monarchy (Deut. 17). For McConville, these historical texts play out the drama in deliberate ambiguities, in which kings rebel against the authority of the divine law. Even in figures such as Hezekiah and Josiah, the text anticipates the ultimate failure of their reforms in the prophetic judgments that accompany their reforms. The warnings of Deuteronomy (8:10–20) lead to the exile as a precondition for a secure relationship between God and his people (30:1–10).

McConville observes how God’s sovereignty and freedom limit the powers of Israel’s kings and priests. Crucial to the election of the people and their covenant relationship with God are the requirements of the law. Yet, their inability to fulfill the demands of the law frustrates the full realisation of the covenant. Thus God’s command to ‘Circumcise your hearts’ (10:16) becomes the promise that he will circumcise the hearts of Israel (30:6).

Finally, McConville applies the work of Deuteronomy to New Testament ethical (slavery and wealth) and theological (‘life’, covenant, heart response) concerns. The result is a useful summary of recent scholarship on Deuteronomic theology and the Deuteronomic History, as well as an appreciation of the primary theological themes found in these texts.