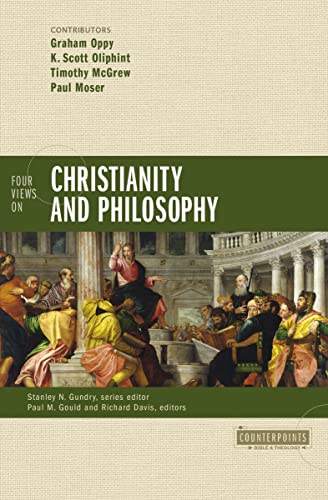 Four Views on Christianity and Philosophy

The Church father Tertullian once asked, “What does Jerusalem have to do with Athens?” Christian philosophers Paul M. Gould and Richard Brian Davis have attempted to provide some contrasting answers to that question in their newly edited Four Views on Christianity and Philosophy, the latest addition in Zondervan’s popular Counterpoints series. In the following I will briefly overview each of the four views, giving some critique along the way, and then give some overall thoughts on the book.

The first view of the book is called the conflict model of Christianity and philosophy. It is presented and defended by atheist philosopher Graham Oppy. Unlike many atheist popularizers, like Richard Dawkins or the late Christopher Hitchens, Oppy’s work treats questions related to philosophy of religion as legitimate and serious. Yet, his conflict model basically claims that philosophy (or better, metaphysical naturalism) “trumps Christianity” (p. 21). Oppy’s essay is interesting and scholarly. One of the strengths of his chapter is his discussion of what is involved in theory or worldview assessment and revision. Overall, I think Oppy makes an attempt at being fairly evenhanded.

That being said, and as Oppy admits, his essay is hardly persuasive. If you’re familiar with serious philosophical arguments against Christianity, Oppy does not say anything incredibly new here. And his three responders all bring up a similar critique against him, namely, that Oppy is not as neutral as he claims.

The other three views of the book take a more positive view of Christianity in relation to philosophy. And though there is much agreement between these latter three views, the contrasts between them bring up some very interesting differences.

The second view within the book is named the covenant model, presented and defended by K. Scott Oliphint. He argues that there is a “theological necessity of any philosophical activity that aims at truth” (p. 72). In short, Oliphint’s view represents the classic presuppositionalist perspective. For those skeptical of philosophy being mixed with Christianity, I think there is much here that will be appreciated.

However, I often found myself confused by Oliphint’s claims and intellectual moves. I rarely disagreed with him, at least directly, but it was sometimes not clear to me how he came to his claims. The other contributors’ responses brought up similar concerns. I think Oliphint’s essay was most helpful in thinking about philosophy from a deeply rooted biblical standpoint.

The third view is called the confirmation model, presented and defended by one of my former professors and mentors Timothy McGrew. McGrew claims that in his view “philosophy confirms Christianity, and Christianity completes philosophy” (p. 124). His view represents the classic evidentialist or natural theology perspective. For those familiar with the usual debates between presuppositionalists and evidentialists, the contours of the disagreements brought up between Oliphint and McGrew here will come as no surprise. But McGrew’s presentation is, in my view, very biblically minded and very persuasive.

However, I did have some questions about this view that I don’t think McGrew adequately addressed. And, sometimes, I thought that the Oliphint and McGrew exchanges were simply “talking past” each other—not really addressing what the other was saying. But I think that those readers who might be more attracted to Oliphint’s covenant model should definitely see, at the very least, the merit of the confirmation model as a polemical tool for Christianity.

The fourth and final model is called the conformation model, presented and defended by philosopher Paul Moser. Of the four views in the book, this was the one that I was least familiar with, and I had the hardest time associating it with any prior touchstone in my mind. Perhaps Pascal? Moser “contends that wisdom and philosophy benefit Christian faith only when they are conformed to the lordship of God in Christ” (p. 176). I am not sure what Christian would disagree with that, but it seems that Moser is fairly radical in his interpretation of this claim.

My main concern with this view was that it was never clear to me that Moser made any distinction between the roles of evidence for Christians versus for non-believers. His comments and biblical references seemed to me to blur the two together. For example, to reference Romans 8:15 (“we cry ‘Abba! Father!’”) as an example of why “No intervening argument is needed” (p. 189) seems, at best, muddled. Though intriguing in many ways, there was much about this view that I did not quite understand.

Overall, this is an excellent volume giving a very good overview on many important issues in trying to think about what relationship should exist between Christianity and philosophy. Gould and Davis’s introduction and conclusion were also very good in this respect. For anyone who is initially trying to think about the relationship between Christianity and philosophy, I highly recommend this book. It is much clearer and more informative than other recent and similar introductory treatments.

However, as most any good introduction will be guilty of, I found the brevity of these chapters and their responses to be at times highly frustrating. At best, each contributor could only briefly introduce their perspective and bring up a few issues somewhat fleetingly. For example, one of the things that I think hurt Oppy’s presentation is that he brings up multiple overly brief criticisms against Christianity. After a couple of these cursory paragraphs, you just feel like you’re being given an index of poor arguments. But, if he had been allowed more space, I believe Oppy’s criticisms probably would have been much richer. I think it would have served his presentation perhaps only to focus upon one or two criticisms in a fuller way.

Similarly, I would love to have seen the interaction between the various views expanded. For example, as I claimed earlier, I think Oliphint and McGrew’s discussion often “talked past” each other, especially Oliphint’s responses. If both had had more space to work with, I think some of these issues may have been more profitably clarified. However, such is the nature of introductory books.

As I see it, this book has broad importance because of its far-reaching implications for Christianity. Not only does Gould and Davis’s book address the question of how Christianity and philosophy should relate, I think the discussions here can generalize to how Christianity should relate to anything outside of special revelation. Thus, for any Christian interested in how the Christian faith should be conceived in relation to anything outside of the Bible (especially philosophy), I think this book serves as an excellent starting place. As such, this would be an exceptional introductory book for both college and seminary students. For those with more background in these issues, I think they would share my discontent at the brevity of the things touched upon here.