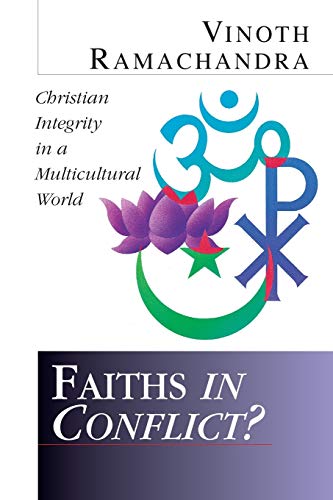 Faiths in Conflict? Christian Integrity in a Multicultural World

In this work Vinoth Ramachandra surveys the various results of religions engaging one another whether in mission or in political dialogue. Always noticeable in his writing is a breadth of understanding. He does not write as if all important issues are defined by their significance to the western world. Rather, he draws upon a global grasp of multiculturalism. The book is a published form of lectures given in 1998 at the School of Oriental and African Studies in London.

In chapter 1 he discusses the simplistic distinction sometimes made between the Islamic world and the ‘Christian’ west. This unhelpful and false framework has given rise to insensitive responses to Islam and naīve treatments of Christianity. Chapter 2 turns to the situation in India. It is a nation where democratic institutions do not always sit comfortably with ancient religious traditions. Ramachandra provides an illuminating account of how modern India was created and the unresolved tensions that remain within its national constitution.

Chapter 3 explores the catalyst for Christianity in the life, death and resurrection of Jesus. There is a detailed and wide-ranging statement of the uniqueness of Jesus. Ramachandra acknowledges that any accurate statement of the identity and purpose of Jesus is bound to generate some form of social conflict. The only questions that matter are whether such conflict is necessarily wrong and whether it needs to lead to any form of violence. The evidence of Christian engagement with other religions is quite able to demonstrate that commitment to the uniqueness of Christ engenders love and understanding. Throughout the book Ramachandra provides a compelling case for the constructive and intelligent engagement that has taken place between Christianity and other religions. There has been a wealth of quality Christian scholarship on Islam contrasted with only a poor treatment of Christianity among Muslims. Christianity has had a major positive impact on Indian culture in its social and political development. Gandhi’s original contributions to Indian thought owe more to the New Testament than to the Bhagavad-Gita. Furthermore, in chapter 4 Ramachandra presents a case for active evangelism as leading to an enrichment of genuine inter-religious encounter. The western pluralist agenda has minimised differences in its quest for a cheap form of tolerance. In contrast, missionaries have sought proper understanding of other religions in all their differences. For example, he notes that many languages have owed their continued existence to the on-going work of Bible translation.

Chapter 5 discusses the important issue of what kind of political framework is best for a multicultural society. He argues against the liberal agenda that attempts to make religion a subjective affair and which creates a new god out our individualism. In contrast, Ramachandra is optimistic that some form of what John Rawls calls an ‘overlapping consensus’ is possible among religions upon which they can create a safe and stable state.

Ramachandra has written an important and timely book. His critique of pluralism and secularism is powerful and effective. However, his book is also a critique of much western Christian theology. He notes the failure of western Christian education to integrate Asian and third world theologians into its discourse. He also identifies the weakness of the moral voice of western Christians in failing to speak out on international, political and moral Issues. The credibility of evangelical opposition to abortion in the west is undermined by its failure to show concern for the 40,000 children who die daily from malnutrition or easily preventable diseases. With Insights like these Ramachandra produces a work that is both academic and prophetic. His description of the current situation is revealing and perceptive. His suggestions for future evangelical engagement are stimulating and plausible.