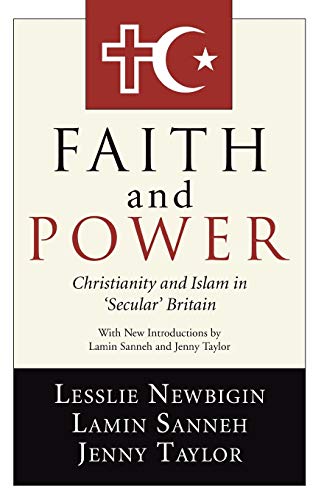 Faith and Power: Christianity and Islam in Secular Britain

This significant study states two key premises at the outset. First, British Muslims have been recently raising issues that British Christians have neglected for too long, and second, Christianity provides the best resolution of these issues.

In part one of this work, Lesslie Newbigin regrets that the British have lost their identity. Multiculturalism, while offering certain clear advantages, poses a number of problems which British society has not yet resolved. Newbigin discusses the rise of secular society, which led to the progressive discarding of religion in the West with accompanying decay. This has resulted in great pessimism in the United Kingdom and specific problems for which secular society has no answer. Newbigin argues that the response to this situation has come from a re-emergence of religion, particularly in the form of religious fundamentalism, of which Muslim fundamentalism is the most prominent and most vocal form.

In the second part, Lamin Sanneh addresses Islam, Christianity and public policy. He points out that Muslim political activity has disrupted the long-standing separation between the state and religion in the West, and he opines that ‘we are faced instead with a Muslim resolve to make Islam count in the public realm’ (28). He points to widespread Muslim dismay at the way that Christians have caved in to secular society on issues such as misuse of the name of Jesus, the adaptation of the Christian scriptures to respond to bandwagon fads, and the acceptance by Christians of a demotion of religion to the private sphere. Sanneh states that ‘Muslims are justified to charge Christians with compromise, if not surrender’ (34).

In Part Three Jenny Taylor addresses what she terms ‘the multicultural myth’. She includes a useful discussion focusing on the great ethnic and theological diversity of Islam, and concludes that ‘Islam is not a seamless whole’ (79).

The force of Taylor’s contribution lies in her critical engagement with grassroots issues. She cites the case of 13 year-old Shazia Shafee, a girl of Pakistani parentage who was withdrawn by her parents from her school in Sheffield for 20 months, without any resulting action being taken by teachers, social workers or the Foreign Office for fear of encroaching across a multicultural divide. As the girl in question was a British citizen, technically her family could have been liable to charges of abduction, denial of the right to education of a minor, possible physical abuse and facilitating underage sex by marrying her off to a peasant cousin in a village in Pakistan. The inaction by authorities, accompanied by an official silence, represents what Taylor refers to as ‘Multiculturalism and the cult of silence’. She goes on to point out how the cult of silence condones ‘almost total cultural separatism—in fact, informal apartheid’ (92).

Taylor discusses integration and assimilation as alternatives to multiculturalism. She points out that Muslim thinkers in Britain are especially opposed to assimilation, considering it a threat to the survival of the Islamic community in the United Kingdom. Taylor calls for ‘a vision of integration that does not threaten people’s need to develop in their own way’ (103). This would prevent the emergence of minority colonies, such as is seen among Asian ghettos in Britain and would serve to forge a sense of common purpose among disparate elements, thus overcoming the problems with present multicultural policies and assimilationist ideologies.

In the final part of this work. Lesslie Newbigin returns to consider the possibility of establishing a Christian society. He provides a set of useful recommendations to the church as to how it can re-engage with the world. He concludes by distinguishing between Christian and Muslim approaches as follows: ‘Christians agree with Muslims that God’s will is to be done in the public no less than the private sphere. The question is: what kind of obedience does God desire?’ (162). Newbigin answers by stating that God desires obedience freely given as an expression of love, not given out of fear of divine punishment. He clearly identifies the former with Christianity and the latter with Islam.

Newbigin writes in a lucid, logical and persuasive manner throughout this work. Likewise, much of Sanneh’s thinking is hard-hitting and incisive, though at times his contribution is somewhat marred by being overly academic and at times stylistically pompous. However the heart and soul of this work lies in Taylor’s contribution, which belies the fact that she is the least known of the authorial trio. No doubt more will be heard from her in the future.

This excellent work deserves close attention and wide publicity. It is directly relevant to social issues relating to Britain and other Western societies where non-Christian minorities are increasing in number. It should be required reading for diverse study, programmes and interest groups.