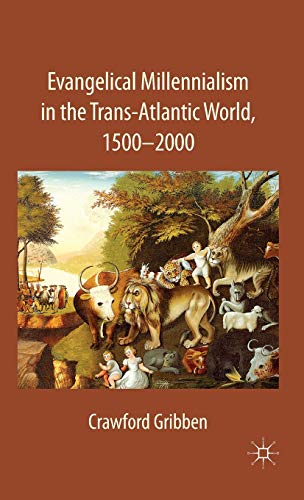 Evangelical Millennialism in the Trans-Atlantic World, 1500-2000

Crawford Gribben has written numerous books on a range of topics including but not limited to early modern religious cultures, Reformation literature, Irish Puritans, and multiple volumes and articles dealing with Protestant and evangelical millennialism. Evangelical Millennialism in the Trans-Atlantic World, 1500-2000 is Gribben’s new attempt to explore what the publisher calls “the first complete overview of the intellectual history of one of the most significant contemporary cultural trends.” In many ways this book complements his previous works, in particular, Writing the Rapture: Prophecy Fiction in Evangelical America. The latter takes into account Gribben’s expertise in early modern print-culture, primarily by describing the emergence and development of the prophecy-fiction genre; this work, however, adds an account of the background, development, and prospective of evangelical millennialism.

Each chapter attempts to accomplish multiple goals that work together towards the development and future influence of millennial ideas. First, the book takes into account a broad historical definition of evangelical believers that includes people such as the sixteenth-century reformers and contemporary fundamentalist and neo-evangelicals. Second, Gribben seeks to give an account of the changing eschatological commitments and competing formulations of ideas by surveying print-culture. However, the goal is not an overall description of eschatology but focuses only on millennial interests. Third, the author discusses the divergence and the developed ideals between European and North American evangelicals, arguing, “the differences have always been as significant as the similarities in eschatological thinking represented in trans-Atlantic evangelical print culture” (p. 16). In addition, he tries to measure patterns of success of different paradigms and explain the divergent evolutionary process of ideas on both sides of the Atlantic. Lastly, this book is very fixed and clear in its goal. Gribben purposefully avoids questions of ecclesiology, psychology, and sociology to “highlight the importance of varieties of millennialism as frequently-repeated themes and as highly flexible discourses within which believers have expressed some of the salient hopes and concerns of their evolving worldviews” (p. 19). He does this by chronologically illustrating the major themes and texts through their historical contexts.

After a very important and at times dense introduction of key terms, method, and context, the overall structure of the book is a five-hundred-year chronology dividing the progression of ideas into chapters exploring the emergence, formation, consolidation, expansion, contest, and dominance of evangelical millennialism. The first chapter looks into the changing theological patterns and the surfacing of millennial desires in the seventeenth century. In particular, this chapter tries to show how many found it difficult to reconcile a traditional rejection of a future millennium with the future conversion of the Jews.

Chapter 2 explores the influence and emergence of the “science of order” and a continuing mathematical revolution on new paradigms from 1600 to 1660, specifically of the English and American Puritans and the hope for an earthly millennium. Chapter 3 focuses on the gradual transformation of millennial thinking between 1660 and 1789. While many did not agree on the timing of the millennium, the reality of the age became increasingly well liked. Gribben focuses on the impact of the early systems of religious print and the spreading of millennial views of people such as Jonathon Edwards and Charles Wesley in comparison to the interpretations of others such as John Gill.

Chapter 4 explains the breakdown of “the traditional historicist method, the spectacular collapse of its chronological project, the widespread abandonment of traditional postmillennialism, and the rise throughout the nineteenth century of a new variety of futurist premillennial faith” (p. 73). Gribben studies the impact of negative social events such as the American civil war, the increasing attractiveness of dispensational premillennialism, and its proponents such as John Nelson Darby.

Chapter 5 studies the conservative evangelical retreat from culture in the 1930s and 1940s and then the revival of social and political engagement towards the end of the century. This chapter discusses the growth of paradigms such as premillennial dispensationalism, Protestant fundamentalism, and the influence of new political ideologies such as Zionism.

Gribben starts the final chapter by writing, “Evangelicalism in its modern guise, and especially in North America, is very much a creation of the 1970’s” (p. 110). His final chapter is an exploration of modern evangelical millennialism and the difference between the evangelical identity in America and Europe. In addition, it explores the growing dominance of premillennial dispensationalism in current literature and the popular understanding that it is representative of all Christian eschatology.

While Gribben successfully shows the advance of ideas in the context of each period, his work is far from a “complete overview.” While he does give a surprisingly thick description of millennial history in such a short volume, his discussion assumes that the reader knows the individuals to whom he is referring and that they represent the best examples for the thinking and publishing of their time. In addition, he fails to explain why he highlights some people and chooses to ignore others. For example, chapter 5 mentions William Blackstone and the million copies of his book Jesus Is Coming (p. 95), but fails to mention A. B. Simpson, someone with whom Blackstone worked closely. Simpson published pamphlets, magazines, and books that had a huge impact on the spread of millennial ideas, not to mention the founding of three colleges and a denomination.

With this said, his overall thesis seems to prove true, as he shows how certain millennial ideas slowly worked their way into society and ultimately become the predominate understanding of modern popular culture. This book is useful to anyone who is interested in the history, the context of millennialism, and the impact of print-culture on the social milieu of both Western Europe and North America. It would be an interesting volume for a number of classes including sociology and eschatology. While it is not meant to be a theological analysis, this work can be useful to theology courses by showing how literature can influence and perhaps manipulate denominational doctrines that already tend to be theologically speculative. It is a very creative way to approach a long duration of time and get into the minds of those who developed precise millennial worldviews that ultimately diverged and influenced the entire world.