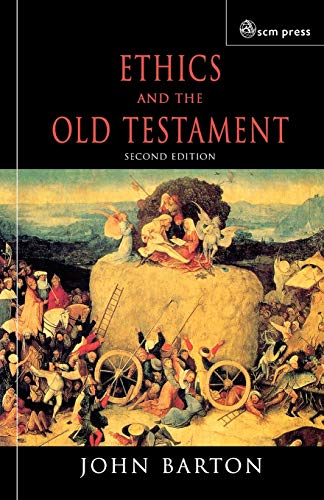 Ethics and the Old Testament

The five chapters of this slim book began life as lectures to a non-specialist audience and reach print without needing to display their learning in footnotes. They are a model of lucid writing that leads readers through the material without patronising them. Overall, Barton, Professor of Interpretation of Holy Scripture at Oxford, offers us good reasons for reading and reflecting on the OT as we ponder what it means to be human. There is a cogency to Barton because he anticipates the difficulties that the culturally embedded quality of the OT generates, and the plurality of voices and perspectives that emerge within the spectrum of its canonical writings. Those who adhere to the King James version, to a theonomist or reconstructionist attachment to death penalties, or to a Barthian emphasis on divine command and declaration will not find Barton as enjoyable a read as did the reviewer.

In clearing the ground in the first chapter on ‘The Vitality of Old Testament Ethics’, Barton uses phrases like ‘categories of thought which are alien to modern thinking’ and ‘internal inconsistencies’. He admits as obvious the patriarchal colouring, even in the Ten Commandments which address ‘the free adult male Israelite’. These are noted as givens which do not detain Barton for long because he is more impressed by ‘a unified vision of how to live well’ that is conveyed ‘through the particular and the specific’, rather than by treatise. Like Martha Nussbaum’s enthusiasm for Aristotle’s particularity and practical insight, Barton champions the rootedness and specificness of Israel’s ethics.

In chapter 2, on ‘Ethics and Story’, Barton uses the Nathan, David and Bathsheba story to illustrate the way the OT involves the reader, or rather the way the story works on us ‘to illuminate the darker reaches of our own corrupt nature’. He finds far more in the story to reflect on than the breaking of specific commandments. A simplified moralistic reading diminishes OT narratives. Their story form demands more of us than identifying the goodies and the baddies, or the correlation with laws in the Pentateuch.

The ‘Three Ethical Issues’ of chapter 3 turn around ecology, sexual morality and property and are chosen for their contemporary relevance. Barton grapples rather well with charges against the OT that it is philistine, fierce and materialist.

The fourth chapter offers a delightfully simplified overview of the Protestant and Catholic starting points in ‘Divine Commands or Natural Law’ as the basis of ethics, and makes a case for the pervasive observation and reflection approach in the OT that has often been tied too tightly to Wisdom literature.

The final chapter ‘Why Should We be Moral?’ examines motivation by taking three time axes attached to motivation clauses. Promise holds out a future reward. Remembering God’s past actions induces gratitude. That leaves the present, where the OT holds out integrity as its own reward.

This book is reader-friendly. For theological students doing OT modules, it is worth reading early on. It is not a substitute for more extensive, weightier exegetical or hermeneutical treatments such as Chris Wright’s Walking in the Ways of the Lord (Apollos, 1995) but it is not meant to be. It will probably provoke—in my view, helpfully. It should also help with communicating the OT to non-specialists.