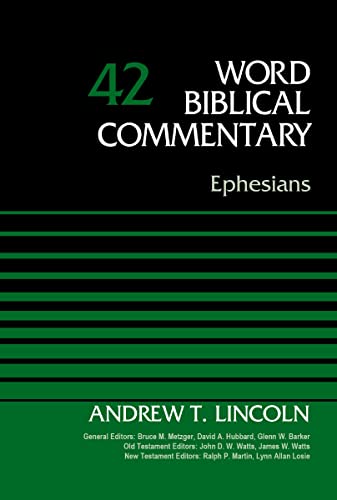 An appreciation for the apostolic foundation (themelios) of the church, and in particular the Pauline tradition, best characterizes the outlook of the author of Ephesians according to Andrew Lincoln. In the first major exegetical commentary on Ephesians since Markus Barth’s massive two-volume work (1974), Lincoln has provided a fresh analysis of the letter that stresses a ‘second-generation’, post-apostolic perspective.

Lincoln parts ways with the evangelical tradition of scholarship on the letter which has commonly regarded it as stemming from the hand of Paul himself—indeed, many have described Ephesians as the jewel of Paul’s letters. He finds the combined weight of the differences of language, style, points of theology, and the apparent later perspective of the letter as irreconcilable with Pauline authorship. Furthermore, he contends that the pseudonymous authorship of Ephesians is betrayed by its heavy borrowing from Colossians as its primary literary source.

For Lincoln, it is the temporal setting of the letter that is decisive for its interpretation. He sees the letter as written by a Jewish-Christian follower of Paul who is using the accepted device of pseudonymity to pass on Pauline tradition to the churches of Hierapolis and Laodicea after the death of the great apostle. Lincoln agrees in large measure with the conclusion of David Meade (Pseudonymity and Canon (Tübingen: Mohr, 1986)) that these Asia Minor churches lacked a sense of cohesion and communal identity because of the loss of Paul as a unifying source of authority. According to Lincoln, the author of Ephesians endeavours to let Paul speak again: ‘Instead of simply saying that he is passing on Pauline traditions, he makes it more personal, direct, and forceful by adopting the device of Paul himself appealing to the churches’ (p. lxxxvii). This becomes the basis for explaining the many autobiographical statements by ‘Paul’ in the letter, particularly in Chapter 3. The first-person statements have the effect of the apostle speaking again to the churches and serve to strengthen the bonds between them and the Pauline tradition. The author is not part of a ‘Pauline school’, but works independently in providing a fresh interpretation of the Pauline gospel.

For the most part, Lincoln sees the Pauline tradition reflected in Ephesians as faithfully preserved in its application to a new setting. For instance, in contrast to many other scholars holding to pseudonymity who detect an eschatology in Ephesians at odds with Paul, Lincoln rightly stresses the futurist eschatology present in Ephesians and explains that the realized eschatology of Ephesians 2 is essentially consistent with Paul. At other points, however, Lincoln finds theological formulations that he feels could not have been made by Paul during his lifetime. Perhaps most significant here is his explanation of Ephesians 4:1–16. He contends that the pseudonymous author is addressing the issue of how the Pauline churches can remain unified and apostolic without the apostle. The answer is to be found in the stress on the significance of the bearers of the Pauline gospel—originally the foundational apostles and prophets, but now the evangelists, pastors, and teachers.

Another distinctive trait of the commentary is Lincoln’s effort to highlight the formal rhetorical dimensions of the writing. Lincoln describes Ephesians as a combination of the epideictic and deliberative rhetorical genres, the former of which sets out to increase the intensity of the adherents to certain values while the latter seeks to persuade the audience to take certain actions. Nevertheless, Lincoln characterizes Ephesians as the written equivalent of a sermon or homily in the form of a letter. His comments here make a fresh contribution to the study of Ephesians.

In addition to the use of Colossians, Lincoln sees the author making use of other traditional materials, viz. the Pauline letters, hymnic and liturgical pieces, credal statements, and a household code (mediated by Colossians). In Ephesians 2:14–16 he detects a hymn that, in its original form, spoke of Christ as the one who provides cosmic peace and reconciliation. He explains that the writer of Ephesians has adapted this hymn to express how Christ has brought the Gentiles near and has overcome the barrier that has separated them from Israel. Lincoln contends that this perspective on the church’s relationship to Israel is different to what Paul expressed in Romans 9–11 where Paul argued that Gentile Christians had been added to a Jewish base and there is a future hope for ethnic Israel. In Ephesians, Lincoln explains, the question of Israel’s privileged position and future has been transcended. Gentiles are joining a new community, ‘a third race’, which is neither Jewish nor Gentile. Lincoln argues that this is a return to the perspective of Galatians with its polemical stress on the discontinuity between the church and Israel (Gal. 3:28; 4:25–27; 6:15–16).

Lincoln’s verse-by-verse exegetical analysis of the letter is extremely rich with insights. He shows an incredible mastery of all the relevant secondary literature, interacting with it throughout the commentary. I found that Lincoln provides many important corrections to much of the recent scholarship on Ephesians (e.g. to A. Lindemann on the realized eschatology of the letter and to C.J. Bjerkelund on the function of the parakalō section in 4:1ff.).

Many evangelical readers will have difficulty, however, with his reflection on the setting and composition of the letter. To my mind, his appeal to pseudonymity as an ancient literary device that would have been recognized and accepted by the early Christians is still unproven (although some evangelical scholars think otherwise). Lincoln’s explanation of the ‘Pauline’ autobiographical statements in Ephesians 3 is strained.

Similarly, Lincoln’s explanation of the letter in terms of post-Pauline temporal setting does not explain some of the difficult passages as well as an earlier setting. For example, his explanation of the purpose of 2:11–22 as teaching Gentile Christians about their roots after the time when Jew-Gentile unity had been achieved is less convincing than postulating an actual situation of disunity among Jews and Gentiles in the churches of western Asia Minor in the middle of the first century. His explanation also suffers from the dubious supposition that the vast majority of church members were Gentile (they were more likely a mixture of Jews and Gentiles given the vast Jewish population of Asia Minor). Granted, Ephesians is more general, less polemical, and ostensibly less situational than the other Paulines. However, Lincoln’s contention that the subject of Ephesians is ‘Christian existence as a whole’ (p. x) is much too vague.

Finally, I remain unconvinced of Lincoln’s view that Ephesians represents a reinterpretation of the Pauline gospel using Colossians as its primary base. He denies that Ephesians could have been written shortly after Colossians by arguing that there is a ‘changed perspective’ at many points, viz. when the author of Ephesians borrows phrases from Colossians his redaction introduces notable changes of perspective. These examples do not prove compelling. In my opinion, it is still conceivable that these points could be explained as an application of the same gospel with similar terminology to the exigencies of a slightly different situation and purpose.