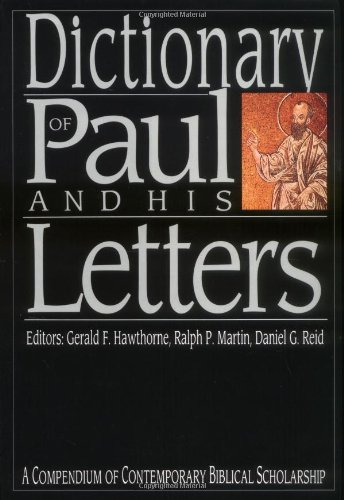 Dictionary of Paul and His Letters

Paulist Press for many years has had a series on theological issues for the layperson with such titles as What Are They Saying About—Creation?, Death?, Dogma?, Grace?, Salvation?, Theological Method?, Similarly, in this dictionary, evangelical scholars who might feel comfortable in the Tyndale Fellowship or Institute for Biblical Research write on ‘What are We Saying About—Paul?’ The hidden audience of the Dictionary of Paul and His Letters is the entrenched liberal higher critical fraternity of scholars and, as one writer wrote, their ‘scholarly debate in recent decades’ (p. 920). Thus, the Dictionary is an up-to-date report from a neo-evangelical scholarly perspective, written cautiously so as not to offend more liberal colleagues. On issues such as homosexuality and critical issues on Paul’s letters, the authors conclude affirming traditional values, yet often do so apologetically. The remnants of a doctoral degree often find their place in the evasive ‘it’ without clear antecedent: ‘it has been argued’, ‘it appears’ (pp. 214–215). The subtitle which appears on the cover, but not on the title page, well describes the Dictionary’s intention: ‘A Compendium of Contemporary Biblical Scholarship.’

The over 200 articles cover concepts, cities, letters, and people which appear in Paul’s letters. They are classified in categories generally those with some training in Paul’s studies would seek: ‘fellowship’ or ‘financial support’, not ‘tithing’, or ‘work’; ‘sexuality’ not ‘immorality’, ‘prostitution’, or ‘fornication’; ‘church order and government’, not ‘morality; ‘God’, not ‘Trinity’; ‘rhetorical criticism’, not ‘style’. However, the Scripture and subject index should help make the transfer. The article index and list of abbreviations are also very helpful. A bibliography for every article is helpful for the student who wants further study.

The 108 writers include at least eight women scholars and scholars from mainly the United States and Great Britain, but also Australia, Canada, Germany, Hong Kong, Kenya, Korea, and New Zealand. I did not notice any Hispanic or African names. The articles on women in ministry are generally positive. I would have hoped since Barnabas and Apollos each had an article, Prisca might have had one too. She and her husband did save Paul’s life. And Junia had only passing mention in the articles on Apostle’ and ‘Paul and His Co-Workers’.

Generally this is not a book replete with original insights into the Bible. However, several articles were very insightful even in their succinct space. C. Kroeger’s article on ‘Head’ has excellent Graeco-Roman material with a thesis. She gives an overview of Paul’s understanding of kephale the classical view of head as source, headship in the household and in the Trinity. She cites many primary references. She concludes by quoting John Chrysostom: ‘only a heretic would understand Paul’s use of “head” to mean “chief” or “authority over” ’ (p. 377). Twelftree’s article on ‘Healing, illness’ is well-balanced, well categorized and accurate. He differentiates suffering from the fallen world from suffering for preaching the gospel from suffering from sin. P. Beasley-Murray’s article on ‘Paul as Pastor’ is an insightful handling of images. He highlights Paul as parent, mother, and father, and, as well, his work as part of a team of colleagues. F.F. Bruce’s ‘Paul in Acts and Letters’ is a good summary of Bruce’s Paul, Apostle of the Heart Set Free.

In summary, the Dictionary of Paul and His Letters is a helpful compendium of evangelical thought on critical scholarship on Paul’s studies, especially for the seminary trained person.