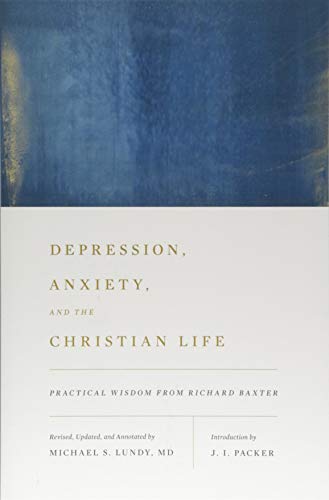 Written by Michael S. Lundy and J. I. Packer Reviewed By Keith Condie
Ethics and Pastoralia

The heart of this book consists of two treatises on depression written in the seventeenth century by the English Puritan pastor, Richard Baxter (1615–1691). These works from Baxter have been revised, updated and annotated by a twenty-first century physician-psychiatrist, Michael Lundy. Which raises a question: why? Why would a contemporary mental health expert want to publicize advice that pre-dates modern psychiatry and is ignorant of the research findings and treatments that are available today? Lundy’s interest is not merely historical; he believes that Baxter’s counsel is apt and profitable for the significant number who continue to struggle with the awful affliction of depression and/or anxiety.

Part 1 of the book introduces the reader to Richard Baxter. First, another Baxter admirer, the pastor-theologian J. I. Packer, offers a succinct overview of the nature of Puritanism, Baxter’s life, and the foci of Baxter’s ministry. Packer highlights that Baxter, like other Puritans, affirmed that fruitful Christian living begins in the mind with thoughtful consideration and engagement with God’s truth, and that all of life was to be lived before God and with eyes fixed on eternal realities. For Packer, Baxter’s willingness to bring the message of God’s grace and love in Christ to those experiencing depression is something that today’s pastors could well adopt.

After Packer’s chapter, Lundy provides a longer introduction that focuses more directly upon Baxter’s methodology in addressing depression as well as offering his own thoughtful reflections on how sin, human responsibility, and suffering should be understood in relation to mental illness. Although the modern-day lifestyle differs markedly from that of the seventeenth century, the nature of psychiatric disorders remains unchanged, and Lundy believes that Baxter offers advice that has stood the test of time. From his medical background, he recognizes the scientific inadequacies that surface in Baxter’s work (such as the humoral theory of medicine). But he also appreciates that “recent” does not imply “best,” and laments the “unhelpful and often unwarranted segregation of body and soul, medical and pastoral, theological and psychological” (p. 36) that permeates much of the mental health field. He appreciates Baxter’s holistic theological anthropology which acknowledges the psychosomatic (soul and body) unity of each individual and the various social and cultural forces that influence behavior. What Lundy finds is a pastor from an earlier generation who draws deeply upon biblically-informed Christian theology and adaptations of Stoic moral philosophy. Baxter uses these insights to produce a forerunner to modern day cognitive-behavior therapy (CBT), while also ensuring “that his readers understand that their problems have somatic as well as emotional and spiritual dimensions” (p. 53).

And this is indeed what emerges in the two Baxter treatises that comprise Part 2 of this work. “Advice to Depressed and Anxious Christians” is a section from his massive pastoral manual, A Christian Directory. The thirty-five possible signs that are listed reveal Baxter’s familiarity with the illness and his acute powers of observation. Symptoms of anxiety, psychosis and obsessive-compulsive disorder are found in the list, as are various impairments in thought, mood, behavior and associated spiritual consequences. Then, after a few brief comments on the causes of melancholy (the seventeenth century term for “depression”), Baxter sets forth his advice in twenty-one directions. Many of these, along the lines of CBT, seek to adjust unhelpful thought patterns and to encourage behaviors that Baxter had found by experience were more likely to lift mood. He cautions against ruminating thoughts, introspective spiritual practices, and withdrawing from the company of others. He encourages productive activity, thoughts of God’s love and grace, and the value of seeking assistance from a physician.

The final chapter is Lundy’s edited and updated version of Baxter’s “The Cure of Melancholy and Overmuch Sorrow, by Faith.” While there is significant overlap with the previous chapter, this more detailed piece has an even stronger emphasis upon the spiritual dimensions that contribute to low mood and its alleviation. Yet the sophistication of Baxter’s approach remains to the fore. For many individuals experiencing “excessive and misguided sorrow and guilt … much of the cause is to be found in physiological disturbances, physical diseases, and general ‘weakness’” (p. 114). For others, Satanic influence, sinful impatience, ignorance of gospel truth, and such like might be at play. For Baxter, relief is best found in thoughts and practices informed and renewed by biblical truth. In particular, he provides thirty-one truths about God’s grace that provide consolation for those of tender conscience whose sadness arises from a sense of spiritual insecurity. This work also provides a number of helpful suggestions of how family and friends might assist someone beset with depression.

es and cultivating a sense of meaning and purpose in life contribute to wellbeing. What this book does is foreground this essential spiritual component of human life, not in a general sense, but by directing the reader to the spiritual truths that arise from biblical Christianity. Baxter doesn’t have all the answers. But we do indeed find wisdom that stands the test of time, and that will assist both those suffering these afflictions and also those who pastor them.