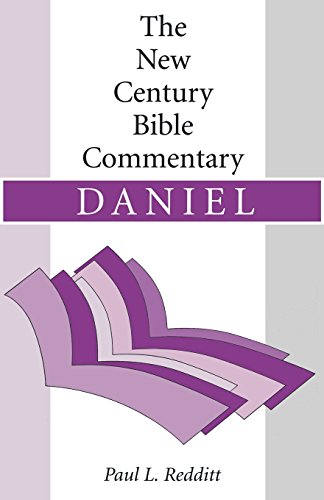 This commentary, by the Professor of Old Testament, Georgetown College, Kentucky, marks the revival of the New Century Bible Commentaries. Apparently the plan is to fill the gaps in the series rather than replace existing volumes.

Redditt provides a fairly full Introduction, dealing with the usual issues of authorship, date, unity, and so on. He takes the standard critical view that the book of Daniel, in its extant form, originates from Judea at the time of the Maccabean crisis.

However, he interacts more fully with the works of scholars who hold to a sixth-century Babylonian origin of the book than do most recent commentators who take this position. Given this openness to those whom he calls ‘traditional scholars’, it is surprising that when discussing one of the most thorny problems of the book, the identity of ‘Darius the Mede’, he does not mention the suggestion of D.J. Wiseman (in Wiseman et al., Notes on … Daniel, London: Tyndale Press, 1965) that the waw in Daniel 6:28 should be read as a waw expticativum, so identifying Darius the Mede as Cyrus the Persian. This is quite acceptable grammatically, and a similar use occurs in Aramaic in Daniel 4:10. This view is supported from a literary stand-point by Colless (JSOT 56, 1982, 113–26), and at present seems the best solution to the problem.

Because he recognises that the stories make most sense in an exilic setting, and that there is continuity between them and the visions, Redditt concludes that the book of Daniel derives from a group of diasporaJews who moved from Babylon to Jerusalem after Antiochus III gained control of Palestine. He regards Jerusalem as the final provenance of the book because of the interest in the fate of the city and its temple shown in the visions. However, there is no reason why Babylonian Jews should not have had such an interest, as Psalm 137 and Nehemiah 1 show. A strong argument can be made for a Babylonian provenance for the visions as well as the stories (cf. Lucas, ‘Daniel: Resolving the Enigma’, VT 50, 2000, 66–80).

The commentary proper proceeds chapter by chapter, except for 10:1–12:4 and 12:5–13. Each chapter has an introduction and is then divided into sections, with general and verse-by-verse comment. There is helpful and usually judicious discussion of the views of a range of scholars, including ‘traditional’ ones, before Redditt gives his own conclusions. He has his own theory of a three-stage redaction, presented in the Introduction. This intrudes in several places in the commentary, without really providing much exegetical illumination. The commentary is rather weak in the area of recognising literary structure and artistry. The discussion of Daniel 10:21–11:45 provides an example of how these two features of the commentary sometimes interact unhelpfully. A concern to uncover possible redactional stages in the production of this survey of history seems to blind Redditt to the ‘patterning’ that exists in it so that the careers of earlier rulers foreshadow that of Antiochus IV, and provide support for the prophecy of his sudden downfall.

A new feature for the series is a concluding comment on the theology of each chapter. Here there is helpful material for the preacher and teacher, and it is a pity that the comments are quite brief. This is a helpful commentary, written from a moderate critical standpoint, for students and pastors who want a not-too-detailed, yet quite substantial way in to the study of the book of Daniel. It is a good bridge to the more technical commentaries by Goldingay (Word) and Collins (Hermeneia).