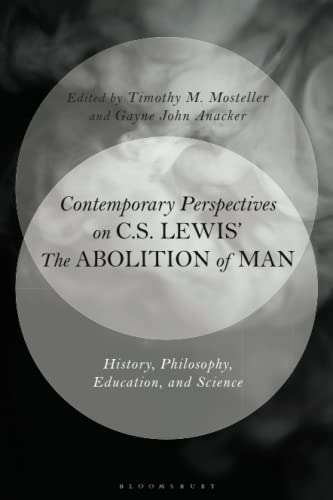 C. S. Lewis’s The Abolition of Man has been described as perhaps the best place to begin in understanding the main thrust of his public work. The book is an adaption of a series of lectures Lewis gave at the University of Durham during World War II. The topic of those lectures was modern education. However, the lectures serve as a significant critique of the trends in linguistics in the early Twentieth century, an argument against the rejection of a traditional anthropology, and an apology for natural law. That Lewis successfully accomplished all three of those tasks in about one hundred pages, including the appendix, is nothing less than amazing. It is little wonder, therefore, that in 1999 The Abolition of Man came in at number seven in National Review’s top 100 non-fiction books of the century (https://www.nationalreview.com/1999/05/non-fiction-100/). It is also not surprising that the book continues to be discussed in diverse audiences today.

A recent multi-authored volume, Contemporary Perspectives on C. S. Lewis’ The Abolition of Man: History, Philosophy, Education, and Science, offers a collection of essays considering the critique Lewis offered with respect to the current state of various disciplines. After a concise introduction from the editors, the book deals with The Abolition of Man in nine chapters (hereafter Abolition). In chapter 1, Adam Pesler offers an overview of Lewis’s thesis and considers the importance of his argument for the place of emotions in moral reasoning and against subjectivism in philosophy in general. The second chapter, by Micah Watson, delves into the defense of natural law in Abolition, including ways that natural law can be misused or corrupted.

In chapter 3, Mark Pike explores how contemporary education might look different if Lewis’s advice in Abolition was taken seriously, in particular with regard to providing moral education to children. In the fourth chapter, Charlie Starr develops Lewis’s ideas into an application for teaching English to students in a world that largely embodies the failures Lewis was attempting to resist in Abolition. Francis Beckwith evaluates whether Abolition can rightly be called a conservative book in chapter 5, concluding that it supports a conservativism that values the good, the true and the beautiful but not, perhaps, a conservativism that is primarily about libertarian economics.

In the sixth chapter, Judith Wolfe places Lewis’s thinking in Abolition alongside his expression of “mere Christianity” to show the continuity between his philosophical and theological thinking. Chapter 7, by David Ussery, contains a more personal essay reflecting on the impact of Abolition on a scientist. In the eighth chapter, James Herrick looks at the context in which Lewis was writing, giving background to contemporary readers on the subjectivist philosophers whose ideas Lewis was seeking to combat. Finally, in chapter 9, Scott Key shows the ways in which Lewis developed his critique in Abolition in his fictional work, That Hideous Strength.

Contemporary Perspective on C. S. Lewis’ The Abolition of Man is a helpful treatment of a central book in “Lewisiana.” (In fact, Walter Hooper, the longtime editor of Lewis’s writings, has argued that Abolition should be read first among Lewis’s many works.) Readers of this volume will be unable to escape the ways that Lewis’s prophetic predictions have come to pass, often with remarkable accuracy. It stands to reason, then, that his proposed remedies would be beneficial, or at least worthy of consideration given his uncanny understanding of the trajectory of modern society.

This book offers a unique perspective on Abolition: it is a collection of essays about education by educators in response to a theory about education. While the essays tend to be academic in tone, there is obvious personal wisdom under the surface of their arguments. That many of the contributors are well-known scholars in their respective fields also contributes to its value. This book would make an excellent volume for an interdisciplinary discussion group among faculty in a university setting. Or, it could be useful as a supplementary course text in a class on educational theory at a Christian university.

As a new volume in the perpetually expanding field of C. S. Lewis studies, this book adds depth to the discussions of Abolition. The contributors have offered well-researched, cogent essays that deal carefully with the text. One weakness of the volume is the amount of repetition between many of the essays. Even given the brevity of the book under discussion and the diversity of the fields of the authors, the volume could have been better constructed to minimize the amount of time summarizing Lewis’s arguments in Abolition at the beginning of each chapter. That approach would have been challenging for the editors but would have improved the end product. Despite this opportunity for improvement, the volume remains a valuable one.

One of the greatest strengths of this volume is that it presents a critique of modern thought without devolving into apocalyptic ranting. Much like Lewis’s own tenor during his prolific public writing career, the contributors of this volume are perfectly clear that there is something wrong, but they offer a constructive solution rather than merely urging a boycott or breaking out the pitchforks. This volume represents the best attributes of public discourse: clarity in logic, consistency in focus, and forcefulness in advocating a solution. It would make a worthy addition to the libraries of educators in particular, as well as benefitting anyone interested in Lewis’s non-fiction work. It should certainly find its way into institutional and personal libraries as a helpful resource in understanding The Abolition of Man.