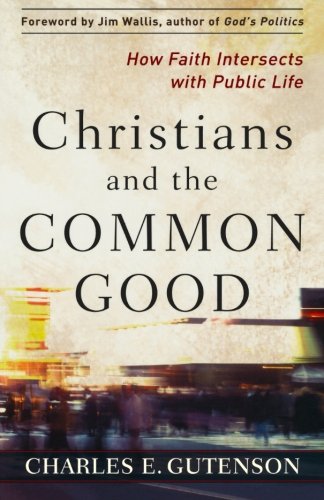 Christians and the Common Good: How Faith Intersects with Public Life

In this popular-level work, Gutenson constructs a biblical account concerning Christian thinking about public policy that aims at the “common good.” Although this work follows the vein of Jim Wallis’s God’s Politics (HarperSanFrancisco, 2005), it differs by dedicating almost two-thirds of the book to scriptural interpretation. Gutenson’s exegesis surveys the “biblical vignettes” informing our political thinking. The conclusions could be summarized in five statements:

This is an intensely fascinating book. The concluding chapter (ch. 6) will be controversial for many, and his method of employing his exegetical gleanings equally so. But Christians, especially American Christians, must not neglect the core message of this text. This last caveat also forms the basis for one initial critique: its possibly misleading title. The problem of appealing to the reader as “Christians” is initially begged when considering Gutenson’s “we” and “they” usage throughout the text. The reader suspects that the author has a narrower group of people in mind beyond Christianity writ large. As the book progresses, the reader suspects that the “we” is best pictured as a white Protestant (probably Wesleyan) male Baby-Boomer American who shares substantial presumptions with the author about social contract theory and the need for natural law/theology. This is a tall order for the average reader, especially undergraduate readers (the so-called Millennials) who are desperate for guidance on issues of political and religious integration. Correspondingly, a subtle demonization of the “they” persists, who are often pictured as “wealthy, powerful” people (p. 146) who live in a world where “profits soar” (p. 159). Or, Gutenson talks about “they” as his fundamentalists forefathers who sold “us” on the idea that Christianity was entirely concerned with individual salvation.

Gutenson is unrelenting in presenting a text that follows the trope of ethico-political responsibility throughout the Protestant canon. Whenever the reader is tempted to quibble with a lesser point, the author returns to his central reiteration from the Scriptures: “The particularly vulnerable condition of the poor makes them a group to which God seems especially attentive” (p. 89). While it feels like Gutenson is clubbing the reader with this detail, he effectively demonstrates that the Scriptures themselves club God’s people for their neglect of the poor and oppression by means of public policy.

Although I offer a few more points of critique below, these could easily double as substantive discussion topics if the text were used in a group or class. First, in more than one instance, Gutenson extrudes a tenuous principle from a passage of Scripture and then quickly draws implications from it. For instance, using Lev 19 as a paradigm for the construction of civil laws, he derives the idea that today, we fulfill Lev 19 by treating “all equally under the law” (p. 91). It is not entirely clear whether this is the core meaning of Lev 19 (if there is a core meaning), nor is it clear exactly how he came to this conclusion. Even more, this is not the principle that Jesus examines when he cites Lev 19. More explanation would have helped make his case convincing. Other central tenets, from the meaning of “holiness” to the necessity to “imitate God,” are presumed more than demonstrated. One or two examples are forgivable, but more robust footnotes would have eased the reader into Gutenson’s assumptions. By the end, there was a sense of working freely with the biblical material and a general acceptance of social contract theory apart from any biblical demonstration in its favor.

Second, because Gutenson rightly focuses on poverty and exploitation, it was surprising that he repeatedly advocates “curing” or “ending” poverty in toto. Even when examining Jesus’ statement, “the poor will always be with you” (Matt 26:11), he neglects the complex issues surrounding the culture of poverty that engenders so much of his discussion of the policies involved. In other words, there appears to be a theology undergirding his thoughts about perfecting Christianity’s poverty response that simultaneously appears to reduce poverty to a flat topic. Similarly, his brief discussion of homosexuality treats sexuality as a singular issue. No tip of the hat is acknowledged toward the complexities of gender identity, sexual attraction, or gay and lesbian differentiations. Of course, Gutenson is attempting to get his readers to think broadly about Christian responses to public policy, and so we should not expect in-depth treatments of each circumstance. However, there is no discussion of how Christians who want to think through these issues must distinguish diverse mitigating factors. In the end, poverty and homosexuality come across as monolithic concepts, and Gutenson does not offer an adequate enough grasp of the nuances behind social matters to aid a thoughtful Christian response.

Third, Gutenson argues convincingly for a canon-wide view of God’s special care for the vulnerable. In the first chapter, he advertises the Bible as the normative guide for thinking about public policy: “I intend for them [i.e., biblical passages] to serve as data points that will allow us to draw preliminary conclusions about the way God intends for us to live together” (p. 14). Yet in the final chapter, where all the conclusions are actually drawn, biblical data appear to be shelved in favor of contemporary theories in social and political philosophy. The connectives between the biblical data and the contemporary theories may be valid, but the author does not explore them.

Christians and the Common Good made me think deeply about my individual, ecclesial, and national participation in social issues. Gutenson forces readers to consider what God has said and measure our lives accordingly. But despite this helpful path laid down for Christians to think through policy issues, it is difficult to imagine a wide-reading audience. On the one hand, Gutenson uncritically cites the likes of Paul Tillich, John Howard Yoder, John Locke, Thomas Hobbes, Karl Barth, and Stanley Hauerwas in support of various positions. If the reader had any familiarity with this disparate group of thinkers, they would certainly want more interaction than cold approving quotations. On the other hand, he details the ethico-political thread sewn throughout Scripture’s meta-narrative as if his audience has little familiarity with those biblical texts.

Notwithstanding the concerns of this reviewer, this text fascinates and compels the reader to wrestle with the relevant biblical motifs. Benefits of this book as a discussion text in a church or classroom far exceed its areas in need of clarification. It deserves to be read in the church and possibly undergraduate classes, but with a critical eye toward fleshing out some of the deficiencies identified above.